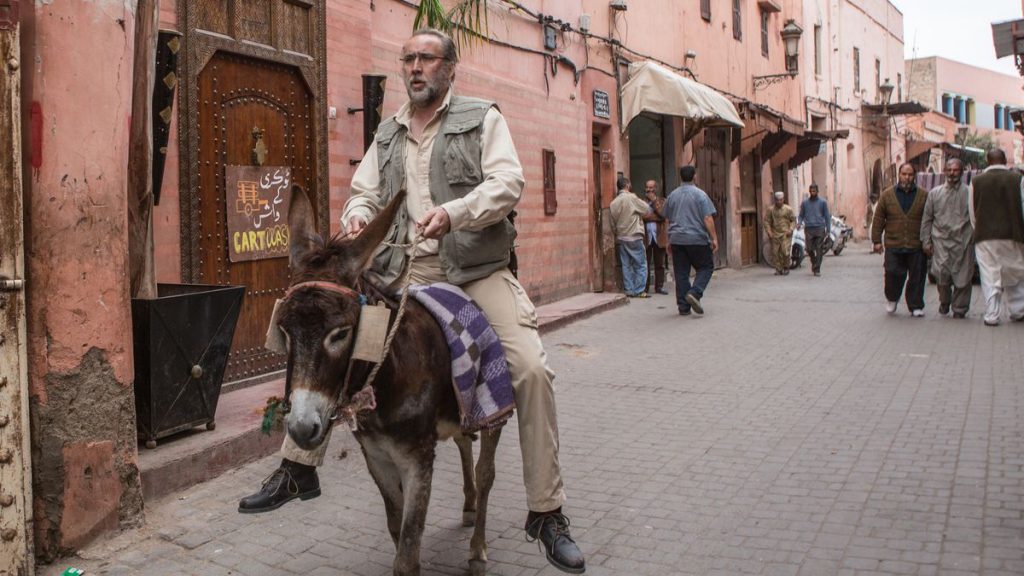 Nicolas Cage in the film Army of One riding a donkey.

Loosly based on the true story of Gary Faulkner (Nicolas Cage, Kick-Ass), an ex-con/unemployed handyman/alcoholic / pothead whom gets a calling from God (Russell Brand, Forgetting Sarah Marshall) to travel to Afghanistan to hunt down and kill Osama Bin Laden (Amer Chadha-Patel), armed with nothing but a sword and an undying drive to become a war hero.  Though his friends Roy (Will Sasso, MadTV), Pickles (Paul Sheer, The League), and girlfriend Marci (Wendi McLendon-Covey, The Goldbergs) show their support, they all try to delicately deter Gary from going on his quest to no avail. Gary perseveres through every setback to go forth and seek out this century’s biggest villain, and bring justice to the USA.

THE GOOD: As tired as you get at Gary’s insane tenacity, he is an absurdly lovable character.  I don’t see anyone else but Cage to play this eccentric dude. All of the characters are likable. I wish they used more of Will Sasso and Paul Sheer because those two are funny without having to say a word. I liked how they included clips of the real Gary Faulkner for the end credits.

THE BAD: I find it hard to believe that Gary could land himself a woman, even if it was someone on the edge of desperation like Marci. I guess they didn’t want him to seem like so much of a lost cause of a character, so they invented a love interest.  His antics were so frustrating I wanted some bad stuff to happen to him, and they did.  I don’t find that satisfying when getting invested in a film.  If you’re going to cast a comedian like Russell Brand as God, give him some better material or let him do some improv…however according to the featurette, they did allow the actors to improvise. Did they cut all the good shit out?

Director Larry Charles knows how to keep the pace going, but doesn’t lift the film up to comedic expectations. Dude, you directed Borat, I want to see something more outrageous. You don’t have to tone it down for us all to take you seriously.

ACTING: B
STORY: B
TECHNICAL: C

Cancel reply
Obit Movie Review: Would you like to live to 100?
Graduation Movie Review
To Top