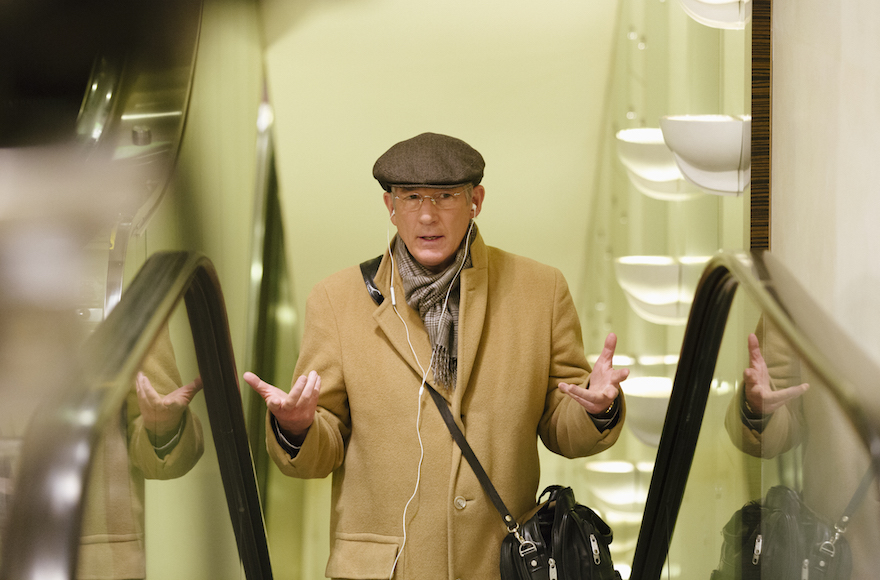 Perhaps you know the guy, or (horrors) you may recognize the guy in yourself.  He’s the kind of person whom psychologists would label a masochist, the fella who cannot make a genuine connection with anyone but believes that in order to have friends, you’ve got to offer them something besides your good company.  The truth is that Norman does not truly have something worthwhile to offer, and yet he succeeds in winning the loyalty, and even a transitory and ephemeral friendship with important people in the Jewish community.

But don’t think that psychoanalysis has only recently discovered such a person; a clinger, one who believes people will have reason to deal with him only if he can provide at least a semblance of a favor.  In the Jewish tradition, Norman serves as a modern incarnation of the court Jew, the person who gets the good will of the king only by doing the special favor that a banker can provide.  Since banking was one of the only professions open to Jews in past centuries (Shylock as a money lender for example), important Christians would rely on them to move money around.  This in turn would provoked trigger the envy of others in the kingdom, leading to an unhappy fall from favor for the man.

Norman (Richard Gere) could be called a fixer, one who would do things for others that others would not dare to do themselves.  In in Norman’s case, that would be to set up meetings between people who need something done for them and others who might do the favors.  Among the people Norman befriends is a Rabbi Blumenthal (Steve Buscemi), who fears that he and his congregation would be evicted from the synagogue for lack of payment.  Norman knows somebody who will anonymously provide seven million dollars, the only problem being that he doesn’t.

If you ask women on the street flat out, “Would you sleep with me tonight?” you might get quite a few slaps, but in time you will succeed in locating such as person.  Similarly, if you stop enough people on the streets of Manhattan, give them your card, and state that you could connect them with others, you may luck out after a dozen or more disappointments.  When Norman attends a speech by Micha Eshel (Lior Ashkenazi), a deputy minister of Israel, he follows the man down Manhattan streets, chats him up, even buys him a pair of thousand dollar shoes in an upscale store, attended to by salesman Jacques (Isaach de Bankolé).  The grateful fellow is willing to attend a dinner at the plush home of Taub (Josh Charles), but after being advised by people back in Israel to stay away from “the Normans,” Eshel is a no-show, making Norman treated like an interloper by the homeowner.

But when Eshel becomes Israel’s Prime Minister three years later and recognizes the man who was so nice to him when Eshel was in New York, Norman is in his glory, is photographed like a rock star, and realizes that his horse has come in.  How this sudden rise to fame leads to a fall from grace is not entirely clear from the plot, but director Joseph Cedar, whose “Footnote” in 2011 focuses on a father-son team of professors of Talmudic studies and involves a nasty embarrassment for the dad, again deals with the see-saw of incidents that show life as a process of highs and lows.  Because of an investigation of the prime minister by one Alex Green (Charlotte Gainsbourg), Norman has to make the most important decision of his life.

Cedar films in Manhattan and part in Tel Aviv, using Hebrew with English subtitles in just a few scenes of this U.S.-Israel co-production.  The theatricality is impressive: toward the conclusion, Norman is on the phone with several of the people he stalks, both standing just a glass wall away from each other though separated by seven thousand miles.  Gere, no longer in the sexy, romantic roles that audiences enjoyed sixteen years ago in “Pretty Woman” and as a gynecologist in 2000 in “Dr. T and the Women,” performs well enough that we in the audience cannot help feeling sorry for his character when he meets resistance now and them and ultimately falls through the cracks.  As the charismatic prime minister, Lior Ashkenazi inhabits a clever, sometimes humorous supporting role which, while putting the spotlight on the Jewish community in New York and on the politics of Israel in Tel Aviv, can travel considerably outside any niche audience. After all, many of us either regularly or occasionally are afflicted with Norman’s meshugas.