The villain in ‘The Mummy’ is the hero of her own story, director Alex Kurtzman exclaims in a newly released behind the scenes video for the anticipated action movie. The latest promotional clip for the reboot of Universal Pictures‘ ‘The Mummy’ franchise teases the five stages of transformation that the antagonistic title character, Princess Ahmanet, experiences in the upcoming thriller.

The video, which is titled ‘The Mummy Exclusive Interview: Meet the Mummy,’ and is presented by Syfy Wire, offers audiences the chance to witness the series of transformation that Princess Ahmanet goes through before she takes her final form. The clip includes interviews with lead actor, Tom Cruise, as well as Sofia Boutella, who portrays the title character. Kurtzman and key crew members on the film, including
Erik Nash, the visual effects supervisor; Lizzie Georgiou, the makeup and hair designer; and David White, the special effects makeup designer, discuss Ahmanet’s backstory.

Boutella notes in the video that her character was once a princess who was promised to become a pharaoh in ancient Egypt. But that destiny was taken away from her, and she was instead mummified. White describes how Ahmanet begins her modern day transformation as a bag of bones that’s held together by rags. When the former princess then begins her feeding frenzy, she transforms into the being that battles Cruise’s character, Nick Morton, and his allies.

Kurtzman also noted in the clip that Ahmanet being the hero of her own story allows viewers to connect with the character. He further explained that he feels Boutella was amazing in bringing that emotional aspect to life, and Cruise agreed that his co-star was perfectly cast as the title character. “What I feel really separates great monster movies from other typical horror movies is that there’s a real emotional investment in the characters,” the director also stated.

The upcoming version of ‘The Mummy‘ serves as the first installment in the Universal Monsters shared universe. The fantasy film, which was written by Jon Spaihts and Christopher McQuarrie, is set to be released in theaters on June 9 by Universal Pictures.

The following synopsis for ‘The Mummy‘ has been released:

Thought safely entombed in a tomb deep beneath the unforgiving desert, an ancient princess (Sofia Boutella), whose destiny was unjustly taken from her, is awakened in our current day, bringing with her malevolence grown over millennia and terrors that defy human comprehension.

From the sweeping sands of the Middle East through hidden labyrinths under modern-day London, ‘The Mummy’ brings a surprising intensity and balance of wonder and thrills in an imaginative new take that ushers in a new world of gods and monsters.

In addition to Cruise and Boutella, ‘The Mummy’ also stars Annabelle Wallis, Jake Johnson, Courtney B. Vance and Academy Award winner, Russell Crowe. In addition to directing the horror film, Kurtzman, who has previously worked with Cruise on the ‘Mission: Impossible’ series, also produced their latest collaboration. 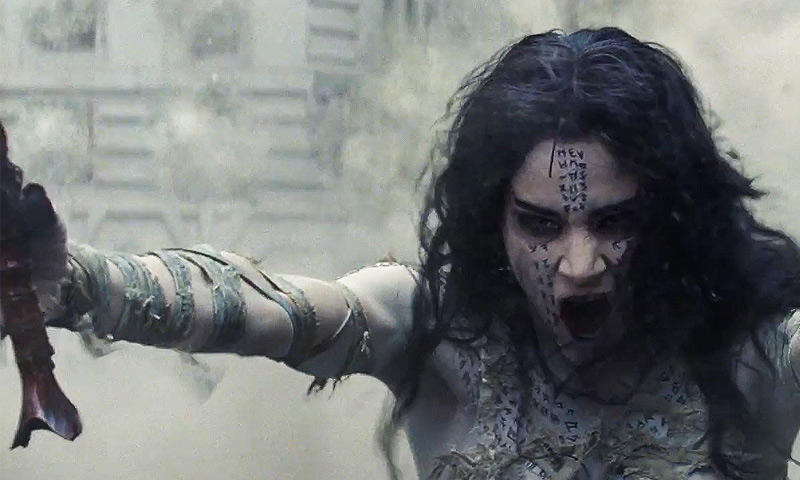 Sofia Boutella portrays Princess Ahmanet, the title character in Universal Pictures' anticipated action thriller, 'The Mummy.' The clip describes her backstory and the series of transformations that she goes through before she takes her final form in the movie.