Trying to fit into a new social situation can be difficult for anyone, even the seemingly most established adults. Chris Kattan is experiencing that challenge first-hand in his new comedy, ‘Breaking Legs.’ In honor of the actor desperately trying to relate to his colleagues in the family film, which is now available on VOD and DVD, courtesy of Vision Films, Shockya is premiering an exclusive new clip.

‘Breaking Legs’ stars Liv Southard (‘Good Enough, ‘Horror Haiku’) as Bloom, a high school freshman who has just moved to a small town, where the only place to dance is the school’s dance team. Alexa Sutherland (‘Sweet/Vicious’) plays the role of Harmony, Bloom’s nemesis, who is willing to go to any length to keep her biggest competitor off the team.

Rounding out the cast is William Leon as Bloom and Harmony’s love interest, Herbie; Sarah Rochelle as Bloom’s best friend, Gracie; and Richard Riehle as the school’s atypical principle. Mark Marchillo, who made his feature film writing, directing and choreography debuts with the teen dance movie, stars as Bloom’s aimless uncle.

Vision Films has released the following synopsis for ‘Breaking Legs’:

When new-to-town freshman Bloom meets her classmate Harmony, it’s loathing at first sight. Bloom just wants to dance, but the only place to strut her stuff is the school dance team…captained by none other than the number one mean girl herself. When Harmony’s boyfriend falls for Bloom, what starts out as unfriendly competition quickly becomes an all-out war.

Bloom’s only shot at her chance to fit into this new school and get on the dance team is to win the Honor Girl top prize. But not even her best friend or her uncle – who is trying to contend with his boss – can help her. But Harmony won’t concede the competition or her boyfriend without a fight!

Speaking about the teen dance comedy, Mark shared: “‘Breaking Legs’ is a fun, funny and quotable movie that teens and tweens will relate to. We thought it important that the film’s characters ring true, with teenage actors playing their real ages. It’s a kick-up-your-heels kind of entertainment, with a lot of heart for every age. I hope everyone enjoys ‘Breaking Legs’ as much as we enjoyed making it.”

The Managing Director and CEO of Vision Films, Lise Romanoff, also spoke about the family movie, and noted: “This film captures the innocence and energy of other high school competition classics such as ‘Girls Just Want to Have Fun’ and ‘Bring It On.’ We’re thrilled to offer this upbeat film to young audiences and dance lovers across the country.” 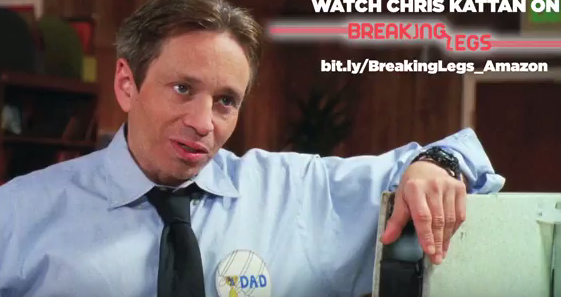