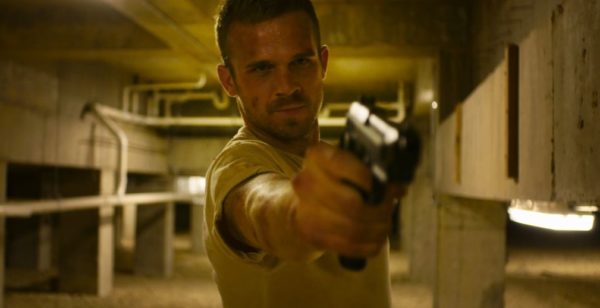 Guarding and maintaining the values you firmly believe in is a powerful fight worth taking on, no matter what circumstances you face in the struggle. That compelling courage is the intriguing driving force for the characters, as well as the cast and crew members, of Cam Gigandet‘s new action film, ‘Black Site Delta.’ The actor boldly portrays the courageous protagonist in the drama, which smartly highlights the daring take-charge attitude his character takes on while he fights for his freedom.

‘Black Site Delta’ follows a despondent war vet, Jake (Gigandet), who mysteriously wakes up to find himself in a secret maximum security military prison after he was involved in a violent bar altercation. After meeting several other prisoners, including Vasquez (Teri Reeves), Jake realizes that they’re being kept in a black site prison for special cases. The group also discovers that the prison is serving as a cover for a secret drone control operation.

While the general public has no knowledge of the prison’s existence, terrorists have become aware of the drone command center, which is hidden within the building. The terrorist group has plans to take out a major U.S. city, unless Jake, Vasquez and their fellow inmates manage to take control of the situation.

Gigandet generously took the time recently to talk about starring in ‘Black Site Delta’ during an exclusive phone interview. Among other things, the actor discussed how he signed on to play Jake in the action drama before he even read the script, as he admired Gustafson’s previous directorial efforts in one of his acclaimed short films. Gigandet also embraced the experience of collaborating with not only the helmer, but also his co-stars and the rest of the crew, who all seamlessly banded together in order to make a realistic independent action movie.

The interview began with Gigandet describing why he was interested in starring as Jake in ‘Black Site Delta,’ and how he became involved in playing the action movie’s protagonist. “Before my manager even sent me the script, I was given the director, Jesse’s, short film (the 2015 thriller, ‘Day 39’) that was nominated for a Student Academy Award. After I saw that, the script (for ‘Black Site Delta’) didn’t really matter. I signed on so that I could work with this director. I thought he was special and the real thing at the time, and I still think he is,” the actor revealed.

“Once I then read the script, it all fell into place. We then began talking, and then all of the pieces began to fit. It was a lot easier than most jobs!” Gigandet also exclaimed.

Further speaking of his experience of developing the character of Jake with Gustafson, especially since the latter made his feature film directorial debut on the drama, the performer disclosed that the helmer “had a hard job, and I don’t envy that at all. But I admire him. Jesse’s the person that everyone went to with their problems, and he handled everything with poise and a calm nature.”

Gigandet also admitted that “Even though we didn’t have a lot of money or time, and we had a lot of young actors, when we looked at Jesse, everything just seemed calm and the way it was supposed to be. That resonated with everyone, and it was one of the best things on the set.

“As far as I go, I’m all over the place, and when things start falling apart, I go crazy,” the actor also confessed. “But whenever I looked to Jesse, he acted liked that was the way it was supposed to be. So it was a pleasure to work with him, and I would love to do it again.”

Gigandet then noted how ‘Black Site Delta’ was shot in Jackson, Mississippi, “and we all stayed in the same hotel. So we all got to spend quite a bit of time together! The film is all about our camaraderie, closeness and group mentality,” he explained as he began speaking about his working relationships with the rest of the cast, including Reeves, Benjamin Charles Watson, Dion Mucciacito, Casey Hendershot and John Brodsky.

“It was like it was us against the rest of the world. It was this small group of people who didn’t have any money, but who were trying to make a film anyway. Everyone was on the same page and fighting for the same thing,” the performer also stated. “That was special, and I think that was the whole goal, especially for Jesse.”

With ‘Black Site Delta’ being driven by Jake and his fellow inmates fighting the terrorist group that invades their prison, Gigandet admitted that the process of creating the physicality and stunts for the movie “was tough, since we didn’t have a lot of money. Since we didn’t have a bigger budget, the insurance didn’t like to pay for a lot of things,” the actor disclosed with a laugh.

“So we had to think a little bit more when we were working on creating the stunts, and finding out what worked best to tell this story. It wasn’t just about having these grotesque stunts that were just for show. It took a little bit more thought to keep things safe and within our budget, but that was kind of the fun of it,” Gigandet also shared.

“But that was also the challenge-we had to tell an action story that had to get a little bit clever when it came to the stunts. That was part of the collaboration of it-everyone was throwing out ideas of how we could make things suspenseful, while also keeping them in a world that’s plausible. So we had a lot of conversations about to keep things suspenseful and crazy, while keeping them in our realistic world,” the performer added with a laugh.

Gigandet then provided more details on the process of shooting an action film like ‘Black Site Delta’ independently, and how the experience influenced the creativity on the set. “When you’re making independent movies, you have to focus the story more on the characters and their relationships. But with bigger budget studio films, you can rely more on the money you have to create bigger special effects, production value and stunts.”

But with ‘Black Site Delta,’ “we had to be all about the story and the characters’ relationships. The further you delve into that element, the better story you’re going to tell. That’s both the challenge and the best part of making an independent film,” the actor also conceded.

Also following up on the experience of shooting the movie in Mississippi, Gigandet noted that since most of the drama’s story is set in the black site military prison that the Jake and his fellow inmates are trying to escape from , the majority of the film was shot in a real prison that was still active. “Anytime you’re on location in an environment that resembles what the story’s setting is supposed to be, and you’re in a place that’s away from your home, it simply makes your job that much easier. It’s easier to step into” the movie’s world when you’re shooting on location, the performer acknowledged. “All of your senses are tuned into this new environment when you’re on location, which made all of our jobs that much easier.”

‘Black Site Delta’ is one of the latest indie films to receive a simultaneous theatrical and On Demand distribution deal, and Gigandet admitted that his feelings go back and forth on this type of release. “Obviously, I want as many people to see the movie as possible. My only problem with releasing it in theaters and On Demand at the same time is that people may not want to see it in theaters, when they can watch it from the comfort of their own homes,” the actor pointed out.

“That may just be the way things are going, and I can accept that. But I love going to the theater. Whenever I have the opportunity to see a movie in a theater, I prefer doing that,” Gigandet revealed. “But I’m afraid that if people have the option to stream films at home, they’ll do that. These movies are shot with the idea that they’re going to be seen on a big screen. But at the end of the day, we ultimately just want people to see the stories that we’re telling, and we appreciate when viewers watch our films whenever and however they can.”

Another aspect of the filmmaking business that the performer has noticed has changed since he started his career is that “Not as many movies are being made as they used to be. But I just want to continue to have the opportunity to keep doing a variety of things, and anything that’s new. From the beginning, I’ve wanted to do whatever I can do that scares and challenges me, whether it’s comedy, action or any other genre. I’m always interested in trying anything new, so variety has always been the name of the game for me.”

Cancel reply
The Dinner Review: Brings out all the complexities of the novel
A New Civilization Begins with Blade Runner 2049’s Facebook Q&A Event and Trailer Debut
To Top