Some of the most seemingly successful people thrive in life because they fiercely hold onto a God-like superiority complex. But those people often realize that they’re not as prosperous as they wish to believe, as unexpected obstacles can question their invincibility. That rising doubt over their invulnerability is one of the intriguing sources of conflict in the new STARZ fantasy television series, ‘American Gods.’

Actress Emily Browning, who plays Laura Moon, the recently deceased wife of the show’s protagonist, begins to realize after she’s resurrected that she’s not actually emotionally and mentally indestructible. The formerly egocentric woman also begins to understand the importance of having such a loving husband, and decides to do whatever it takes to reunite with him.

Bryan Fuller and Michael Green the are writers and showrunners on ‘American Gods,’ which is Starz’s television adaptation of the 2001 Hugo and Nebula Award-winning novel of the same name by Neil Gaiman. The book and show’s plot follow the war that’s brewing between the traditional gods of mythological roots from around the world, who are steadily losing believers to an upstart pantheon of gods reflecting society’s modern love of money, technology, media, celebrity and drugs.

Shadow Moon (Ricky Whittle) is an ex-con who becomes bodyguard and traveling partner to Mr. Wednesday (Ian McShane), who appears to be a conman but in reality is one of the older gods. The duo embarks on a cross-country mission to gather Mr. Wednesday’s forces in preparation to battle the new deities.

The fourth episode of the cable series’ current first season, which is titled ‘Git Gone,’ is set to premiere tomorrow at 9PM ET/PT. The episode alternates between the past and the present, as Laura’s life and death are explored. It also retells the events of the previous three episodes from Laura’s point of view, and expands on her character from the book.

The episode also showcases how Laura met Shadow, how she died and how exactly she came to be sitting on the edge of his motel room bed. Laura and Shadow discuss what happens after she died.

Browning generously took the time recently to participate in a roundtable interview at the Langham Hotel in New York City to talk about starring in ‘American Gods.’ Among other things, the actress discussed how Laura’s life starts to change when she meets Shadow, as he’s the one person who’s finally able to elicit true emotions from her, even if they’re initially feelings of danger. Browning also mentioned that she loves how Laura is presented in Gaiman’s book, but pointed out that it doesn’t provide audiences with many details about her history. So the performer feels it’s beneficial that the show is sharing more information about her character, and why she is the way she is, outside of her relationship with Shadow.

The actress began the conversation by discussing how Laura seems to be bored as she goes through both life and death, until she meets, and reunites with, Shadow. “I think it was Bryan who said that death was the best thing that ever happened to her, and I think it’s true,” Browning revealed with a laugh. “In life, she’s lost and doesn’t really know what she wants. But she does know that she doesn’t want the life that she has.”

But Laura’s life seems to change when “she meets Shadow. But he’s a dangerous criminal, and is coming to rob the casino. That was exciting for her-she wanted to feel something. One of my favorite scenes is the first sex scene between them,” the performer admitted. “He’s being super gentle and romantic…but she needs to feel something more. Then to her horror, he becomes this perfect husband who gets a straight job.”

When Laura later dies, “I think she realizes that she does love him, and love is the only good thing that she remembers from her life, but she never noticed it before. The only thing that ever felt comfortable and real to her is him. So it becomes her mission to get him back, which is ironic, since she’s not a romantic or loving or lovable character-she’s kind of awful! But her journey is to try to find him and get him back,” Browning divulged.

The actress then admitted that the first time she watched the pilot for ‘American Gods’ was at this year’s SXSW “with hundreds of people. I started one of the big applauses during the screening.” She added that she enjoys watching the show, especially with an audiences, because the storyline “isn’t just about nudity and sex…it’s also sad and tender.

“One of my favorite sex scenes in the show is the one between Salim and The Jinn. I feel so often during a gay sex scene, people look away and think, I’m not going to watch this, which is ridiculous. The fact that you see the whole thing makes it so tender and human, and also very sexy! I feel like Bryan and Michael don’t want viewers to look away,” Browning further noted.

When the performer first signed on to star in ‘American Gods,’ “the first five episodes were written. When we then received the scripts” for the last three shows of the current eight episode first season, “I could tell that the way the characters were then being written was based on the actors’ performances. So as actors, we all felt as though we had a part in shaping our characters.”

Browning added that she loves the character of Laura in the book. “But you don’t get to learn much about her history. She’s integral to the story, but only exists in relation to Shadow. So I think it’s important to learn more about her, and why she is the way she is. Then you can empathize with her a little bit more when she does all of these morally questionable things.”

The current first season of the show only delves in the world that’s presented in the first 100 pages of Gaiman’s novel, the performer also revealed. “Instead of removing things from the book, we’re expanding on it. Hopefully we’ll have more seasons, because we want to get to the end” of the book, she added with a laugh. Earlier this month, which was several weeks after the interview was held, STARZ announced that it had already renewed the series for a second season.

Now that Laura has visited her husband after her death, Browning hopes that her character will find a fulfilling message and peace in the after-life. “There’s a scene between Laura and Shadow where she says, ‘When you die, you rot.’ Then she dies, and Anubis says to her, ‘You believed in nothing, so you’ll go to nothing.’ Then she’s like, ‘I knew it!’ So she’s pleased that she’s essentially right.

Laura isn’t a philosophical person, Browning also explained about her current character, which is partially what drew the performer to the role. “I think after she dies, she’s just as unaware of other people’s feelings” as she was during her first time on Earth. “But now, she does care about Shadow, and that’s all that she’s thinking about…she’s completely arrogant. She says, ‘It doesn’t matter that I’m rotting-he loves me.’ She’s not a very self-aware, kind or thoughtful person. She has her mission. So I’m really excited to see what happens when she and Shadow finally reconnect,” Browning admitted. She added with a laugh, “I think when they do reconnect, it’s going to bring her back down to Earth a bit!”

The character of Laura “isn’t a model of how you want to act,” the actress also affirmed. “But one thing about her that’s inspiring to me, and hopefully inspiring to girls, is to see a girl on TV who doesn’t give a sh*t about what anyone thinks about her…As a people-pleaser myself, to be able to play someone who really couldn’t care less,” was a powerful experience. At her core, Laura is inspiring type of character that the performer wishes she had more of chance to play throughout her career.

“I feel really proud to be part of a show that’s entertaining enough that it will make people not always think about everything that’s going in their lives. Hopefully we were able to marry” the entertainment value with the reflection on current events, especially in politics, Browning also declared. “It’s nice to be part of a show that has something to say, and doesn’t look away from it, like in the Jinn and Salim sex scene.

“Laura doesn’t have a difficult life. There’s a moment later where she goes back to her childhood home, and you see that she’s become a spoiled brat throughout her life,” the actress disclosed. “I think Laura is someone who’s life isn’t desperately bad, but she doesn’t know how to feel joy. She’s one of those people who’s always numb and confused. I think when you know that about her, you might empathize with her a little bit more.”

Browning lastly declared how much she admires Fuller and Green’s decision to show the full emotional versatility of female characters on the television adaptation of ‘American Gods.’ “I think the fact that we’re seeing more of these characters who are a mess, and don’t know what they want from their lives, is cool. I wish I had more of that when I was a teenager-I would have loved to see women on TV who represent me and my messy brain!” 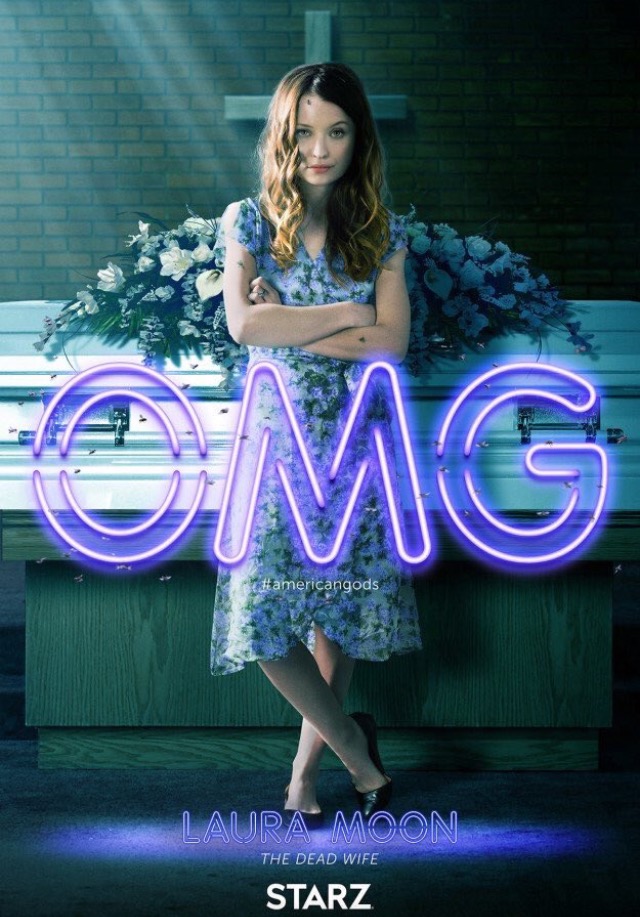