Effortlessly transforming and adapting to an gripping new environment is a powerful motif in the new Universal Pictures’ action reboot, ‘The Mummy.’ Not only does the drama offer a powerful new take on the monster genre, as it features a woman as the title antagonist, but it also marks director Alex Kurtzman‘s first time helming a major studio tentpole movie.

Also powerfully establishing himself as a reliable presence in the blockbuster world is actor Jake Johnson, who previously garnered widespread recognition when he starred in ‘Jurassic World.’ After appearing in such indie darlings as ‘Safety Not Guaranteed,’ ‘Drinking Buddies‘ and ‘The Pretty One,’ as well as the hit FOX sitcom, ‘New Girl,’ Johnson is a memorable addition to the first installment of the Dark Universe, the shared universe of the rebooted versions of the original Universal Monsters. The performer brings his natural charm ad comedic relief to ‘The Mummy,’ which opens in theaters today.

‘The Mummy‘ follows Nick Morton (Tom Cruise), an Army sergeant who secretly loots artifacts from Iraqi war zones and then sells sells on the black market, with the help of his fellow sergeant and friend, Chris Vail (Johnson). Nick and Chris are currently working in the area of the country that’s historically known as Mesopotamia, and are searching for antiquities that are included on a map Nick stole from archaeologist Jenny Halsey (Annabelle Wallis). Jenny manages to track Nick and Chris down just as the duo inadvertently stumble upon an ancient burial site.

The trio is then ordered by Nick and Chris’s superior, Colonel Greenway (Courtney B. Vance), to examine the site, which includes a mysterious Egyptian coffin. Jenny marvels at the meaning of finding an Egyptian tomb in what was once Mesopotamia that she insists that Nick help her exhume it. But the archaeologist’s rash decision soon proves to be dangerous, as she realizes that the body in the coffin belongs to Ahmanet (Sofia Boutella).

After doing some additional research, Jenny discovers that Ahmanet was once the sole heir to Egypt’s throne. However, her guaranteed fate was taken away from her when her father remarried and had a son with his second wife. Determined to hold onto her destiny to become Queen and carry out revenge, she made a pact with the Egyptian god Set. But before she could carry out her human sacrifice, she was captured and mummified alive. The ceremonial dagger with which Ahmanet was planning on using for the sacrifice was split into two parts, with one of the pieces being buried in a crypt in England that dates back to the Second Crusade.

When one of the pieces of the dagger is recovered at the same time that Ahmanet’s body is discovered, Jenny’s colleague, Dr. Henry Jekyll (Russell Crowe), takes possession of it. The doctor is determined to defeat all threats of evil, especially Ahmanet, since he’s forced to continually take drugs to subdue his own monstrous alter ego. But Ahmanet doesn’t respond well to the threat that Jenny and Jekyll pose over her in their quest to stop her, as her immortal spirit has developed a fixation on Nick. With the help of his seemingly new allies, Nick also tries to stop the title monster’s control over him, as well as her determination to once again reign supreme over the world.

Johnson graciously took the time recently to talk about portraying Chris in ‘The Mummy‘ during an exclusive phone interview. Among other things, the actor discussed how he was interested in working on the reboot because Kurtzman was generous enough to immediately offer him the role of the sergeant, and also proved what a compassionate director he was to collaborate with once filming began. The performer also mentioned how he embraced the chance to work so closely with Cruise on an action-adventure film, as well as the opportunity to practically shoot their stunts in real locations across England and Africa.

The conversation began with Johnson explaining that he became involved in ‘The Mummy’ because Kurtzman “FaceTimed me, and during that meeting, he said he wanted me in the movie. So that was a really cool call. I didn’t read the script at that point, because there wasn’t even one yet,” the actor revealed. He added that he “wasn’t sent the script until way later. It’s one of those projects where the script kept changing and evolving as the writers went along.”

Another one of the key elements that drew Johnson to accept the role of Chris after the director offered him the role was “the opportunity to work with Tom Cruise. I liked the idea of being able to make an adventure film with Tom,” and see how one of the world’s biggest stars in the action genre approaches his work.

Johnson further praised both Kurtzman and Cruise by initially noting that the helmer “is a great guy. He’s really collaborative and open, and really loves working with actors. He has a really calm demeanor, which is really helpful on a movie like this. What I really like about Alex is that he is who he says he is. So the person he told me he was, and what he said he wanted, during that first call, is still the same today. He’s a guy I have a lot of respect for in life,” Johnson revealed when he shared his feelings about the filmmaker.

The supporting actor also admitted that while Kurtzman had great ideas for ‘The Mummy,’ and he really enjoyed collaborating with the director, the fantasy film is “really a Tom Cruise movie. So he was really the leader of the ship, and had a take on everyone’s character. When you take part in a Tom Cruise movie, it’s because you want to do it. So we all wanted to make a movie that would make him happy. So that experience was pretty cool, and I was happy to be involved in that process,” Johnson explained.

Many of Johnson’s scenes with Cruise and Wallis are action-driven, as they work together to reveal what’s in the underground tomb they have uncovered. The performer explained what the process of working with his co-stars, particularly Cruise, on the stunts and physicality for their scenes. Johnson disclosed that they filmed most of their own stunts practically on the set. “There wasn’t too much CGI with the stunts. (**SPOILER ALERT**) But I know that they did CGI with my face, with all of the mummy stuff. Tom wanted to do a lot of the stunts in camera,” the actor indicated.

Further speaking of the make-up, Johnson then explained what the process of creating the overall look for Chris was like, especially after he undergoes his transformation after he’s bitten by spiders that were in Ahmanet’s tomb. His look was created practically, so the performer had to undergo three hours in the make-up chair every time he filmed scenes that take place after Chris’ metamorphosis. “I think Alex’s idea was that he wanted an option to not have to use CG if he didn’t want to, and just use the prosthetics,” the performer divulged. He added that he thought the practical make-up looked good enough to include in the final version of the action film. “But in the end, I think they also decided to sink in my cheeks and mess with my eyes during the CG process, since we didn’t do that with the prosthetics. So I think they used both” the practical make-up and the prosthetics in the end. (**END SPOILER ALERT**)

With the fantasy movie being filmed on location in such places as London, Oxford and Surrey, England, as well as the Namib Desert in southern Africa. Johnson admitted that an actor, he likes shooting on location. He explained that filming in actual places makes the shooting process “interesting, in terms of life experiences. I never thought I’d get to go to Africa. The continent and country of Namibia is gorgeous. Shooting in England was also really great.”

But the actor also conceded that he does also likes filming on soundstages. “I’m also on the TV show, ‘New Girl.’ What I like about it is that we film on a good soundstage. But for me, it depends on the experience. With ‘The Mummy,’ it’s such a big, epic movie that I think Alex wanted the adventure of shooting in real locations to be part of the fun,” Johnson added about his varying experiences of filming on location and on soundstages.

One of the most interesting aspects of ‘The Mummy’ was the comedy and banter between the characters, particularly Chris and Nick. Including that comedic element in his projects, particularly an action-driven genre film like ‘The Mummy,’ is something that the performer enjoys. “Honestly, I was just trying to do what was on the page. But I really liked working the scenes with Tom, and having Alex as our director. I also enjoyed working with Courtney B. Vance. His performance on the O.J. show (‘The People v. O. J. Simpson: American Crime Story’) as Johnnie Cochran was so good. Annabelle Wallis was also so good. So the thing I liked the most about making the film was working with my co-stars,” and creating the humor between their characters.

With ‘The Mummy’ being a reboot of the iconic monster movie franchise, Johnson admitted that “Funny enough, I’m not really a fan of the genre. I’m not usually a big movie monster type of guy, but I was excited to be a part of this film. This movie seems to be a true reboot, so I’m curious to see what Universal does next with this franchise. I’ll definitely be checking it out.”

Now that ‘The Mummy’ has been released, Johnson added that he would be interested in starring in more Dark Universe films. While “There aren’t any plans right now” for the actor to reprise his role of Chris in future projects, he admitted that he’s “open to anything, depending on who’s involved and the material. I’m open to hearing about anything that’s cooking!” 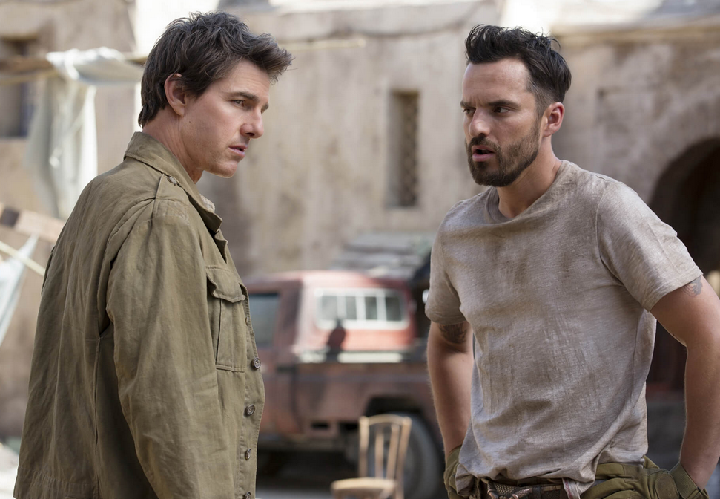