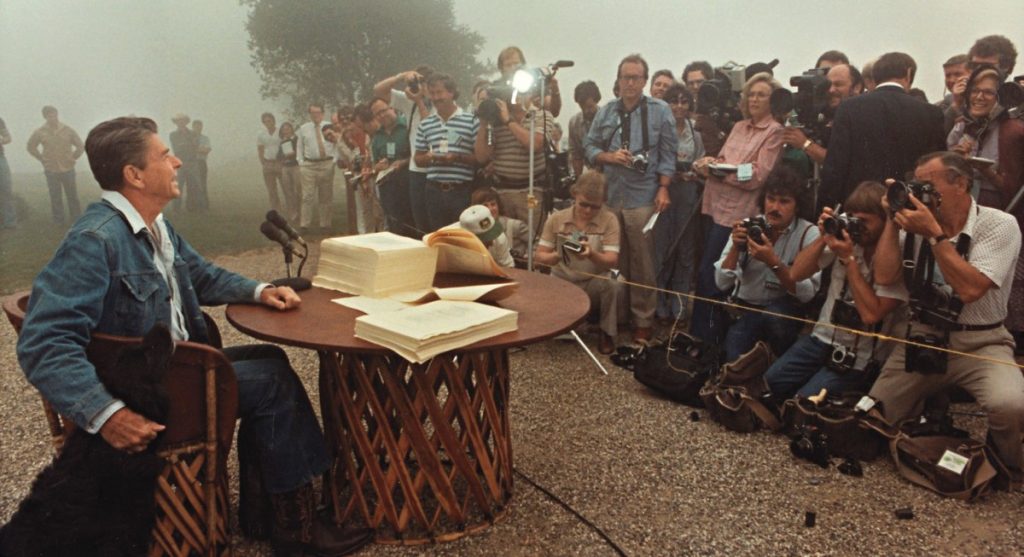 Elderly woman to General Secretary Gorbachev of the Soviet Union:

Woman: “Who invented Communism: a politician or a scientist?”
Gorbachev: “A politician.”
Woman: “I thought so. They should have tried it first on mice.”

This is one of the gags in a vivid documentary about President Ronald Regan, a man whom conservatives today lionize as the greatest commander-in-chief of his century, one responsible for much of the progress that the United States has made during his two terms in office. Reagan himself would doubtless get a charge out of the joke. He was not fond of Communism. He called the Soviet Union part of an Evil Empire. But like Dick Nixon, similarly conservative yet the man who “opened” China, Reagan would change his mind and confess that his view of the USSR might have been true then, but were hardly the same now.

In dealing with the Soviet Union, Reagan’s most famous quote is “Trust but verify” regarding his way to handle America’s chief adversary, a term he used over and over during photo-ops and was kidded about it by Gorbachev during one of the times they got together. The two leaders competed for the world’s attention not so much by talking about guns and bombs, but who could be the more effective communicator.

Pacho Velez and Sierra Pettengill’s stunning documentary is unusual in that it throws aside the dull convention of interviewers getting answers from subjects. Instead, “The Reagan Show” is composed one hundred percent of archival films, the directors going through one thousand hours of tape to cherry-pick the most entertaining moments of Reagan’s presidency, and that would include the bloopers he made in his TV addresses.

It’s called “The Reagan Show” for a reason, as the fortieth president (1981-89) was the first to take on the Oval Office as a former Hollywood actor. Though Ronald Reagan was a B-list performer throughout his career with fifty-three Hollywood films under his belt, he was a class act in front of the TV camera, able to charm the American people as well as he did a chimp when he appeared in “Bedtime for Bonzo” in 1951.

Missing from the doc was the tragic scene of his attempted assassination which he miraculously survived, since Velez and Pettengill are intent to focus on his abilities under the camera, and especially the way he competed with the Soviet counterpart who was as equally seductive. A highlight of the movie is the outtakes, comments made by the president before or after the taping sessions, such as when he has to read his campaign message for John Sununu who was running for New Hampshire governor on a program to lower taxes. Reagan had to go through the speech three times as he seemed unable to pronounce “Sununu.” In another situation he practiced two or three words of Russian, for use in a broadcast to the people of the Soviet Union, wishing them a happy new year as though the U.S. and the Soviet Union were the best of friends.

When members of the press or the public would shout after him with their questions, Reagan would dodge and wave as though he needed a consultant to write polished replies, though this tactic could be said to improve his popularity as he avoided saying something that might alienate either the right or the left. In one major issue he held a firm opinion, and that was to draw an agreement with the Soviets on reducing arsenals of weapons. Gorbachev insisted Reagan give up the Strategic Defense Initiative (SDI) known as Star Wars, by which the president claimed to be able to shoot down enemy missiles in the air—a provocative policy in that this technology would upset the balance of power between the two countries. In one of the film’s rare use of graphics, we get to see how this would work. So far as we know today, Star Wars either functions on a limited basis or is of no use at all.

Some opponents of Reagan like to say that the president did not have a grip on reality. He thought for eight years that he was in a movie. Somehow we all pulled through without getting blown up, a blessing we hope for during the term of the present administration which is led by a fellow who may think that he’s in a reality show. Mostly we come away after seeing this highly absorbing, entertaining and laid-back documentary with the view that acting skills win votes. If you can communicate with the public, there is no limit to what you can politically achieve. John F. Kennedy became aware of that concept when he showed the TV audience that he was no naïve kid and could easily handle the challenge from Richard Dixon. Arnold Schwarzenegger became governor of California, defeating sixty opponents. Do you think that’s because of his experience in government? Donald Trump, a TV actor as well as developer, emerged the victor from a group of sixteen Republican primary opponents, following a win over the expected Hillary Clinton administration. There is little doubt that Trump’s advisers, at least those whose counsel he is willing to accept, have learned the lesson taught by Ronald Reagan. Since TV has become the leading medium, the ability to charm, seduce, transfix the American people is the key to the Oval Office.