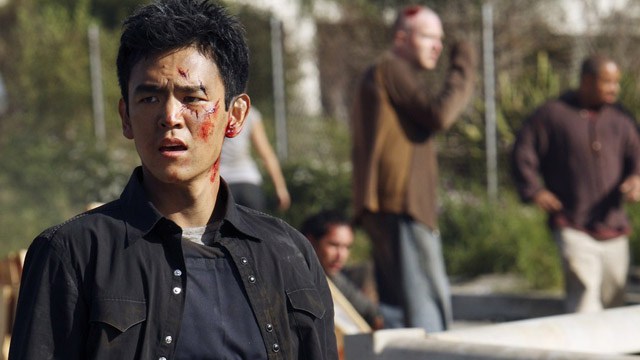 Don’t write off Columbus, Indiana because it is the birthplace and home town of Mike Pence. It nonetheless has charm, and if you can say that a town has charisma, then Columbus has that as well. Unlike the Vice President, the town has also inspired a number of people with intellectual heft at least in this dramatic narrative by Kogonada, who in his breakthrough contribution as director focuses on five of its residents, some temporary, others long-term. The film unfolds as though a theatrical piece, though the modern architecture, for which Columbus is known and hosts a regular crowd of tourists, is a central player.

Make no mistake: “Columbus” is about as far as you can get from a movie like “Spiderman,” “Terminator” or “From Russia with Love.” In fact, if you don’t listen closely to the dialogue—and this is a heady dialogue-centered piece—you might think that the picture lacks conflict. The conflict, however, is in the minds and hearts of its principal players, who are Jin (John Cho), Casey (Haley Lu Richardson), and to a lesser extent Gabriel (Rory Culkin) and Parker Posy in the role of a colleague of Jin’s father.

Much is made of architecture, not simply in its look at the designs of some of the masters of the profession but on its healing power. Jin, in the town because his father is in the local hospital in a coma, meets the much younger Casey, and through the young woman’s talks on Columbus, Jin becomes aware of the “healing power of architecture.” In a long series of conversations, first between Casey and Gabriel—the latter as an intellectual slacker who hangs out in the library where Casey works—Casey has much to teach the older man. He trusts her with innermost thoughts, the most disturbing being that he is not only estranged from his dad but does not care whether he recovers or dies. He explains that in Korea, children of terminally sick parents are expected to be by their bedside and to show over-the-top emotions over the elders’ deaths. While Casey is taken back by this admission, she is inspired by the older man, who at various moments in the story could turn their friendship into a romance.

If you savor intellectual conversations, say, the sort on exhibit in the dialogue between Wallace Shawn and André Gregory in “My Dinner with André,” you will find appeal in this theatrical piece. Haley Lu Richardson is adorable, looking about nineteen with a fresh, clean image and in one all-too-brief instance executing a passionate solo dance together with screams. And John Cho respects their differences in education and age, limiting his role to digging deeply into Casey’s life story while inspiring her to give up her too-close attachment to her former drug-addicted mother (Michelle Forbes).

In her central role, Richardson’s character is undergoing a coming-of-age but its sexual nature is not on exhibit as she turns her attention to her platonic relationship with Jin while reserving a potential intimacy with young Gabriel. Architecture is front and center, a product placement for Columbus that might just inspire heading away from the coastal attraction into the interior.

In one sharing of views, Gabriel lectures Casey on attention spans, a topic widely covered especially these days when video games take precedence over normal, much less deeper, conversation. Kogonada appears to be letting us in the audience know that his movie has none of the accoutrements of action-adventure tales, making “Columbus” a dandy movie for a disappearing species of mature audiences.