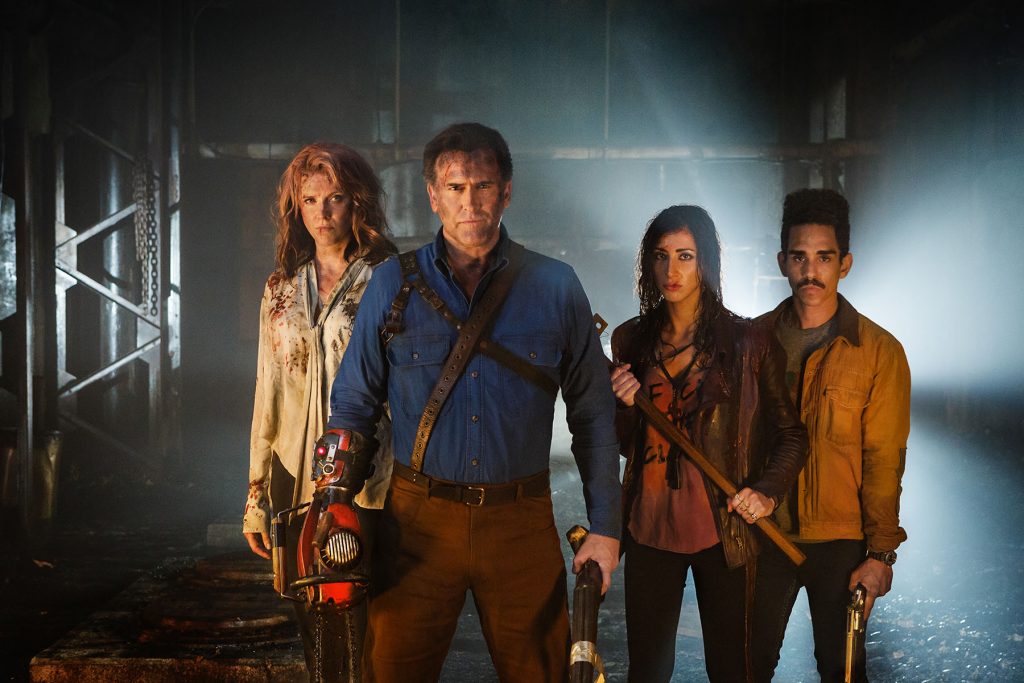 Ash (Bruce Campbell), Pablo (Ray Santiago), Kelly (Dana DeLorenzo), and Ruby (Lucy Lawless) are back together now in Ash’s hometown. He doesn’t receive a warm welcome, as locals know him as “Ashy Slashy” who just happened to kill his friends 30 some odd years ago. Ash’s crotchety dad Brock (Lee Majors) still blames Ash for the death of his daughter Cheryl, but can they learn to mend their relationship when deadites, and a new evil come to wreck the town and steal the Necronomicon?…again?

Special Features (running times indicated):
Audio Commentaries by cast and crew [5 episodes out of 10]
Season 2 First Look [2:10] – short summary and highlights of season 2.
“Inside the World of Ash vs. Evil Dead” Featurettes [total running time 16:50] – All 10 episodes have a cliffs notes summary without giving too much away, with highlights from each episode.
“Up Your Ash” Featurette [ 2:22] – A quick look into the workings of The Morgue [episode 2] when Ash goes into the town coroner’s office in search of the Necronomicon, and gross hilarity ensues.
“Women Who Kick Ash” Featurette [2:08] – Summary of the women in Ash’s life – Ruby, Kelly and Linda B. (Michelle Hurd), whom are not damsels in distress.
“Puppets Are Cute” Featurette [1:09] – Behind the scenes with the Ashy Slashy puppet from Delusion [episode 7].
“Dawn of the Spawn” Featurette [1:22] – Behind the scenes with the Baal Monsters.
“Bringing Henrietta Back” Featurette [1:35] – Behind the scenes with Ted Raimi as Henrietta, and the special effects team explain incorporating old original style practical effects with CG.
“The Delta” Featurette [2:13] – Short history of Sam Raimi’s use of his trademark 1973 Oldsmobile Delta 88.
“How to Kill a Deadite” Featurette [2:18] – Behind the scenes use of special effects and blood spatter techniques.
Fatality Mash-Up [.49sec] – All of the key death scenes from season 2.

The Good:  You don’t have to be a fan of the Evil Dead franchise to like this series, but to catch on to some Easter egg references, it does help. The random callbacks to the original films with Henrietta (Ted Raimi) and Cheryl (Rachel Sandweiss) might go over some heads.  The commentaries are laugh out loud entertaining, especially since Bruce Campbell is a wellspring of information on the most random things that pop up in each episode. All of the characters are likeable and fun; even the deadites. I like how they go old school on the practical effects, to keep with the style of the original Evil Dead films; but that they don’t go overboard with the CG to sweeten the scenes.

The Bad: The special features only add up to 32 minutes, not counting the commentaries. I love the show, so of course I’d recommend for purchase, but, only if you don’t really care about the special features; although I felt they cheaped out maybe a little bit. Another strike against them is that the closed captions are not included in the special features, only the actual episodes.

Ash vs. Evil Dead is not for everyone, but a must for anyone who loves some comedy with their gore.  Season One was awesome, but Season 2 brings it with both barrels. If you watch only one episode, make it #2 The Morgue. Why? A head up a cadaver’s ass, a penis in the eye, and a lamprey colon monster. Groovy!

Acting: B
Story: B
Technical: A
Total Rating: B+
Reviewed by JM Willis