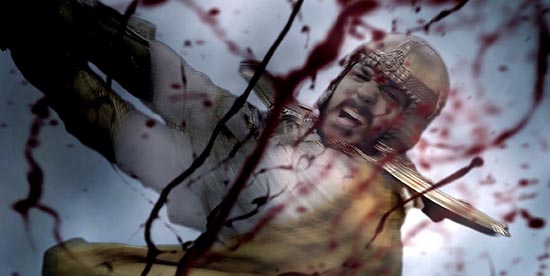 Three adult friends are home on a Friday night, smoking weed and playing video games. One brings home a rare board game called “13 Daemons.” Apparently this game was banned in several countries back in the 70’s because some players were known to die soon after playing.  The object of the game is to free the Realm of Darkhaven from the 13 Demons of the Apocalypse. Once the reach a certain point in the game, they will become “Golden Paladins.”  The guys become consumed with the game, and soon pass out. They fall into a dream state where they are paladins, fighting off faceless demons. When they wake up, the news reports of a grisly death, which mysteriously occurs sometime before they wake up from playing the game. Soon they start to believe that the game is real and they are in fact the golden paladins who need to save the world from demons.

The Good:  If you’re a nerd or geek, or you know one, you will relate hard to this story. I’ve never played D&D, but apparently staying up for hours and days playing is an actual thing. Some of the dialogue was classic nerd interaction. I appreciate that they included that the game pieces were made of pewter “so it’s legit.”

The Bad: The budget for this film was around 1 million, and I’d bet half was spent on weed. A good majority was spent on the knight costumes, and the rest for that board game with the rune symbols written with a dying sharpie. The special effects were old school laser tunnel effect with negative filter.  The sequences took far too long to get the point across that we were watching a “battle” with a demon.  The use of pause for effect only works for intense scenes, otherwise it’s just awkward spots where you wonder if they forgot their lines or to yell cut.  The scenes where we see one of the dorks dressed up in kitchenware trying to fight regular people with a rubber mallet is actually the only part I really enjoyed. The downside was that we don’t see any actual violence, just lots of blood spatter on hands and faces; it’s cheap and looks cheap.

13 Demons feels like a student film, and what I mean is: a last minute throw together project to earn a passing grade. There are some obvious hail marys thrown in to disguise as effort, but they were futile. This film had a decent premise, but they needed a bigger budget to make it palatable.