Some of the ghastliest experiences in life are rooted in nightmares that are both literal and figurative. The acclaimed post-apocalyptic horror film, ‘It Comes at Night,’ is powerfully deceptive in the way it shifts from reality to illusion, and unravels as a living nightmare for all of its characters. Those terrifying fantasies that are plaguing seemingly close families are coming home again, as the drama is being released on home entertainment today. Lionsgate is distributing the movie on Blu-ray (plus Digital HD) and DVD.

In honor of ‘It Comes at Night’s home release, Shockya is offering two lucky winners a Blu-ray of the drama. To enter, email, us at ShockyaGiveaway@aol.com. Let us know that you’re entering the ‘It Comes at Night’ giveaway in the email’ subject line and message. You have until next Tuesday, September 19 and you can enter the contest once daily. After September 19, we’ll pick the winners at random and notify them through email. Good luck!

The thriller’s home release comes after it was distributed in theaters this past June by A24. The horror film’s Blu-ray and DVD releases feature an all-new featurette called ‘Human Nature: Creating It Comes at Night.’ The dram’s Blu-ray and DVD are selling for the suggested retail price of $24.99 and $19.98, respectively.

‘It Comes at Night’ follows 17-year-old Travis (Kelvin Harrison Jr.), who’s secure within a desolate home with his protective and heavily armed parents, Paul and Sarah (Edgerton and Ejogo). But the teen watches as his world abruptly changes when a desperate couple (Abbott and Keough) arrives at the house with their young son. Panic and mistrust grow as the dangers of the outside world creep ever closer. But they may be nothing compared to the dangers within. 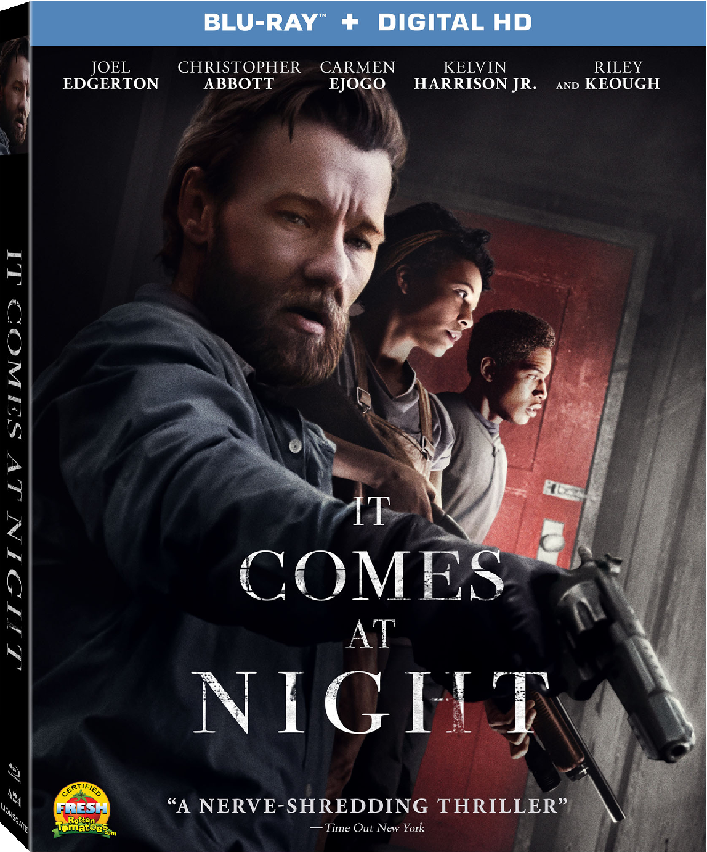