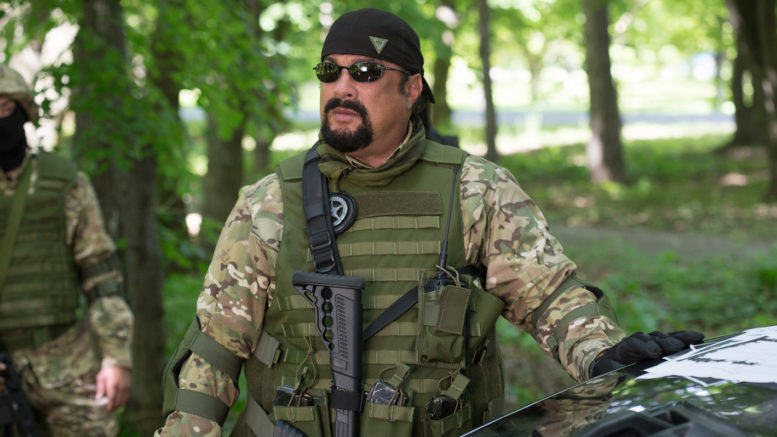 Steven Seagal in the film Cartels.

The Good:  The DVD offers subtitles that are extremely helpful for when Steven Seagal says lines his incoherent Marlon Brando voice. There’s some decent action, but not enough.

The Bad: My suspension of disbelief is put to test during a scene where Steven Seagal is climbing several flights of stairs. I would believe this was done in one take, and he just climbed the last 3 stairs before taking a break. The wardrobe department couldn’t find a pair of sunglasses to fit Georges St-Pierre’s face. Dude is supposed to look cool and menacing, but ends up looking like a dorky European tourist.  The romantic side story is laughably unbelievable.  The CG blood effects were bad.  They didn’t want to waste money on practical squib effects, so it’s as if they just let some animation student from The Art Institute do the job for class credit.

There are no special features to warrant the purchase, even if you are a Segal fan. He’s barely in this film and he still gets top billing.  Cartels is boring. It takes almost 45 minutes to see any action, and then it’s downtime central until the last 25 minutes. My husband kept having to wake me up, because I literally kept drifting off.  The ending is so abrupt and leaves you saying “What the F—… is that it?” There is no ending, there’s no resolution, and quite frankly I didn’t even care.