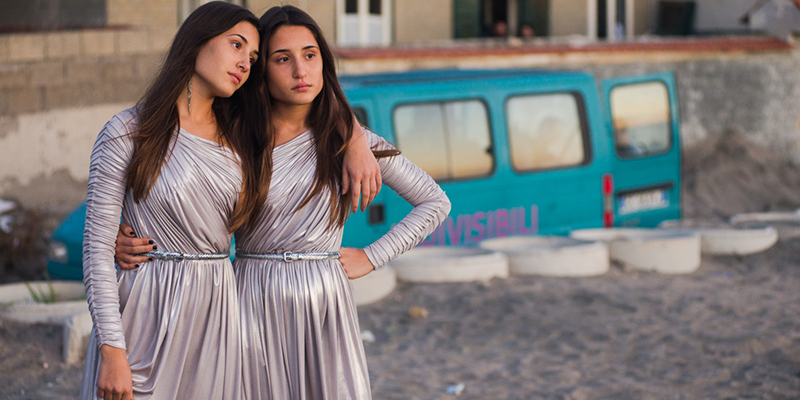 Photo from the film Indivisibili (Indivisible).

“Indivisible,” or “Indivisibili” in the original, might remind cinephiles of Josh Aronson’s film “Sound and Fury,” which has the tag line “If you could make your deaf child hear, would you?” Though to most of us the answer is obvious, one community leader of an anti-implant sect refuses to allow this, saying that being deaf is perfectly normal, and those without hearing should not be coerced into joining the hearing society. Edoardo De Angelis is concerned with a handicap that similarly finds people divided on how to deal with it. The director is known, albeit not far and wide, for his 2011 comedy “Mozzarella Stories”—which includes the story of a pop idol stuck for 3 days under his dead, morbidly obese mistress. Now he helms a serious drama with comic undertones. “Indivisible” is an original, a tale of conjoined twins at the age of eighteen, facing a handicap that could be overcome by surgery but is not.

For the reason, just follow the money. The daddy, Alfonso Fasano (Peppe Servillo) is a long-haired poet who writes soulful songs for his daughter to sing usually at parties organized by rich people. Titti (Antonia Truppo), the mother, is blamed for smoking weed and drinking during the pregnancy, and opposes the way her husband is exploiting the freak-show aspect. Notwithstanding the beautiful voices of Viola (Angela Fontana) and Dasy (Marianna Fontana), who are named after the actual English twins Violet and Daisy Hilton, they would probably not be much of a draw if they were normal. What’s unusual from the start is that Farren Paredes’s lenses capture the poverty of the Neopolitan family, in a downscale section of town with sad hookers, though the twins’ dad is putting away 80,000 euros a year earned by his daughters’ performances. When told by a Swiss doctor that the twins could be separated since they are joined only at the hip and do not share major organs, the father insists that the doc should butt out as does the handler for a tattooed woman singing “Ave Maria” for dancing who wants to become the impresario for the twins.

Though the real-life Fontana sisters are twins, you could easy see physical differences, and if you could not, you could spot their individuality in their customs. Dasy likes to drink wine while Viola has an appetite for sweets. Dasy wants to be with a man, but for Viola, her sister is everything. Dasy wants to go to Geneva for the operation, while Viola wants to remain connected, believing that she will be alone when the only meaningful person is her life is her Dasy. The twins have a desire to go to Los Angeles where they think they can attract the kind of crowd that Janis Joplin relied upon, and they’re familiar enough with the career of Michael Jackson. To get the money they would need, they spend one night on a yacht owned by Marco Ferreri (Gaetano Bruno), a Neopolitan Hugh Hefner, who states that he loves Dasa so much he would cut off his head to be with her.

Songs are from Enzo Avitabile, a folk singer who is presumably more talented than the twins’ dad, and though the twins do not harmonize, their voices lend them a charm that makes one wonder whether they could get those gigs if they were separate individuals.

Conjoined births are rare: some say only one birth in every 189,000 results in this handicap, with half still-born, making the whole project more of a fable than a project rooted in realism. There are some superb casting choices, including, of course, the twins, and also a corrupt priest (Gianfranco Gallo) who attracts support from local Nigerian ex-pats and who advises the sibs to stay as they are—freaks. The finale is an unexpected twist, also in line with the quality of the film as a fable. The location outside Castel Volturno is where Matteo Garrone’s violent mafia pic “Gomorra” was shot, but violence in “Indivisible” is a constant threat which is not acted out in this one.