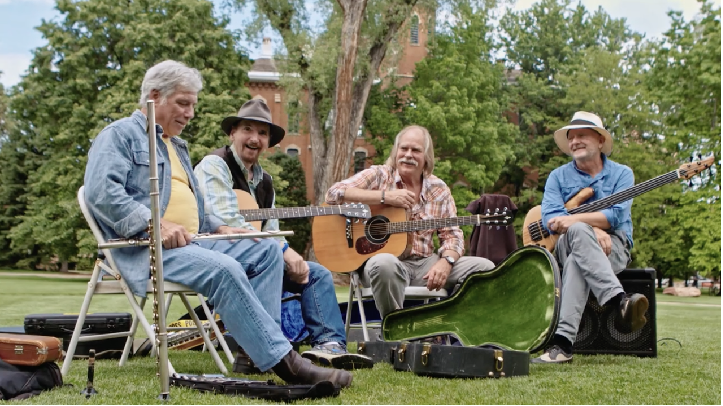 A still of the hippie band, Magic Music, in writer-director-producer Lee Aronsohn’s documentary, ’40 Years in the Making The Magic Music Movie.’

Many people hold a special connection to the music they first heard during their adolescence, as it evokes the feelings and emotions of their carefree youth. The new documentary, ’40 Years in the Making: The Magic Music Movie,’ is reawakening those sentiments for youth culture from the 1970s, as it’s reuniting the title hippie band. In honor of Magic Music performing together again, and being featured in the upcoming film, Shockya is premiering an exclusive clip from the movie. In the clip, the band members describe how they almost became the opening act for Cat Stevens.

’40 Years in the Making: The Magic Music Movie’ is set to have its World Premiere tomorrow at 6:30pm ET at the Bearsville Theater in Woodstock, New York, during the Woodstock Film Festival. The band is also set to play a reunion show at the Napa Valley Film Festival on November 11.

The documentary was written, directed and executive produced by veteran television producer, Lee Aronsohn. The movie follows the filmmaker as he tries to track down the scattered members of Magic Music, which was a hippie band that found popularity and success in Boulder throughout the ’70s. The filmmaker, who was a devoted fan of the city’s most influential and elusive jam band while he was in college, hoped that he could convince the band to play together one last show.

Magic Music ultimately decided to heed to Aronsohn’s request, and reunited for a concert, 40 years after their tumultuous breakup. The band also relived their touring days, and explained how they squandered the opportunity to become the next big jam band.

Shockya is premiering an exclusive clip from director-writer-producer Lee Aronsohn's music documentary, '40 Years in the Making: The Magic Music Movie.'