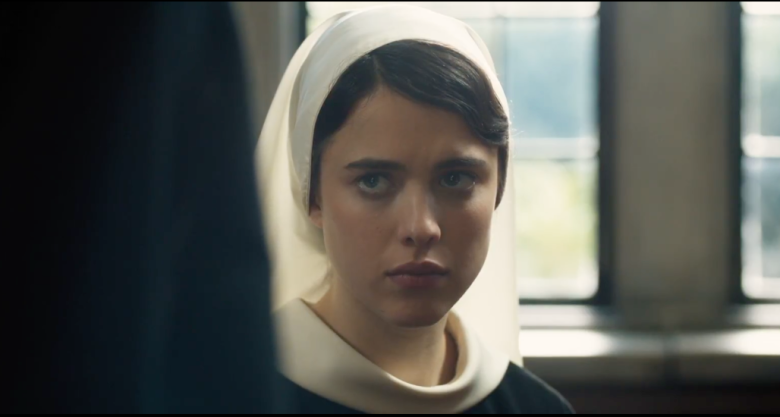 Photo from the film Novitiate.

Despite the presence of movie characters who claim to be lapsed Catholics, Americans are bigger churchgoers and generally move religious than our friends in Western Europe. Polls have shown that our public will vote for a Black person, a woman, perhaps even Satan himself, but forget about the Oval Office if you’re an out-of-closet atheist or agnostic. While some of us will go to houses of worship every week and others only on the most important holidays, there are folks who make careers out of their religious beliefs. Enter Maggie Betts, who directs and wrote “Novitiate” as her first feature film and took off with the Breakthrough Director’s award for this very film. “Novitiate” is a mature, thought-provoking, study of the women in the fifties and sixties who choose to be brides of Christ as postulants in a Tennesseeconvent. This is a strict order run with an iron fist by the Mother Superior, a person of mighty strong beliefs and with emotions that make you wonder whether she would smash a reluctant newcomer in the face for questioning her. What’s more she is enraged that the pope during Vatican 2 reforms, diminished the status of nuns as “equal with the parishioners” at the same time doing away the Latin Mass and the requirement that nuns wear habits. Vatican 2 urges Catholics to be more up front about considering other religions with the same respect they give to Catholicism.

One key player, Sister Cathleen (Margaret Qualley), joins the convent at the age of seventeen, in part because she is looking for a way to get out of the noisy environment of her home. Her mother, Nora Harris (Julianne Nicholson), is agnostic, fighting with Cathleen’s mostly absent dad, Chuck (Chris Zylka). Despite her doubt about God’s existence, Nora wants her daughter (played first as a young girl by Eliza Mason and as a twelve-year-old by Sasha Mason) to get an idea what religion is about by sending her to a Catholic school run by nuns. Nora believes—as others parents should, in my opinion– that it’s absurd to bring up a kid Catholic or Jewish or Muslim or whatever before the child knows what it’s all about, and that a mature seventeen-year-old can legitimately make up her own mind after due consideration.

Cathleen, having felt the presence of God early on, is determined to become a nun setting off her mother’s exasperation, even though the convent is under the rule of the authoritarian Reverend Mother (Melissa Leo). Some postulants are washed out at the orders of the Mother Superior, but most eventually will take their final vows.Much of the tension comes from the sexual feelings of the eighteen-year-olds, feelings that seem sublimated in religious ecstasy. But the desire for human intimacy plays havoc with the ambition of some of the young women, who could probably be characterized by the expression Naturam expellas furca, tamen usque recurret (You can drive nature out with a pitchfork but it will always come back.)

The film toys with the complexity of the society in the convent. While writer-director Betts dishes out criticism, particularly of the Mother Superior—who cannot tolerate the ghost of a dissent from those under her stewardship—Betts credibly cheers the passion of most of those who are new to the order. While the visit of Archbishop McCarthy (Denis O’Hare) makes clear to the Mother Superior that she will be replaced if she continues to ignore the “suggestion” of the Vatican abolishing corporal punishment, we are meant to sympathize with the reactionary head of the convent in finding that nuns are to lose their status as being above the parishioners. These women have dedicated their lives to fulfilling their passion for God only to find that a male, the pope, chooses to downgrade them to mere equality.

There’s a reason that the Sundance Institute awarded the writer-director with Best Breakthrough Director, as her very first feature narrative film, well paced throughout through the efforts of editor Susan E. Morse. Further the film enjoys Kat Westergaard’s somber photography as befits the convent. And there is a superb array of choral music for the soundtrack. She could not have taken the award without the benefits of an exceptional cast, particularly Melissa Leo as the Mother Superior who will probably be nominated by several awards groups for Best Actress.