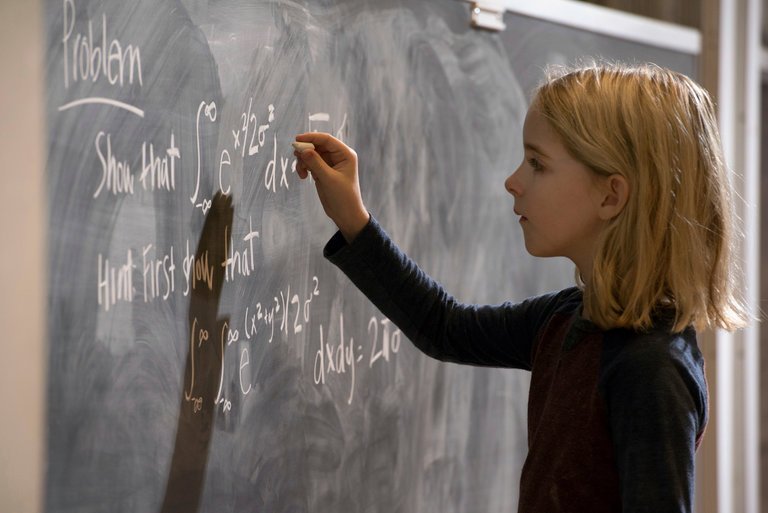 Photo from the film Gifted.

There’s a popular assumption that critics and general audiences for movies usually cannot meet and accept one another’s views. A strong package of evidence lies with crowd-pleasing family comedies and dramas. Critics take the view that 3-hanky movies are cloying and do not deserve mention as terrific stories however well acted. General audiences are quite fine with what might be called Hallmark greeting-cards tales, everything as predictable as an anniversary card that opens with “To my husband,” or “To my wife,” rather than the kinds of cards that I favor with cute puppies on the opening pages. So ordinary people love to say “I laugh, I cried,” while critics discuss cinematography, production values, dialogue. In my snobbish days I would call myself an “elitist,” while now, if a movie moves me and if it has cute grade-school Leave-it-to-Beaver types, why complain? I’d say now that what distinguishes a professional writer from a regular moviegoer is that the writer might praise both types of films: “Lassie Come Home” AND “Wild Strawberries.”

“Gifted” belongs to the category of a Hallmark-style movie that deserves to be seen and is justifiably offered by Fox Searchlight, its distributor, for awards consideration. It’s a charmer filled with the enchantment of an eleven-year-old actress performing in the role of a brilliant seven-year-old mathematics genius.

“Gifted” also brings to the forefront a clearly defined conflict. Think of this: You have a young daughter in first grade who could do college-level work in mathematics but who is bored with the ordinary school she attends and is so above all others academically that she does not make friends. Would you send her to a specialized school for the gifted, or would you keep her in her neighborhood institution? This looks like a no-brainer, but her uncle, Frank Adler (Chris Evans), who assumed custody of Mary (Mckenna Grace), believes that she should be able to fit into the regular world rather than in the bubble of the academic aristocracy. Her existence in the modest Florida home of a boat repairman, formerly a college assistant professor, results from the suicide death of Mary’s mother Diana, a world-class mathematician whose wish was to have Frank bring raise the girl. What’s more Frank’s good friend and next-door neighbor Roberta (Octavia Spencer) loves the girl and agrees that Frank should retain full custody. Fred, the one-eyed cat that lives with Frank and Mary, seems to agree.

Evelyn Adler (Lindsay Duncan), who is Frank’s mother and Mary’s grandmother, has the opposing opinion. She wants Mary to attend an elite school, one considered good even by Frank, and what’s more Evelyn has the money to raise the girl in an elegant lifestyle, with enough money to pay the tuition and to hire tutors if helpful.

The case winds up in family court, mother and son fighting each other for custody, leaving the judge with the authority to decide the girl’s fate, Courtroom drama follows, with Frank defended well by his lawyer, Fred Cullen (Glenn Plummer) and opposed by child welfare authority rep, and we do get to hear the decision of the court, allowing us to take sides as well.

A fantastic performance by young Mckenna Grace (who in real life is eleven, not seven) proves to be the heart-stopping momentum, while a romance between Frank and Mary’s teacher Bonnie Stevenson (Jenny Slate), serves as what could have been the most embarrassing moment, when Mary, who had been staying with Roberta, comes home early and finds her teacher emerging from the bath with just a long terry robe covering her. Mary’s comment, the wittiest line in the film, shows that the girl knows more about life than math.