The horror genre has long been meant to emotionally and physically frighten its audience. But horror films took a powerful turn in proving just how important they are to society with the release of writer-director George A. Romero’s original hit ‘Night of the Living Dead’ trilogy. It’s one of the most truthful movie series that reflects on society and its social conscience, and how humans react during times of conflict.

The celebrated late filmmaker’s legacy is living on with ‘Day of the Dead: Bloodline,’ the latest reimaging of the final entry in the ‘Night of the Living Dead’ trilogy, the 1985 drama, ‘Day of the Dead.’ The new movie is being released tomorrow in select theaters and on VOD and Digital HD by Saban Films. The horror movie was directed by Hèctor Hernández Vicens, and written by Mark Tonderai and Lars Jacobson.

‘Day of the Dead: Bloodline’ follows a medical student, Zoe Parker (Sophie Skelton), who strives to find success helping people. While she easily fits in with her classmates, she determinedly tries to thwart the advances of one of the blood donors at the university, Max (Johnathon Schaech), who she hasn’t developed any romantic feelings for, despite his repeated attempts to win her affection. During her latest advance, the university is suddenly and unexpectedly overrun by a horde of zombies.

The story then jumps five years into the future, and shows how Zoe is now a leading scientist in a underground bunker. What remains of American society in the wake of the zombie apocalypse has been forced to live in gated, guarded communities, while Zoe and her fellow scientists and political leaders still resolutely work to find a cure. When Zoe convinces her boyfriend, Baca (Marcus Vanco), and his brother, Miguel (Jeff Gum), who’s the leader of their community, to allow her and several of their colleagues to drive back to the university and gather more medicine, the group inadvertently leads Max right back to Zoe.

Despite her troubled past with Max, Zoe convinces Baca and the rest of the leaders to allow her to conduct experiments on Max, who’s has become a zombie, but has retained some of his humanity. Zoe hopes that Max’s unique blood will help in her search for a cure, despite the fact that he’s intent on toppling everything she has worked for.

Vicens and Skelton generously took the time recently to talk about directing, and starring in, ‘Day of the Dead: Bloodline’ during individual exclusive phone interviews. Among other things, the director and actress discussed how they were both drawn to take part in the reimagining of Romero’s classic zombie film, as they both appreciate the distinct way he approached showing how the mix of science and politics influences society and the social conscience.

The conversation with Vicens began with him explaining why he was interested in directing ‘Day of the Dead: Bloodline,’ and what attracted him to Tonderai and Jacobson’s screenplay. “I love George A. Romero’s original ‘Day of the Dead’ film. So I was interested in reading the script for this new movie, and saw that this story is different in some ways from the original film. But it’s still set in the bunker during the zombie apocalypse. So I became inspired, and thought I could remake a movie that I really like,” the helmer shared.

“I was interested in working in creating these characters who are mainly in this one location, and really showcase their emotions amongst the violence. So I thought that I could create a suspense in this atmosphere of slasher zombie movies, and agreed to be a part of this film,” Vicens also shared.

While ‘Day of the Dead: Bloodline’ is a reimagining of Romero’s cult classic movie, Vicens emphasized that the two films are completely different projects. The new movie “has different characters, and one of the main differences in the plot is the objective of the main characters. In Romero’s movie, they want to domesticate zombies. But in ‘Bloodline,’ Zoe wants to take the vitals of the zombies, in order to find a vaccine.”

The ‘Day of the Dead: Bloodline’ director further explained that “In Romero’s film, the scientists try to domesticate the main zombie, Bub. But in ‘Bloodline,’ our main zombie, Max, is a special zombie. His body is rotten, and his brain doesn’t work very well, but he still hates zombies. So he’s a deeper character than other zombies.”

The filmmaker then delved into what the casting process was like for the main protagonist in the reimagined horror movie. When it was time to find the right actress to play the role of Zoe, Vicens and the drama’s producers held a large casting call. During that process, they felt that Skelton was the perfect choice to bring the main character to life on the screen.

Skelton began her interview by explaining how she became cast as, and why she was interested in playing, Zoe in the new horror film. “I became involved in the movie in quite an unorthodox way,” she revealed. “I was helping a friend self-tape for another character, so I began reading the script with him, and thought it was great. So he told me to ask my agent how I could become involved in it. So my agent set me up with an audition.”

The actress also divulged that “The character was then actually cast, and was actually supposed to be played by Ariana Grande at one point! But then she had a scheduling conflict, so she didn’t end up starring in the movie. They then started looking at different actresses, and I managed to get an audition at that point. Then a couple of days later, I got the call that I was cast, and then flew out to Bulgaria, where we filmed, later that week.”

Skelton also noted that “In terms of being attracted to the role of Zoe, it’s a really rare opportunity to play such a range of a character. Zoe’s a bit shy in the beginning of the film. But then when we hit five years later, after the apocalypse began, she really grew into herself, and became a really strong woman. So it was really great to be able to play that range in this type of character, and be a part of Romero’s franchise. It was a once-in-a-lifetime opportunity.”

The performer added that she was honored to be a part of the ‘Day of the Dead’ series because she’s a “horror film geek. I do like the adrenaline rush in them,” she admitted with a laugh. “I really enjoy watching them in the cinema, and being in one was really fun. There’s so much going on, in terms of the zombies running around. There was a lot of acting scared on set, because in person, the zombies aren’t actually as scary as they seem on screen,” Skelton revealed.

Once Skelton and the rest of the performers were cast, Vicens had rehearsal time with them, in order to build the characters’ motivations and emotions. “I spoke with the actors a lot about their characters, because I feel that it’s important to recreate the movie before you begin shooting. Not only did we recreate the shoots, but also built their characters. That offers the actors a lot of freedom once we begin shooting,” the helmer explained. He added that “I took a few days with each actor to talk about their characters, including their feelings, background, objectives and relationships with the other characters.”

Not only did Vicens feel that it was important to work with the actors on developing their characters’ emotional arcs, but he also cherished the process of creating the zombies’ looks and physicalities. “One of the most important things was to determine how the zombies would move, and how they would also use their eyes to watch what was going on around them. It was also important to determine the best way to how the zombies would react to sound,” the filmmaker divulged. “Another important element for the movie was to figure out how to create the right make-up and costumes for the zombies. The way the zombies look explains what has happened to them since they were bitten.”

Also speaking of creating her character’s physicality, and performing her own stunts, on the set, Skelton enthusiastically stated with a laugh that that process “was brilliant. I don’t think I’ve ever had so many bruises! I did do all of my own stunts, which was really great. There are some stunts in the beginning of the film, but that’s when Zoe’s not as much of a fighter as she later becomes. So I did training for the stunts, and that included knowing when to pull back, depending on the character’s arc. That was a really fun and interesting process.”

The actress also expressed her appreciation of being able to form strong working relationships with her co-stars on the set of ‘Day of the Dead: Bloodline.’ “We all got along really well. We spent a lot of time together, because we’re in a lot of the scenes together. That helped us bond together as a family, which helped us really talk about the characters and scenes. That helped create a great atmosphere on the set.”

With the horror film was shot on location in Bulgaria, Skelton embraced the experience of being able to work in another country. “But we unfortunately didn’t get to do much sightseeing in Bulgaria, because we were shooting six days a week for five weeks. But we did have a lot of location shooting on ‘Day of the Dead: Bloodline.’ So we were driving out in the mountains, which was wonderful, because we were able to see some of the countryside,” the performer noted with a laugh. “I’ve never been to Bulgaria, and it was beautiful. We shot there over the summer, and the weather was lovely.”

With ‘Day of the Dead: Bloodline’ being released in theaters, as well as on VOD and Digital HD, tomorrow, the actress stated that she thinks the day-and-date release is beneficial for an independent film like this one. “I think with a film like ‘Day of the Dead,’ releasing it on Video On Demand is really beneficial, because people already know the franchise. So people are really eager to see it, no matter what platform they choose to watch it on,” she shared. “There’s something about watching horror in your own house that makes it so much creepier!” 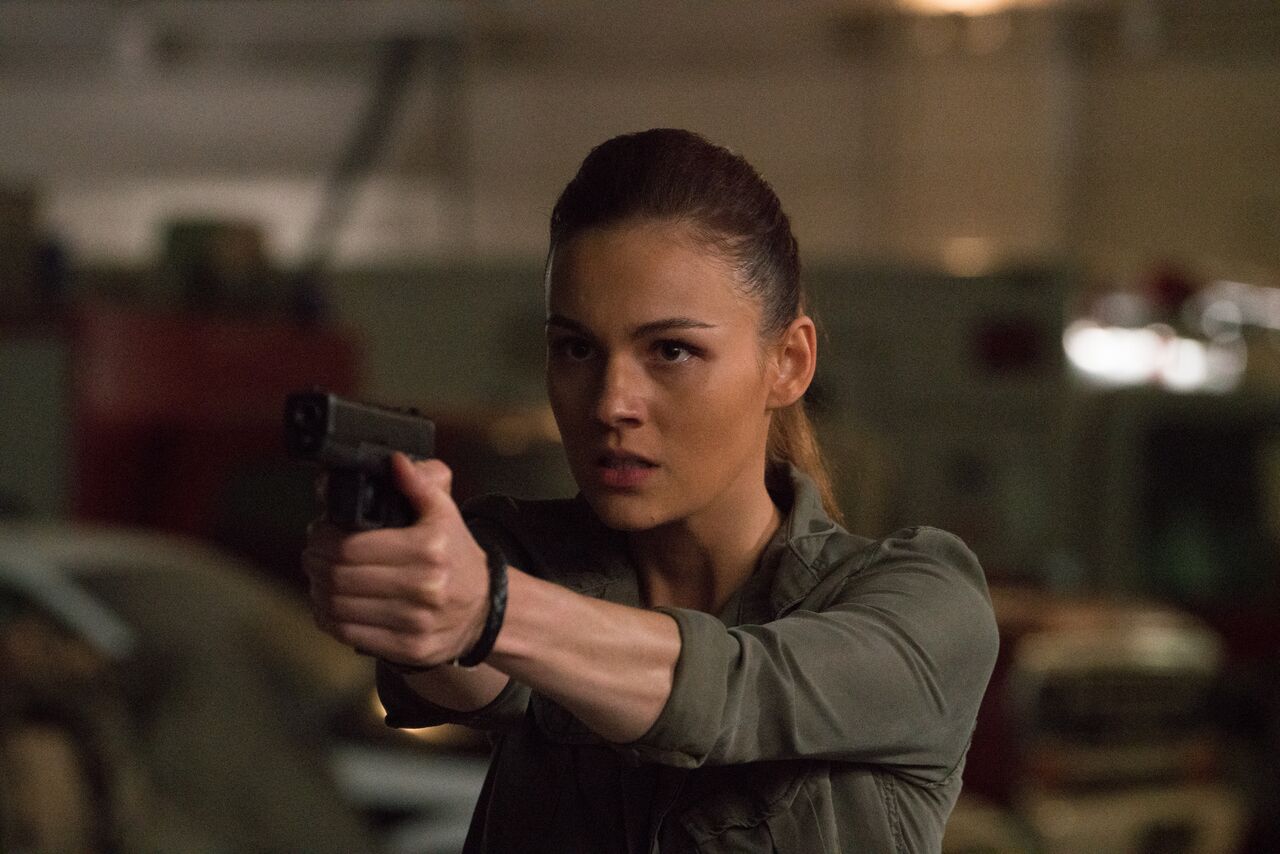