Three masked psychopaths have been lured out of the cover of darkness, and are once again preying upon an innocent family in a secluded home. The unprovoked attack by the strangers is forcing the family to fight for their survival in the newly released official trailer for the highly anticipated horror sequel, ‘The Strangers: Prey at Night.’ The trailer, whose unveiling comes after last month’s debut of the film’s teaser trailer, was released to help promote the drama’s distribution in theaters on March 9 by Aviron Pictures.

‘The Strangers: Prey at Night’ stars Christina Hendricks, Martin Henderson, Bailee Madison and Lewis Pullman. The movie was directed by ’47 Meters Down’ helmer, Johannes Roberts, and written by Bryan Bertino and Ben Ketai. The film acts as a following to the hit 2008 horror movie, ‘The Strangers,’ which was written and directed by Bertino.

Aviron Pictures has released the following synopsis for ‘The Strangers: Prey at Night’:

A family’s road trip takes a dangerous turn when they arrive at a secluded mobile home park to stay with some relatives and find it mysteriously deserted. Under the cover of darkness, three masked psychopaths pay them a visit to test the family;s every limit as they struggle to survive. 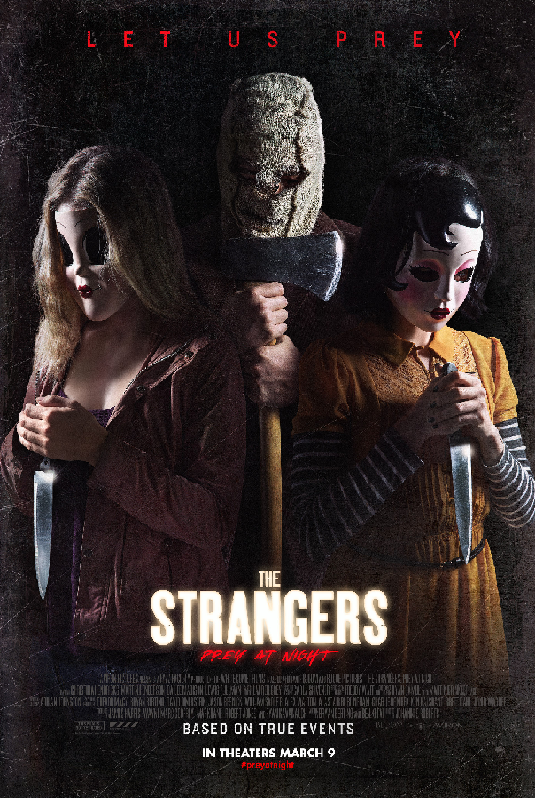