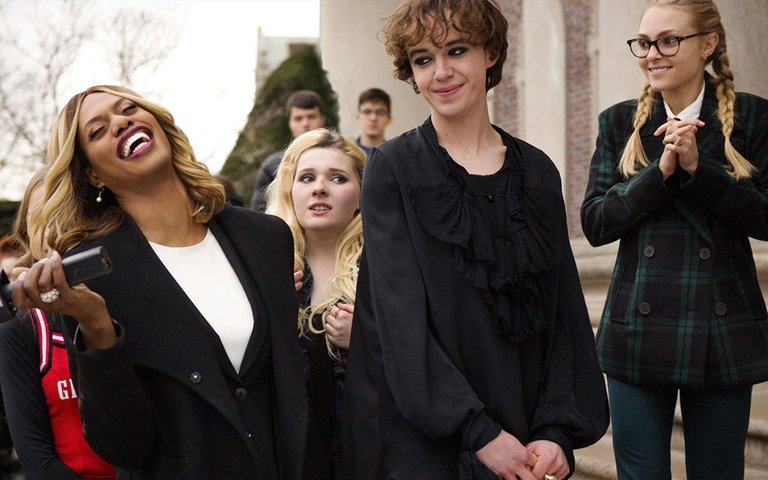 Trudie Styler’s directorial feature debut, ‘Freak Show,’ is not about P. T. Barnum’s ostentation of humans with unusual physical features. This is a contemporary coming-of-age tale that utilizes gender identity as a trigger to encourage both youngsters and adults to embrace the “freak” within them.

The screenplay written by Patrick J. Clifton and Beth Rigazio, adapts the novel by James St. James, with jest, charm and poignancy.  Billy Bloom  (Alex Lawther) is no ordinary adolescent. As he says: “I didn’t choose to be fabulous. Fabulous chose me.”

When his mother (Bette Midler) is forced to send him to live with his straight-laced father (Larry Pine), Billy will have to confront intimidating classmates, but will also find allies, such as his friends Flip (Ian Nelson) and Blah Blah Blah (AnnaSophia Robb). His glamorous flamboyant outfits and razor-sharp remarks, make him a misfit within the ultra-conservative school he attends. Billy who declares himself to be “pro-glamour and anti-khaki,” would definitely feel more comfortable with “a ticket to Mars…or Milan,” than in the homophobic Southern suburbia where he lives. However, his sharp wit brings out the gender obliviator in him, who battles his bullies with sophisticated travestitism and bon mots. The fearless diva will find a way to express his limitless avant-garde verve: present his candidacy for Homecoming Queen.

‘Freak Show’ tackles important and timeless issues with suavity and profundity – from bullying, to the value of friendship, as well as the importance of inclusion, acceptance and tolerance. Everything is sprinkled with sequins glitter, glamour and the love for pageantry, through extraordinary costumes, hair designs and make-up art.

Trudie Styler, directs her formidable cast with delicate impetus and playful gravity. Her profoundly entertaining film is not exempt from contemporary political and social critiques, making fun of discriminatory remarks that seem to echo the current Trump administration – as one of the mean girls proclaims “Let’s Make America Great Again.” Furthermore there are amusing moments that portray the strategies behind election campaigns and maneuvers to persuade voters into endorsing one candidate as opposed to another.

As the art of motion pictures imitates real life, what we bring back home with this delightful ‘Freak Show’ is that in the end, whether we win of lose, what matters is to prove yourself worthy.