The most commanding stories that easily capture audiences’ attention are not only those that are contemporary and focus on important issues, but also transcend barriers of family, religion, gender and culture. The new comedy, ‘Holy Air,’ does that naturally and intelligently, as it explores how conservative societal expectations on such important issues can powerfully influence even the most liberal thinkers.

The contemplative nature of ‘Holy Air’ was influenced by the life of its writer, director and lead actor, Shady Srour, who also served as a producer with Ilan Moskovitch. Their collaboration, which had its World Premiere at last April’s Tribeca Film Festival and was then released in select theaters last November, was distributed this week on Digital and VOD.

‘Holy Air’ follows Adam (Srour) is a Christian Arab living in Nazareth, and is a member of a vanishing minority within a minority in the Holy Land and the Middle East. His wife, Lamia (Laëtitia Eïdo), is a strong, beautiful and progressive Arab woman, who runs a foundation for women’s rights. When Adam hears that Lamia is pregnant and his father falls very ill, he evaluates his life and realizes that he has not achieved much.

Despite all his business ideas failing so far, Adam gives one last try to make it big. He figures that the best way to make money quickly is to sell the very air that Virgin Mary breathed during her annunciation in the Holy Land.

But one priest tells Adam during confession that in order to succeed in his new business venture, and bring such a product into the market, he needs to find allies from the three cultures that are ruling over Nazareth – the Jewish politicians, the Muslim mafia boss and the Catholic church officials. In a politically unstable world where religion is just another merchandise, Adam must determine if the Holy Air can be his salvation, or if it’s just an illusion.

Srour and Moscovitch generously took the time to talk about writing, directing, starring in and producing ‘Holy Air’ during an exclusive interview over the phone. Among other things, the filmmakers discussed how Srour was motivated to pen the script after struggling to find a way to survive in his native Israel after he and his wife had two children, so he was driven, like his character, to start selling the title holy air. Moscovitch also noted how he was drawn to work with the writer-director-actor because he likes telling personal stories in films, and admires that his fellow producer speaks about serious issues in comedic ways.

ShockYa (SY): Shady, you co-wrote the script for the comedy, ‘Holy Air.’ What inspired you to pen the screenplay for the movie? What was the scribing process like for the film?

Shady Srour (SS): About 12 years ago, I was one year into my marriage. I came back to Nazereth from the U.S., where I spent about three-and-a-half years, as I was working on my Master of Fine Art. I then got married, but didn’t have a job, and my wife told me that she was pregnant. I was really shocked, and not yet ready to be a father, especially in that area of the world, of Nazareth, as well as the rest of Israel, and Palestine.

So we had discussions, and came to a mutual decision for her to have an abortion. It’s a conservative society here, so we didn’t speak about it with our families. We kept our decision a secret for a week. During that week, we had a roller coaster of emotions. At the end of the week, we decided that we should actually keep the baby.

So I wanted to make a mockumentary film about us bringing children into Nazareth, and how we dealt with it. But unfortunately, I couldn’t bring in money, a camera or a crew to work with me to make the mockumentary.

So after my wife delivered our first baby, I decided to write a fictional script about fatherhood. I then started to submit the script to different places. But since I wasn’t getting any money for it at first, I kept rewriting the story.

By that time, my second baby was born, and I had two daughters. So I started to feel as though the script was getting further away from me. Like other people with children in Nazareth, I needed to find a way to survive, so I decided to start selling air. So I used that as a symbol, and updated the script, so that it would be about a guy who was selling air to survive.

SY: Shady, besides writing ‘Holy Air,’ you also served as a producer, and Ilan, you served as the lined producer. What was the experience of producing the film together like?

Ilan Moscovitch (IM): I met Shady about (nine) years ago, in 2009. His background is mainly as an actor. I went to festival in Northern Israel, and when I went to see a play, he was on the stage. I liked him a lot, so afterward we spoke, and I told him that I enjoyed his work, and that maybe we could work together. I thought we could work together with him as an actor. I didn’t know he was also a writer and director.

Shady then asked me if I had time for him to tell me a story, and I said, ‘Of course.’ He then told me the story, and I liked it a lot. I felt that it was very personal, and he knows it very well. He knows the characters and locations, because we shot the movie in Nazareth, where he was born and raised.

I also like that Shady has his own political views, but really isn’t into politics; he’s more of a social person, like me. That was something I wanted to incorporate into the story.

I like when directors tell personal stories in cinema. I also like that this movie is subtle and not in your face. He speaks about serious issues, but in a comedic way. I also like that the story is very local, but I also think that a lot of people will be interested in this movie. The story, which is about minorities, is still universal.

SS: As an Arab Palestinian minority in Israel, this was a very delicate and sensitive situation. So when you work with Israelis, people look at you in a certain way, and it’s not easy. So we needed real partners to survive. Ilan came in as a friend and producer who supported me. He protected my vision, and helped me make it as pure as I wanted it.

As an Arab minority, I fight for my rights, and one of them was to get back money to make my film, which I paid in my taxes. When I didn’t get the percentage that I should get, Ilan came in and helped fight for my rights. It was a really complicated situation, but I love making movies.

SY: ‘Holy Air’ also stars a diverse supporting cast that includes Laetitia Eido. What was the casting process like for the supporting actors?

IM: There are some really great Arab actresses in Israel, but the society is a bit conservative. So they started to ask questions about the story. But Laëtitia Eïdo’s open-minded and very modern

Laëtitia loved the script when I spoke to her. But she told me, “I don’t speak Arabic, but I love the script and Lamia, and I want to make the film.” Her mother’s from Lebanon, and her father’s French, so we thought that she did speak Arabic. Shady’s so great, because he spent four months teaching her all of the text. So I think we succeeded with Laëtitia.

For the role of the priest, we tried to find a very good Italian actor, and we did in Usmi Masri.

SS: My inspiration for this role of the priest was Roberto Benigni. We were trying to get him for years, and sent him personal messages. But we unfortunately couldn’t get him. We then found another actor, but two weeks before we were supposed to start shooting, he said he couldn’t be in the film, because he was nervous. So then we cast Usmi, and he did a really great job.

IM: We also brought the extras who played the pilgrims in from different places, like Russia and Nigeria. We brought them in, because there aren’t any Nigerians in Nazareth.

SY: The movie was shot in Israel. What was the experience of filming the comedy in various locations around the country?

SS: The majority of the movie was shot in Nazareth. You don’t always see it, but many of the spots where we filmed are important and famous Biblical locations, such as the Catholic Annunciation Church. I intended to do that, because the locations are beautiful, but the film’s story is more universal.

I didn’t want the locations to be shown like how they are on the news. When you watch the news, everything about Israel and Palestine is focused more on the checkpoints and soldiers. I wanted to put all of that aside, and bring a different image to the foreground. It was important to me to show how not everything about Arabs is connected to terrorism, and how this Arab couple is human and relatable. 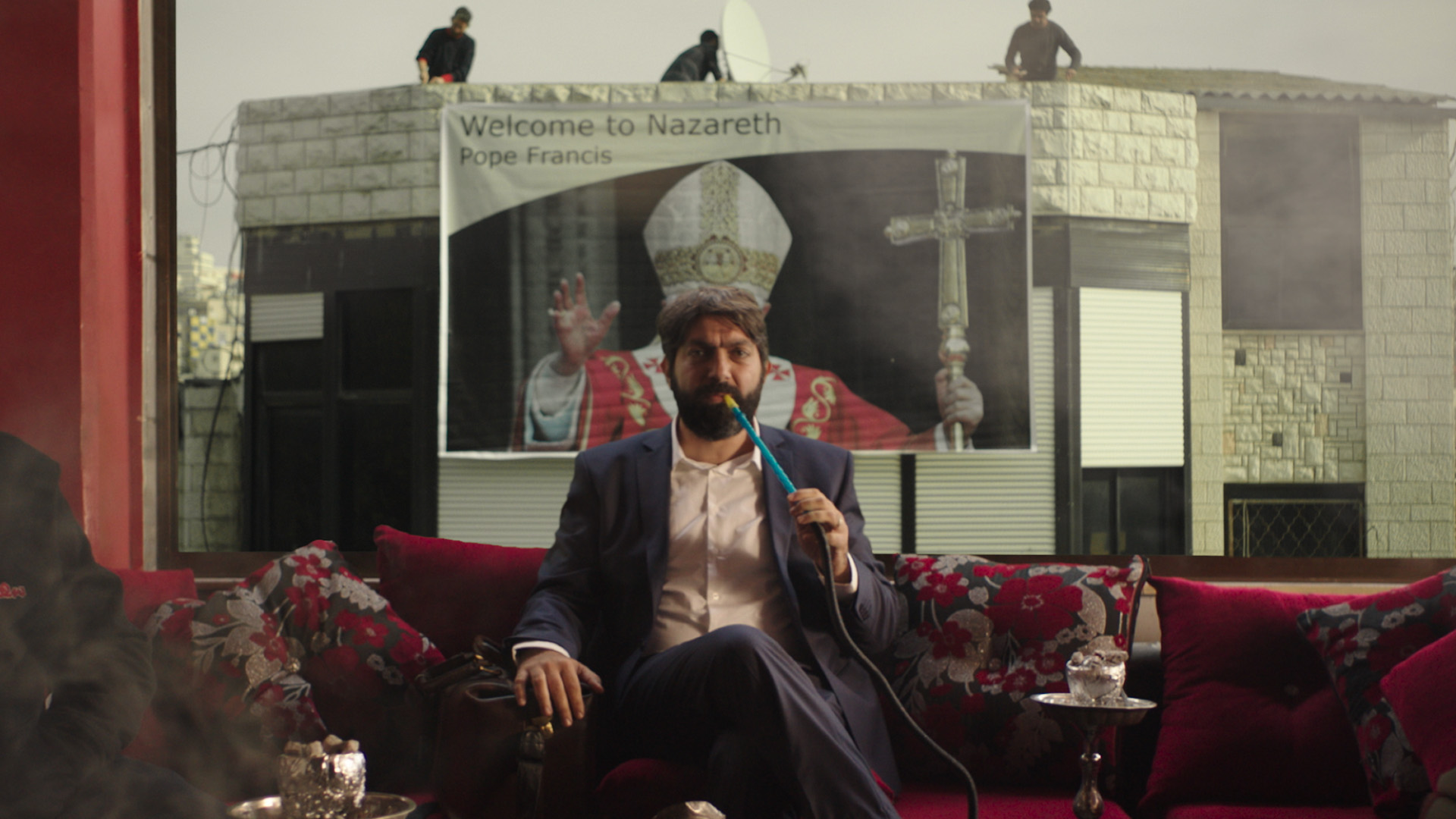