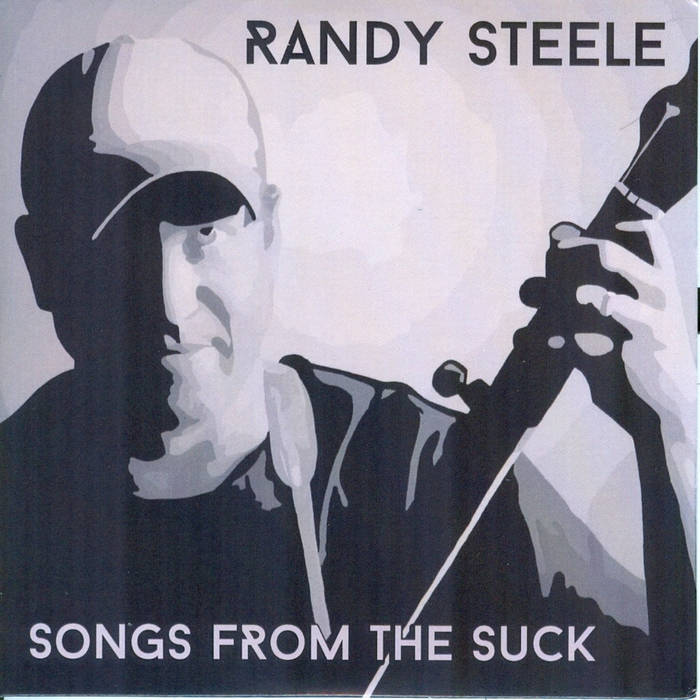 The cover for Randy Steele’s Americana-blues-country-folk album, ‘Songs From The Suck.’

Album: ‘Songs From The Suck’

Powerfully capturing the struggles of contending with the impact of some of life’s most gripping lessons, including heartbreak and addiction, in eclectic artistry isn’t always a natural ability in musicians. But Chattanooga, Tennessee-based singer, Randy Steele, is proving his dynamic growth as a songwriter with his Americana-country solo album, ‘Songs from the Suck.’ The 12-track record, which is now available for purchase on such outlets as the musician’s Bandcamp page, proves that his experiences with the award-winning band, Slim Pickins Bluegrass, wasn’t just a fluke. He knows how to combine his bluegrass roots with his ever-deepening ability to reflect on his experiences, in order to be a sentimental storyteller.

Steele’s latest album, whose name references Suck Creek, which flows into the Tennessee River that’s close to his house, offers a new spin on the traditional bluegrass genre, as he regularly uses drums and slide guitars to emphasize his emotions. That eclectic and unexpected, yet alluring and welcomed, mix of instruments is immediately highlighted on ‘Songs from the Suck’s first entry, ‘Northbound 29.’ Also driven by the enthralling notes of the banjo and fiddle, the song pays tribute to classic bluegrass music, while creating the singer’s own authentic country vibe. He admits that he’s a simple man who’s now ready to fully explore life, as his dreams are heavily weighing on his heart.

‘Northbound 29’ transitions into the country-inspired track, ‘Angels with Halos,’ which once again highlights Steele’s ability to include such diverse instruments as the fiddle, steel guitar and snare drum into a distinct backing for his vocals. The slower-paced tune delves into the musician reflecting on the time he met and spent with the woman he loved, and how their time together changed them.

The next installment on ‘Songs from the Suck’ is the intriguingly named tune, ‘Shove the Pig’s Foot a Little Closer to the Fire.’ The bluegrass-inspired entry is comprised entirely of instrumentation, which offers a calming and tranquil interlude between Steele’s emotionally-charged vocal-led songs.

The singer-songwriter then returns to his country roots with the slow-paced entry, ‘Mobile Soon.’ Led by a stunning guitar and fiddle combination, the timeless message acts as a sentimental ode to a simple way of life. Steele croons about how he’s striving to improve his life, and wonders what could have happened if he had made different choices.

‘Mobile Soon’ transitions into the classic country-inspired song, ‘Eliza Mae,’ on which Steele declares his love for the title woman. He asks her to come home, as he feels like she’s been gone for too long, and he’s willing to overcome their differences. Set against up-tempo strings, the song has the emotional vibe to truly resonate with audiences during a live performance.

The next installment on ‘Songs from the Suck’ is the stunning slow-tempo country and bluegrass-driven entry, ‘Hard Givin,’ on which the musician once again vulnerably admits that he’s struggling to overcome obstacles. That theme of overcoming struggles is also presented in the record’s next song, ‘Drinking to Do.’ Backed by some rock-influenced instrumentation, Steel emotionally notes how some people thrive on good influences, while others only prosper when they’re in pain. The singer shows his vulnerabilities as he croons that he occasionally resorts to drinking to contend with his anguish.

‘Visitation Day’ is the next track on Steel’s album, during which he reflects on his life. Driven by strong guitar riffs, the musician explores the difficulties prisoners face when they’re separated from their families and the people they love. He croons that he can still picture the woman he loves as she was in their memories, and is in despair that she hasn’t visited him recently. As he reflects on their lives together, he expresses regret over what he’s done, and wishes he could go home to be with her again.

‘Songs from the Suck’ then transitions into the bluegrass-inspired tunes, ‘1983’ and ‘One Man Stringer,’ which are alluringly driven by their up-beat banjo and fiddle. Steele’s record then captivatingly delves into the slower, more soulful entry, ‘Hideaway.’ The song grippingly emphasizes how sometimes in life, there aren’t any place to hide, so everyone must face the actions they’ve taken, and reflect on the decisions they’ve made.

The last track on ‘Songs from the Suck’ is the endearing ‘…To the New Perspective,’ which is one of the best entries on the album. While only clocking in at a minute-and-a-half, the song is memorable for featuring an equally simple and powerful banjo and vocal arrangement. The ending tune incorporates a retro feel to the all-too-familiar theme of people always contemplating their life experiences.

Intensely capturing the struggles of contending with the impact of some of life’s most gripping lessons through eclectic artistry is one of the most natural abilities that Steele possesses as a musician. The Tennessee-based musician is proving his dynamic growth as a singer-songwriter with ‘Songs from the Suck.’ The record isn’t just a fluke for the singer-songwriter; he knows how to combine his bluegrass roots with his natural ability to reflect on his experiences, in order to become a passionate storyteller in his music.