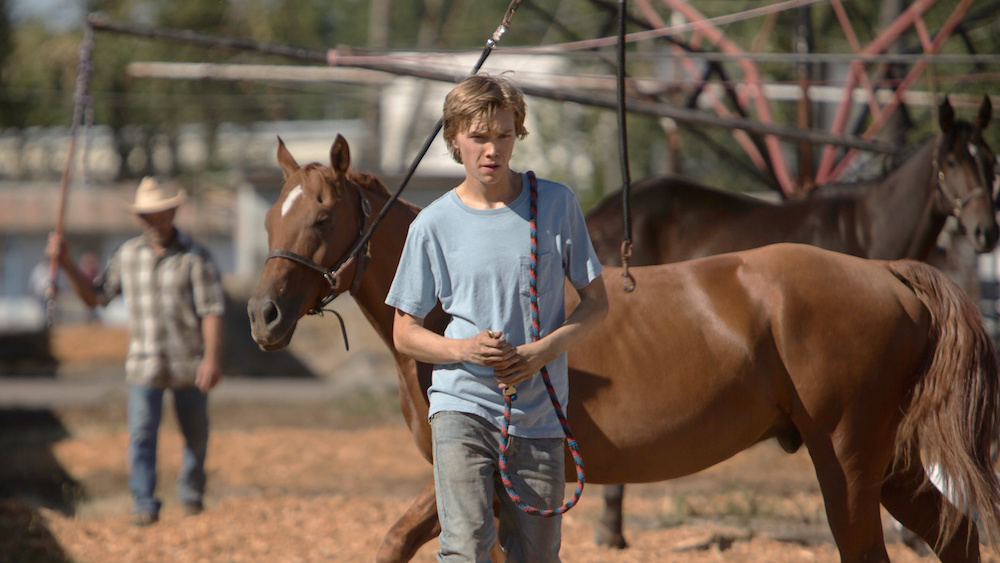 Photo from the film Lean on Pete.

There’s not a single reference to politics in “Lean on Pete,” but people in the audience who are tuned into the latest developments probably can’t help thinking: “This is Trump country.” The folks on display are different segments of what might be considered on a low socioeconomic level, but there’s a big difference between those who do heavy work however unintellectual, and those who are at the bottom of the heap with no jobs. You can guess that the ones doing heavy lifting have little use for those below them, and you can imagine that none of them might want to vote for a President who was originally a law school professor and who always thought before he spoke. Nor would they have any use for books, high-end magazines, or Sunday morning shows like “Face the Nation.” The land considered here at in the Northwest, ranging from Spokane, Washington through Portland, Oregon, and on through the long trek to Laramie, Wyoming.

Andrew Haigh, who directs and who adapted Willy Vlautin’s novel, recalls the director’s “Weekend,” about how a pickup between two guys in a bar leads to what they expect to be a one-night stand but turns into a gay love story involving drunkenness and story-telling and a real relationship. Haigh moves outside the conventional world again in this film, putting Charlie Plummer in the major role—a 15-year-old forced to fend for himself that encounters a number of adventures of the sort that most young people can barely imagine. Plummer, in the role of a teen who is potential heir to J. Paul Getty’s fortune but whose luck runs out when he is kidnapped now plays yet another kid not favored by Lady Luck who has enough spirit to survive in the mean and macho world of today’s modern West.

Not only is the story absorbing; but Plummer turns in a star turn that, if memories remain near the end of this year, could lift him into the stratosphere of awards from critics’ groups right through to the Academy Awards.

Charley Thompson (Charlie Plummer) wants what every normal teen needs: a loving set of parents, food on the table, a school that might allow him to be a star on the football team. But when his no-longer married dad Ray Thompson (Travis Fimmel) moves from Spokane to Portland and must spend most of his time in a warehouse job, Charlie is left mostly on his own in a ramshackle house, though given affection by his father who acts more like a big brother. When his often drunk and regularly roving father is shot by the husband of his latest woman (Amy Seimetz), Charley seems to know what might be in store for him: a trip to a dreaded foster home where abuses are not uncommon. His only remaining family is his aunt Margy (Allison Elliott) who is estranged from her brother and whose address somewhere in Wyoming is unknown to Charley.

Without proper schooling, Charley takes on a job of tending horses under the guidance of the earthy owner Del (Steve Buscemi), cleaning the manure and walking one horse, Lean on Pete, in circles to prepare him for the races at what must be a third-tier racetrack. “Blink and you’ll miss the race,” cautions Del, and we in the audience are surprised to see that each race lasts no more than ten seconds. The five-year-old Lean on Pete—the title possibly chosen because Charley learns to lean on the horse for affection—is no longer able to win races. His jockey, Bonnie (Chloë Sevigny), warns Charley not to treat the horse as a pet, not to bond, which in this circumstance might be wise counsel, Charley is stunned to learn that Pete is to be sold to a dealer involved in Mexican slaughterhouses where killing is legal. Charley runs off with the horse, expecting to trek on foot perhaps a thousand miles, and from there “Lean on Pete” becomes a road (meaning long stretches of open land ) and buddy movie. As such, director Haigh plans Charley’s moves in the tradition of that genre, setting up meetings between the teen and some rough trailer people like Silver (Steve Zahn in his typical, crazy role).

What’s especially interesting is that during these adventures Charley runs into some people who are kind (his aunt, a waitress, a woman living with her abusive grandfather); some are mean, like the killer of his father who smashed the door of his Portland home and murdered the man; and especially nuanced, like Steve Buscemi’s Del who sense that he needs to act in loco parentis but at the same time exploits the kid’s labors. Even Steve Zahn’s Silver, who chats up the lad in a soup kitchen and invites him to share his trailer turns abusive in a fight over the money that Charley had just earned.

Again, Charlie Plummer is the guy to watch, morphing from a shy boy who precedes requests for food and lodging with a “Can I ask you a question?” but who, from necessity turns into a justifiably enraged beast when exploitation and meanness cross the line.