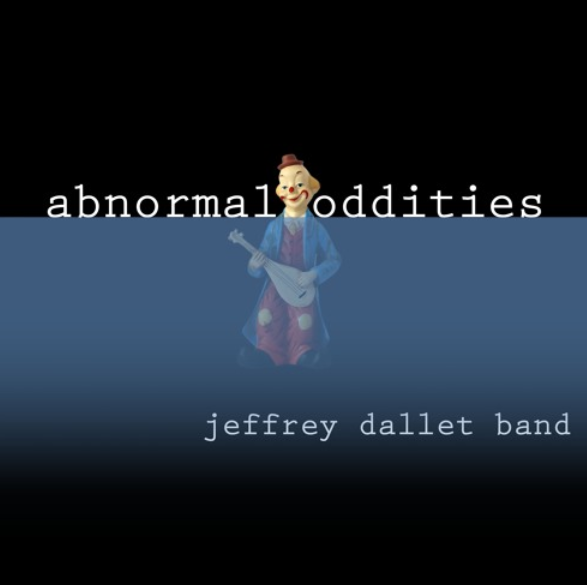 The most creative, but unknown, singers can often the subject of a certain amount of rejection, and have to contend with that isolated feeling of not fitting in in a world that ultimately praises genius artistry in more established musicians. Denver-based singer-songwriter, Jeffrey Dallet, powerfully embraces that sense of artistic insecurity with his group, the Jeffrey Dallet Band, on their new eight-track debut full-length album, ‘Abnormal Oddities.’ The edgy, incisive storytelling that’s included on the record creates stark images of personal passion and the creeping decay of the American dream. The musician’s unique mix of high octane rock and lyrically driven folk music proves that he revels in his role as an outsider looking in.

Dallet proves that he’s committed to his craft, as well as showing that everyone has a place in society, with the exciting first entry on ‘Abnormal Oddities,’ which is titled ‘Blind Love In Vain.’ The musician’s commanding voice on the ramshackle blues-inspired song is backed by a glowing organ and an Americana and rock-n-roll-inspired harmonica and acoustic guitar and drums. The witty and rebellious tone of the folk-rock track, which support the singer’s mature vocals, highlight how the woman he loves is always on his mind.

The sophomore tune on ‘Abnormal Oddities’ is ‘Someday,’ which is one of the best efforts on the Jeffrey Dallet Band’s initial album. Featuring a softer instrumentation and vocal range than its predecessor, the romantic ballad features the musician singing about the American Dream. The gentle and poetic folk entry also feature an acoustic guitar and strings that serve as a backdrop to Dallet’s lyrics that chronicle that he’s longing to be more of a man than what he currently is, as he longs to romantically connect with the woman he’s interested in. The passionate love song would be the perfect score for a passionate scene in a romantic film that chronicles the tale of unrequited love.

‘Someday’ than transitions into the record’s more politically-driven third track, ‘Bye Bye Middle Class Blues.’ Dallet highlights his passion for the music from the 1960s, as he ardently sings about the shrinking of one of the financial classes in the United States; he notes that the rich are getting even richer, while the size of the Lower class is increasing. The guitar and harmonica-driven rock-n-roll tune powerfully questions the way society is handled.

The next entry on the Jeffrey Dallet Band’s debut album is the intriguing and notable ‘Dead And Lonely.’ The song contains lyrics that have a rather somber feel, which are set against a more upbeat instrumentation. On the folk-rock track, which features a soulful organ and Americana vocals, Dallet asks his friends to save a place in their hearts for him, and think of him when they have the time. The tune’s sentimental and relatable message of wanting to be remembered would help make it a commercial radio hit on country and folk stations.

‘Gypsy Jewel’ is the next entry on ‘Abnormal Oddities,’ and begins with a strong folk, soulful and country influence. Backed by a harmonica and guitar, Dallet emotionally sings about the title gypsy girl casts a spell on him, as she shared her soul with him. While she’s the woman of his dreams, they’ll always be separated.

While Dallet sings about longing to be with the woman he loves, the musician further croons about sentimental feelings on the album’s next track, ‘My Old Record Store,’ which takes one of the most modern musical approaches of any of the entries on the release. The fun, upbeat indie-rock tune also features an intriguing country-twang and electronica beat in the rock vocals, as well as the guitar riffs and drum beats. Dallet notes that he embraces being able to enjoy music on vinyl, as well as the bond of music fans spending time together in the title space. The fun vibe will surely help make it an adult contemporary hit on modern Top 40 radio stations.

The penultimate entry on ‘Abnormal Oddities’ is ‘Dear Dayton, OH,’ which features a strong folk-rock instrumentation that support lyrics about a town that has slowly deteriorated. Dallet draws from his folk influences to highlight commentary about modern-day societal problems. Backed by an enthralling harmonica and upbeat drums and guitar, the musician sings about small towns across America being in decay, but he support bringing life back to those towns.

The last song on The Jeffrey Dallet Band’s debut album is the folk-inspired ‘Odd Ball Blues,’ which features an eclectic mix of the drums and acoustic guitar, which remain true to the record’s overall vibe. But the final track is also notably distinct, as it features electric guitars and harder bass, as well. As the hardest rock tune of the record, it leaves a lasting impression on listeners. The lyrics tell the story of the everyday person who seems rather out of place in a smaller crowd, until the group becomes so large that people no longer notice his or her differences. The gritty and unique vocals and instrumentals perfectly highlight Dallet’s versatility as a musician.

The most creative, but unknown, singers can often the subject of a certain amount of rejection, and have to contend with that lonely feeling of not fitting in in a world that ultimately praises genius artistry in more established musicians. Dallet, powerfully embraces that sense of artistic insecurity with his band on their new debut full-length record. The edgy, incisive storytelling that’s included on ‘Abnormal Oddities’ creates stark images of personal passion and the creeping decay of the American dream. The musician’s unique mix of high octane rock and lyrically driven folk music proves that he revels in his role as an outsider looking in.