Seeking comfort in the equally familiar and anonymous setting of the city where they live, no matter how much conflict and unease they’re facing in life, is a powerful relief for many people. Such is the case for the gripping female protagonist in the new musical drama, ‘Blue Night,’ which focuses on a woman with a seemingly perfect career and family who’s secretly in distress. She’s forced to not only deal with her own mortality, but also the flow of regrets and hopes that come with a life-changing revelation. The result is an intimate portrait of a woman at a life-altering crossroads.

‘Blue Night’ marks the feature film directorial debut of Fabien Constant, who brought an unique perspective to the making of the movie with his background in fashion documentaries and commercials. The filmmaker, along with its producers, including Italian filmmakers Lady Monika Bacardi and Andrea Iervolino, felt it was important for the drama to be made, in order to highlight the movie industry’s recent focus on women’s stories being brought to the screen.

The filmmaking group’s conscious effort to include women at all levels of the production, both in front of and behind the camera in many departments, perfectly coincides with a recurring theme at this spring’s Tribeca Film Festival. The movie, which had its World Premiere in the Spotlight Narrative Section at the New York-based festival, highlights how women filmmakers can best provide an intimate portrait of a female protagonist at a turning point in her professional and persona lives.

‘Blue Night’ follows Vivienne Carala (Sarah Jessica Parker), a singer in New York City who lives her life for herself and her art. On the eve of a major performance at the iconic Birdland Jazz Club, she receives shocking news during a doctor’s visit that shatters her world and jolts her to her core. The story then follow Vivienne over a compressed 24-hour window as she struggles to deal with the devastation during rehearsals with her band and her manager, Ben (Common), for the show at the jazz club and her upcoming world tour. She also tries to navigate her relationships and familial obligations, as she attempts to avoid her overbearing mother, Jeanne (Jacqueline Bisset), and contemplates sharing the news with her ex-husband and teen daughter.

With the weight of the diagnosis bearing down on her, Vivienne grapples to make peace with the city around her and those who inhabit it. As she reflects on her life’s successes and failures, as well as her past and her future, a chance encounter with an unlikely friend ultimately helps her come to terms with her new reality.

Bacardi and Iervolino generously took the time to sit down for an exclusive interview at The Beekman Hotel in New York City to discuss producing ‘Blue Night’ during the Tribeca Film Festival. Among other things, the duo discussed how they were drawn to produce the drama because they appreciated its important message that people’s perspective on life can instantly change after they, or someone they know, is diagnosed with a serious illness. They also shared their appreciation that the movie premiered in New York at the Tribeca Film Festival, especially since the drama is set, and was shot, in the city.

The conversation began with Bacardi explaining that she wanted to work as a producer on ‘Blue Night’ because she feels that it “gives a very important message to the world. We’re all passing through this life, and we don’t know for how long. Any one of us can discover that we, or someone we know, has developed a bad sickness. That changes your whole life, and the way you see life. So we can all be touched by this film, because we all can have the same experience” that Vivienne has throughout the story.

Iervolino added that their production company, AMBI Pictures, produces a variety of films, but “the movies we really like to work on are the ones that change people’s perspective of life, and give a positive message..’Blue Night’ can help people realize how important it is to have love and relationships in life. Everyday, we wake up and think we’re invincible, but we have to realize that there are important things we have to cherish, like love and friendship,” he shared.

The producer also pointed out that the movie focuses on “a singer who discovers she may not have long to live. So she goes to meet her family, including her mother, daughter and ex-husband, and we, as an audience, realize that she has issues with all of them. So the movie shows how important it is to be able to speak with family, and learn how to appreciate things more. So I think this movie, like many of our other films, can really inspire people. In the end, it’s a positive story with a positive message.”

The pair then delved into their involvement in the casting process on ‘Blue Night.’ Bacardi noted that they had previously worked with Parker on the 2015 romantic comedy, ‘All Roads Lead to Rome.’ The movie “was made in Italy, and it was a great experience. We loved working with Sarah, and she’s a great actress. So we had the opportunity to reunite with her on this film. She was also a producer, and also starred in the lead role, in this movie. We get to see a new Sarah, because she was known before for ‘Sex and the City’ and her other comedies. She’s very good in this touching and very dramatic role,” the producer emphasized. “We’re very happy to be a part of this movement, and co-produce this film with her.”

Iervolino then revealed that he, Bacardi and the rest of the AMBI Pictures team feel it’s vital to have women working on both sides of the camera. “The writer of the movie is a woman (Laura Eason), and some of the other producers are also women. The majority of the cast is also women. So I think this is a perfect example of equality. But this experience of working with so many women is no different for us.”

Bacardi agreed with her co-producer’s sentiment, and enthusiastically noted that she thinks women “have a lot of power, and we’re very strong, just like men. Men and women not only have to respect each other, but must also join forces!” She added that she’s “very happy that a lot of women were involved on this movie. If you look back on history, there aren’t a lot of women who produce, direct and write films, but I think there’s a place for us now in filmmaking.”

The experience of collaborating with Constant on ‘Blue Night’ was also something that the producers also savored. Iervolino noted that the drama is “Fabien’s first narrative movie. Before he worked on this project, he directed some great documentaries. So moving into this type of film was very natural for him,” the producer divulged. Iervolino added that Constant is “French, but he proves what a great director he is by showing that he understands the U.S. and its culture. Many people say that European movies are all about showing the story’s sentiment, as well as love, which Fabien also understands. Since this story is also about love, I think he was the perfect match for this film.”

The producer also noted that he thinks that Constant and Eason were the perfect match to bring ‘Blue Night’ to the screen, because the scribe is also known for penning episodes of ‘House of Cards.’ “So the movie isn’t too European or American-it’s a good combination of the two cultures,” Iervolino further emphasized.

Visiting the sets of their projects is something that the duo also enjoys, Bacardi then shared. “We love to go to the set to see how things are going, and to also collaborate” with the rest of the crew and the cast. “It’s very important to us to oversee the whole process, from pre-production to principal photography to post-production. It’s a long process, and it takes a lot of work, to put a whole film together, from the beginning to the end. Then you also have to find distribution, and oversee the release. But we’re happy to be part of the process, and we’re proud of this work!”

Iervolino added that “Since we’re always working on several projects at the same time, we sometimes can’t visit the set of every movie. But we always like to watch the dailies, so that we can see what’s going on on the set. That way, we can give our advice. Since making a film is a long process, we like to stay on top of everything.”

The producers were able to visit the set of ‘Blue Night,’ which was shot in New York City, and the pair cherished the experience of making the musical drama on location in America. “New York is so vibrant!” Bacardi exclaimed. “But every movie has its own history, and is made differently, whether it’s shot in New York or elsewhere in America, or in Europe. So we like to shoot in different places, because we like to release films that show different cultures and mentalities, and bring people together and open their minds.”

Having ‘Blue Night’ have its World Premiere at the Tribeca Film Festival in New York City is an experience that the producers also appreciate. Iervolino noted that “We had another movie premiere here two years ago, ‘Lavender,’ and we had a good experience at the festival. This festival is perfect for this type of film, especially since we shot it here in New York. So we’re very happy to be back at Tribeca, and we hope that we can keep coming back every year!” 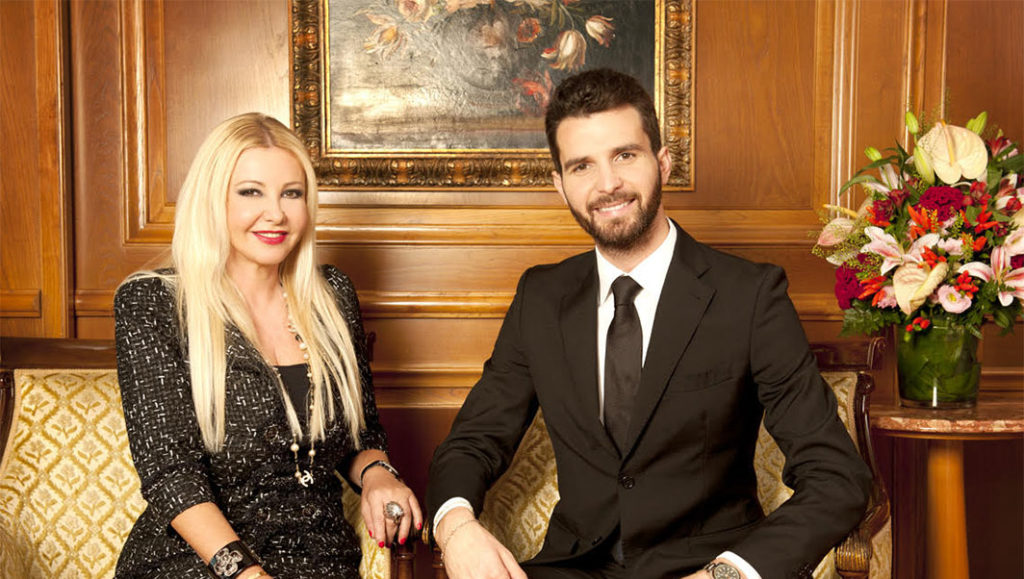