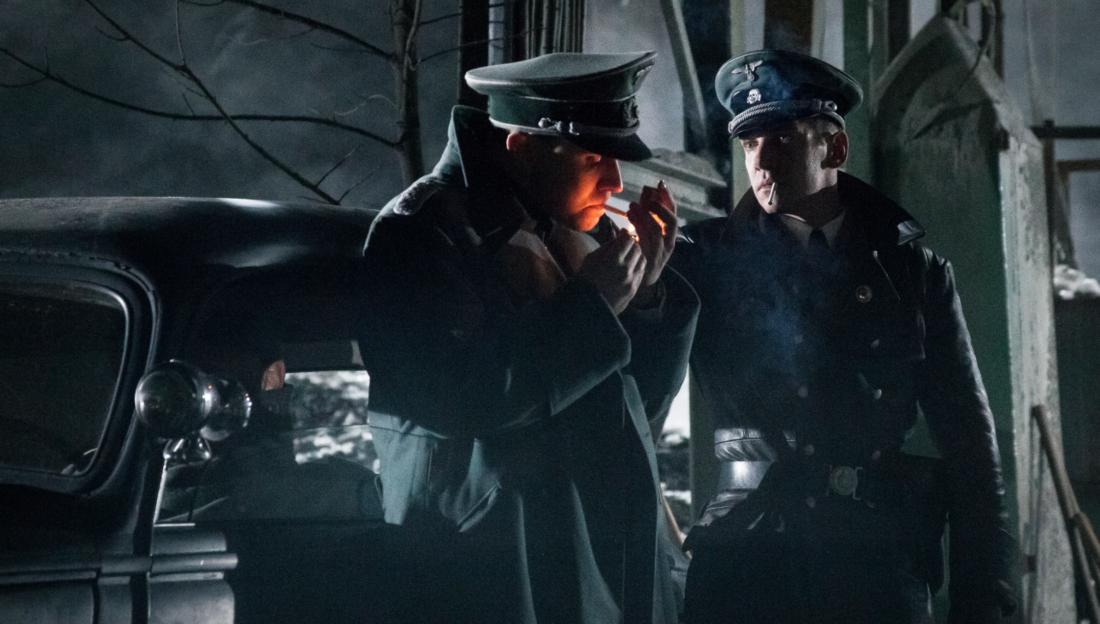 When you see a title like this one you can’t be blamed if you think it’s about the one guy who leaves a jury hanging, the only not guilty vote in the dozen. This is a story about an even more unusual fellow, though, a man who risked far more than a member of any jury would and whose long days of suffering would seem almost unprecedented even in the midst of a global war. In fact it’s difficult to believe that the story is true, and yet I’ve heard at least one moviegoer who is usually in the know mention that the true facts are even more unbelievable. Again: life is stranger than fiction.

Harald Zwart, the Dutch-born director, is known here in the U.S. for contributing such commercial works as “Pink Panther 2” and “The Karate Kid.” This time he casts his net on a bigger catch, one with more tension than can be found in those two previous movies and his “Agent Cody Banks” put together. The dialogue is in German except for an opening scene in Scotland, giving the British actor Jonathan Rhys Meyers a workout as he must chuck his native English (or, if you prefer his Irish) to take on the role of a high-ranking officer in the Nazi war machine. If that’s unusual, what would you make of a Norwegian hip-hop performer, Thomas Gullestad, in the role of a commando, taking part in a planned sabotage of German facilities in his native Norway?

Though the mission fails, Jan Baalsrud (Thoams Gullestad) is given the hero treatment for his tenacity in using non-traditional methods to be the only person in the mission to escape, while the others are captured and executed. You might think he would find his hapless friends lucky to be shot, Jan suffering a deadly gunshot wound in his toe, making his way across Northern Norway, snow-covered with freezing water in May. In hot pursuit we find Obersturmbanfuhrer Kurt Stage (Jonathan Rhys Meyers), a Nazi who brags that nobody ever escaped under his watch. He tracks Jan like Victor Hugo’s Inspector Javert, refusing to give up while diverting his unit by vehicle across the fjords. Were it not for ordinary Norwegians who risked death by helping the man get away, he would not have come within a few miles of Norway’s border with neutral Sweden, marked in the snow by a simple barbed-wire fence though surveilled by a Nazi guard post.

The only guts the movie audience needs is a willingness to watch Jan empty half a bottle of whiskey before cutting off his gangrene-infested toe. We cheer for the help he receives, among others from Marius (Mads Sjogard Petterson) who together with his sister Gudrun (Marie Blokhus) risk execution if their underground activity were uncovered. The most amusing scene finds Jan on skiis, given to him by a helpful Norwegian bumping right into Kurt Stage, even falling on his butt, only to have Stage come up with “I thought Norwegians knew how to ski.” How a man who rose in the ranks of the Nazi party could not have considered this collision almost a sure indication that Jan is the man he seeks is beyond me.

The tension continues throughout, though the audience, if familiar with the true account of the chase in 1943 would know the outcome. Jonathan Rhys Meyers makes the perfect villain, obsessed with his inability to capture a single, heavily wounded man. Special credit for the quartet in the make-up department and for Geir Hartley Andreassen behind the lens, especially with the vista of the Northern Lights. One item of curiosity. This was filmed in Troms, supposedly in May 1943, in the Northern part of Norway where the midnight sun begins in June, yet we have many scenes in pitch darkness. Why so?

In German with sharp, yellow subtitles taking the place of the pallid white subtitles so prevalent in European cinema.