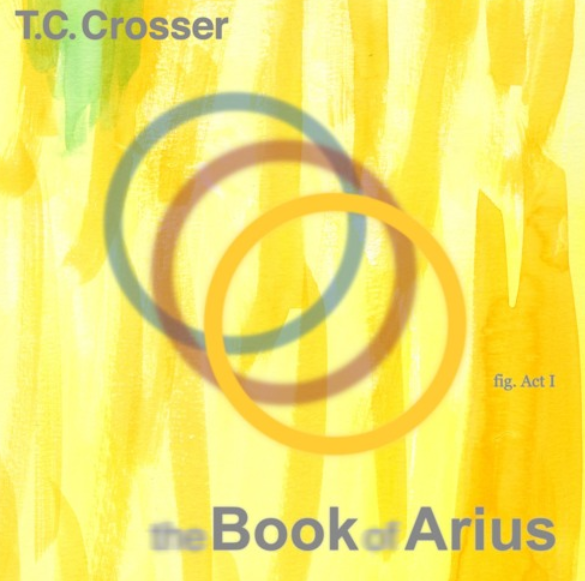 The cover for composer T.C. Crosser’s debut EP, ‘The Book of Arius – Act I.’

Fearlessly and openly confronting the most difficult and distressing aspects in life, especially in a public forum, isn’t an easy process for many people. But candidly sharing his existence-saving experience with his listeners is the most cathartic way for composer T. C. Crosser to fully introduce himself to the world as a solo musician. The instrumentalist, who has previously worked as a multi-faceted pianist, composer and producer for other musicians, commercials and television shows, is now emerging as a visionary artist in his own right.

Crosser has effortlessly brought his emotionally healing composing style and punk rock sensibilities to his emotionally compelling new debut EP, ‘The Book of Arius – Act I.’ The expansive four movement album is powerfully driven by a personal instrumental narrative that’s built around the brilliant performances of an all female string quartet.

‘The Book of Arius – Act I,’ which is Crosser’s most personal and autobiographical series so far in his musical career, features cities in the subtitles for each movement, which are actual places he has lived and experienced traumatic incidents. The movements all masterfully convey how those circumstances, especially from his childhood, have painfully influence the rest of his life, until he finally became ready to deal with the issues as an adult.

The first entry on the musician’s new EP is ‘White Sulfer Springs,’ which is the location of a vacation he took with his now partner. While there, Crosser realized he was an alcoholic and drug addict, and decided to take control of his life and become sober. The section features stunning, rich and deep textures that lead listeners on an engaging emotional journey. The strings are full of soulful intensity, and offer insight into the pain and sadness the musician contended with when he first decided to seek treatment. The strings also initially showcase the heart-wrenching pain Crosser has experienced in the process of becoming sober, before the entry transforms into a more hopeful piece that showcases that he has and faith in his future.

‘White Sulfer Springs’ then transitions into ‘River City,’ which features intriguing moments of contrasting textures. While the sophomore section is distinct from its predecessor, it’s still emotionally intense. The entry’s title is the nickname of Crosser’ss hometown of Mason City, Iowa, where he grew up as the oldest of six children from different fathers, and faced the brunt of his mother’s verbal and physical abuse. The section powerfully features insight into the musician’s troubled childhood, particularly within his family, and how such a tense upbringing can drive a person like Crosser to seek a better and more stable life as an adult.

‘Goose Creek’ is the penultimate entry on The Book of Arius – Act I,’ and references when Crosser joined the Navy when he was 18. Upon joining, he was stationed at Goose Creek Naval Weapons Station in South Carolina. While in the Naval Nuclear Power Training Command, he publicly revealed that he’s gay, and was subsequently discharged because of the admission. After leaving the Navy, he embarked on his nomadic musical travels.

The third section perfectly emphasizes the balanced acoustic environment on the musician’s first EP. It offers a profound insight into Crosser’s struggle to contend with the emotional struggle of being discharged from the Navy because of his sexual preference. But he has learned from the experience how to be confident in himself and who he is as a person. The strings show that while the experience was painful, it hasn’t diminished his optimistic about the future of his relationships and career endeavors.

The last entry on ‘The Book of Arius – Act I’ is titled ‘Hell’s Kitchen,’ where the versatility of the quartet is the most powerfully showcased. The instrumentalists easily and captivatingly execute the composer’s dramatic sound. The title neighborhood in New York City is where Crosser now lives with his partner of three years, and where he has also been sober during that time. The resolution to his debut record highlights how he’s creatively and emotionally fulfilled for the first time in his life. The impressively distinct and potent last section leads the EP to end on a reflective and more positive note, as the musician has finally realized that despite his painful past, he’s destined to have a brighter future.

‘The Book of Arius – Act I’ is a powerful debut EP from Crosser, as it allows him to showcase his versatility as a composer who can reflect on his own troubled past to craft a stunning and noteworthy project about the positive possibilities that the future may bring. The four-section autobiographical project weaves an emotional and insightful narrative that’s based on the most distinct and defining moments in his life.