Exploring some of the most remote places on Earth can actually lead to vital discoveries that entirely change humans’ understanding of nature, and offer new hope for restoring the world. With the help of pioneering scientists, people’s view on nature will forever be improved. The groundbreaking new film, ‘The Serengeti Rules,’ is powerfully shining a light on restoration projects across the world.

‘The Serengeti Rules’ is based on the 2016 book of the same name by Sean B. Carroll. The documentary was written and directed by Emmy and BAFTA Award-winning environment filmmaker, Nicolas Brown. The revolutionary movie from one of the UK and USA’s leading documentary filmmakers had its World Premiere in the Spotlight Documentary section at this year’s Tribeca Film Festival.

‘The Serengeti Rules’ showcases how beginning in the 1960s, a small band of young scientists headed out into the wilderness, as they were driven by an insatiable curiosity about how nature works. Immersed in some of the most remote and spectacular places on Earth—from the majestic Serengeti to the Amazon jungle, the Arctic Ocean and the Pacific tide pools—they discovered a single set of rules that govern all life. Now in the twilight of their eminent careers, these five unsung heroes of modern ecology—Bob Paine, Jim Estes, Mary Power, Tony Sinclair, and John Terborgh—share the stories of their adventures, and how their pioneering work flipped humans’ view of nature on its head.

Across the globe, they discovered that among the millions of species on our planet, some are far more important than others. They called these species keystones, because they hold the natural world together. But unfortunately, these deep connections also work in reverse. When keystones are removed, ecosystems unravel and collapse—a phenomenon no one had imagined, or understood, until their revolutionary discoveries.

But with new knowledge also comes new hope. These same visionaries reveal the remarkable resilience of nature, and how the rules they discovered can be used to upgrade and restore the natural world. They give us the chance to reimagine the world as it could and should be.

Brown generously took the time to sit down for an exclusive interview at The Roxy Hotel in New York City to discuss writing and directing ‘The Serengeti Rules’ during this spring’s Tribeca Film Festival. Among other things, the scribe-helmer discussed that he decided to interview and spotlight the five scientists who are featured in the documentary, because they all have intimate and important knowledge of modern ecology. The filmmaker also expressed his appreciation that the movie received a positive reception during its premiere screening at Tribeca.

The conversation began with Brown discussing how the film was inspired by, and started with, Carroll’s book. “Sean approached us and asked, ‘Can we turn this into a movie?’ When we first looked at it, we said ‘No, it’s impossible.’ We then took another look, and then said, ‘Well, maybe there is something in here that we can bring to the screen,” the filmmaker revealed.

“If you read the book, it’s very expansive. So we focused on the latter half of the book. We found some characters who could humanize the story, and who the audience could follow. There were five people we choose to follow,” Brown explained. “We thought, maybe this could work, as the subject’s important. But making a film out of this story was one of the biggest challenges I ever had to wrap my head around.”

The director then delved into how much he relied on Carroll’s book, and how much creative liberty he took, when he began adapting it for the screen. “I think when you make a movie that’s based on a book, you read the book, and then throw it away. You think about what’s going to work best for a film,” Brown shared.

“But books have all of this important information, and all of the subjects in Sean’s book are interesting and important to read about. But you’re always picking up, and putting down, the book, and take the information as you can,” the director also pointed out.

“As we narrowed the narrative down, we thought, this might just work. But we took a huge gamble, especially since making a movie about natural history is so expensive, and takes a lot of time,” Brown admitted. “But we decided to go for it over two years ago.”

After the helmer and his production team chose the characters who would appear in the film adaptation of ‘The Serengeti Rules,’ “we decided to put the book aside and do interviews. We interviewed each person for at least a day, and in some cases, it was even longer. I think with Tony Sinclair, we talked for two or three days. So we got their stories and connections. What comes across in that is a far more personal view is how they fell in love with nature, and how they then decided to dedicate their life to it,” Brown shared.

“They have such a wealth of knowledge about these locations. We then began to look into what’s similar between their knowledge. The major similar idea is that one species can hold the entire ecosystem together,” the filmmaker revealed.

Following up on the scientists he spoke to for the documentary, Brown added that “We picked our characters based on the resonance of where they were in their work. There are many people who study this, but the work of the people we chose to include really stands out. You can see the change brought on by the work of such people as Bob Paine, Jim Estes and Mary Power,” he pointed out.

“But Tony was the one who was off doing his own research, and what he found was really unparalleled…Tony had the good fortune to study the Serengeti. So we could see a structure there that could help viewers understand” the projects the scientists are working on, the director added.

“Tony’s story shows that if we put keystones back in, nature can reconstruct itself in breathtaking ways. Tony testifies to that in the film, as well as the fact that scientists had no idea how great the Serengeti was in the 1960s. It wasn’t until the ’80s that they realized what happened when you return the keystones, and how much more life can be sustained,” Brown also emotionally shared.

The filmmaker then delved into some of the technical aspects of shooting ‘The Serengeti Rules,’ including working with his Director of Photographer, Tim Cragg, who he described as a genius. “We worked very closely together on working on the drama. For the interviews, I was largely led by his ideas. I had some of my own ideas, but we also discussed such things as how I wanted to shoot with vintage lenses and shallow depth-of-field, which would evoke a certain period of time,” Brown disclosed.

“There was also a whole other part of the film that just focuses on natural history, and that wasn’t shot by Tim; we instead worked with specialists. There’s a shot in the movie of a sea otter that’s underwater, which was one of the hardest things to get,” the helmer admitted. “Jim Estes has spent 50 years studying sea otters, but has never seen one underwater. They don’t like to be underwater with humans, so we had to find places where they might live. But it ended up that we couldn’t afford to get the shot ourselves, so we went into co-production with the BBC, so we could get that one shot of sea otters underwater. So photography of natural history is a highly specialized area that’s completely separate from drama or interviews.”

Brown then delved into what the editing process was like on ‘The Serengeti Rules,’ and confessed it was a challenge. “We started by assembling the interviews, and not shooting the frame of anything else. We started to think about what the overall story would be. So I worked closely with the editor, Andy Worboys, who’s also brilliant. He’s an award-winning guy.

“Andy and I first assembled what we call a radio edit, in which we worked out the narrative, and what the best story would be to tell. We then put the edit on hold, as we went and shot everything. We then came back to it, and of course, we had a very different film at that point,” the filmmaker explained.

“I think throughout the process, none of us thought it would work. We were worried, because I don’t think we’ve seen a film like this before,” Brown pointed out. “It’s pretty different; it’s not just a natural history film, and it’s also not just about animals. It’s a mash of science and personal storytelling about natural history, environmentalism and conservationism. It’s also a new way of thinking…So we created a mash-up of a film to lead people to that way of thinking.”

The director then shared what the experience of presenting ‘The Serengeti Rules’ in its World Premiere at the Tribeca Film Festival. “This is my first feature documentary, so I didn’t know what to expect,” he admitted. “The premiere screening was the first time the people who are in the movie saw it on the big screen. So initially, it was work, worry and stress.

“But then when we showed the film, it felt like we were walking into a dream, and it was amazing. The audience loved it, and stood up and clapped. It was a really warm reception, and I hope the rest of the world is so kind. The premiere was one of the best days of my life, as I was finally able to share two years worth of work. It was a good moment,” Brown revealed. 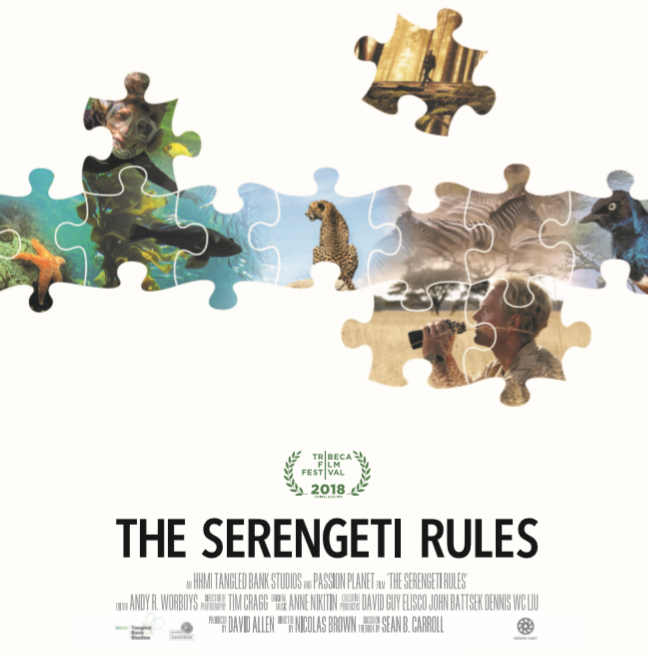