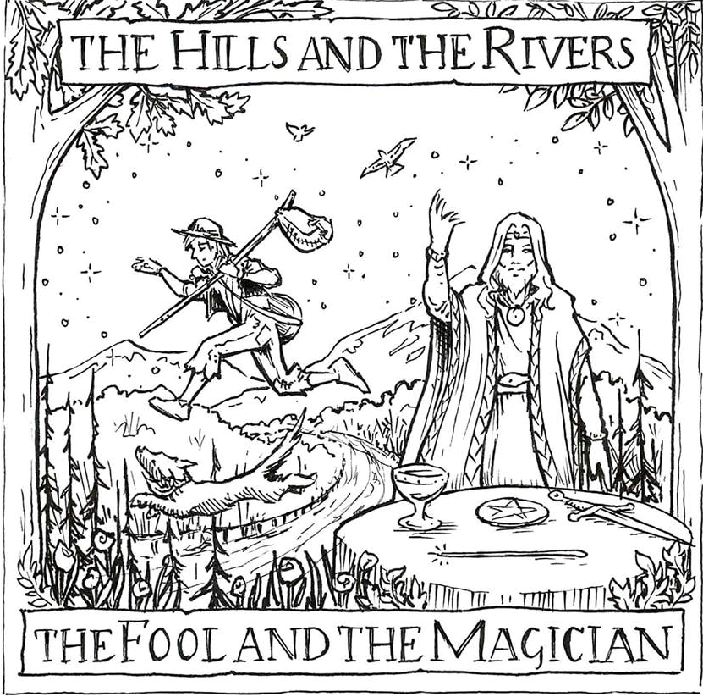 The cover for The Hills & The Rivers’ folk album, ‘The Fool and The Magician.’

Album: ‘The Fool & The Magician’

Album recorded at Etc. Audio Lab, and mastered by Chris Rudyk at MixHaas

Determinedly searching for hope, peace and true connections in a chaotic world is becoming increasingly more arduous. But the true innocence of that driven pursuit hasn’t completely disappeared just yet, as proven by the eight-piece band, The Hills & The Rivers. The street folk family group, which hails from Pittsburgh, and fronted by the Hill family’s four oldest siblings, has recently released its inspirational, relatable and moving third album, ‘The Fool & The Magician.’

The ten tracks on the new record feature all-too-important lyrics that draw from such vital themes as ecological destruction, political upheaval and religious beliefs, which are supported by enthralling acoustic instruments. The songs are powerfully threaded together, as they’re all based on the foundation of personal transformation.

The Hills & The Rivers, which draw meaningful inspiration from such folk revival artists as Leonard Cohen, Bob Dylan, Shirley Collins and Sweeny’s Men, begin ‘The Fool & The Magician’ with the instrumental introduction, ‘Zero.’ The short, but overall soulful and meaningful, entry naturally sets the tone for the rest of the album.

The sophomore song on the band’s latest record is one of the title tracks, ‘The Fool,’ which is the musician’s newest single. The tune is an empowering anthem that encourages its listeners not to be held back by someone who doesn’t return their positive emotions. The musicians also inspire their audience to love the life they live, and not be weighed down by deceptions and lies.

‘The Fool’ then delves into ‘The Leap,’ which is one of the best tunes on the album. The entry, which is more upbeat than its predecessor, is a gripping and contemporary take on the musicians’ query into the changes that are occurring around them in society. The group also inspirationally ponders how the path they’ve taken, and the choices they’ve made, has led them to the life they’re currently leading.

Another truly outstanding and noteworthy song on ‘The Fool & The Magician’ is ‘The Road,’ which features an intriguing mix of vocals from Heidi Hill, as well as her brothers. The singers emotionally croon how they informed the people in their lives who they were from the beginning of their relationships, but they still faced challenges in some of those connections. The relatable track also highlights how people often yearn to improve their lives, but they instead frequently face challenges that make them ponder what choices to make.

The next tune on The Hills & The Rivers’ new record is ‘Gotta Get My Thrill,’ on which the band members beautifully expose their souls during more more uptempo vocals and instrumentation. The entry, which is truly distinct in sound from its predecessors, and proves that the group is musically versatile, highlights the musicians’ willingness to share their emotions with people who are interested in their lives.

The follow-up entry on ‘The Fool & The Magician’ is ‘Mmbop, which is a short interlude that features soulful hymns that highlight The Hills & The Rivers’ meaningful spirituality. Another spellbinding instrumental song is the eighth track, ‘The Hawk and the Dove.’ The tune features a dark violin that tells a powerful story of the journey of grappling with pain and overcoming fear, as the band members are fueled by a desire to succeed, no matter what obstacles they’re faced with.

Another gripping and meaningful entry is the seventh song, ‘Middle Garden.’ On the track, the band members powerfully state through their ravishing signature and slow-paced male and female vocals that their life experiences will lead them in the right direction.

The penultimate tune on ‘The Fool & The Magician’ is ‘The Valley,’ which features an intriguingly darker theme. The singers intensely proclaim that no matter what the people in their lives do, they can never take away the truth. The musicians also powerfully realize that they must travel alone, in order to capture the life they desire.

The title on the final entry on ‘The Fool & The Magician’ enthrallingly plays off the name of the record’s sophomore song, as the last track is called ‘The Magician.’ The band members stunningly and memorably reveal their deepest emotions one last time, as they note that people in their lives will try to turn away from them, even if they don’t have anywhere else to go. While the musicians are pained that they continuously chase the people they’re eager to follow, even if they don’t prove their loyalty, they relatably realize that they need to do whatever it takes to instead focus on improving their own sense of worth and acceptance.

Earnestly searching for hope, peace and authentic connections in a chaotic world is becoming increasingly more difficult. But the true innocence of that driven pursuit hasn’t completely disappeared just yet, as proven by The Hills & The Rivers. The eight-member street folk family group has recently released its moving album, ‘The Fool & The Magician.’ The record feature all-too-important lyrics that draw from such society’s most important contemporary issues, which are supported by enthralling acoustic instruments. The songs are powerfully threaded together, as they’re all based on the foundation of personal transformation in an at-times frightening world.