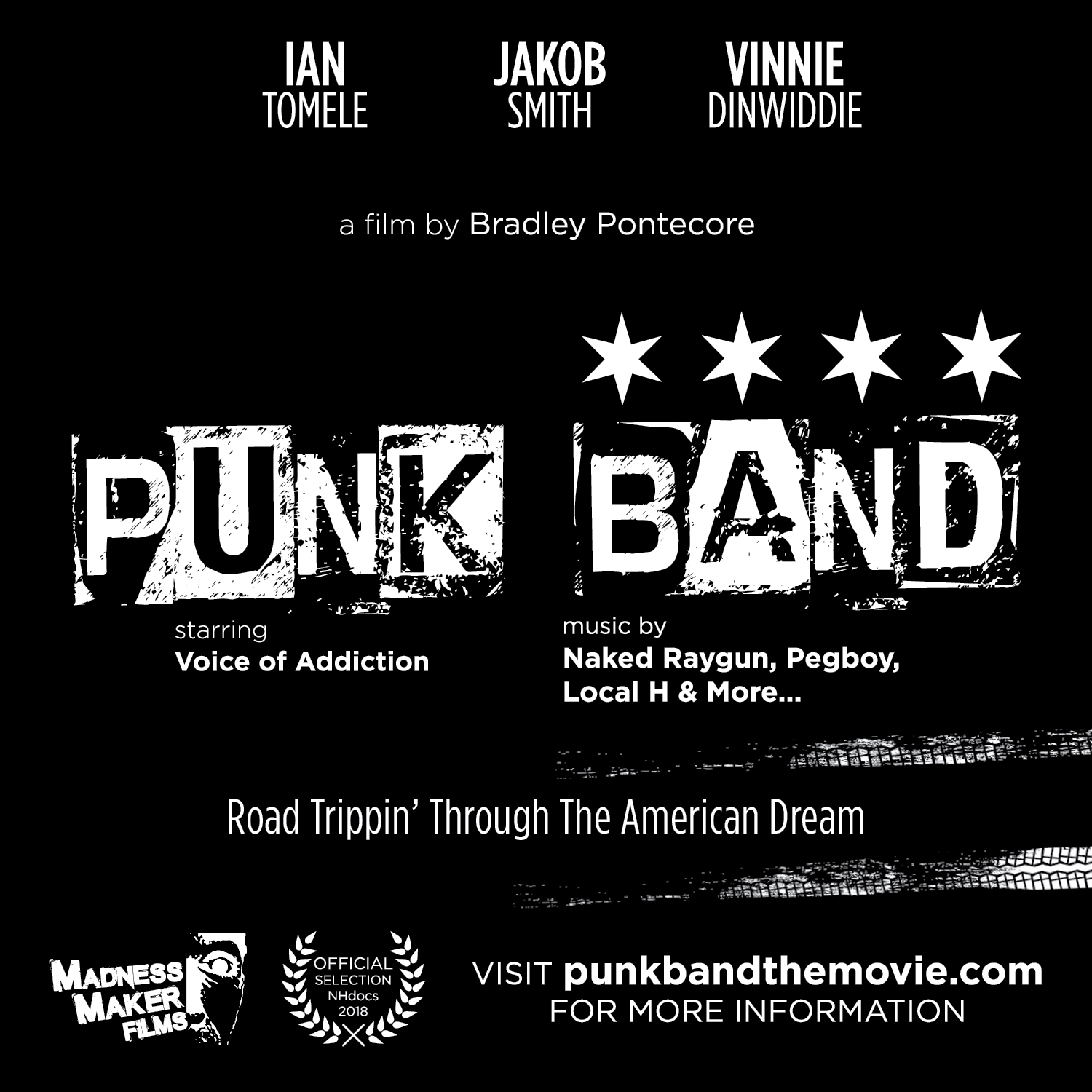 Music fans can now experience the tour-driven whirlwind of misadventures, as well as the ultimate self-implosion, of veteran Chicago punk trio, Voice of Addiction. The musicians’ adventures are highlighted in their newly released documentary, ‘Punk Band.’

The movie’s Blu-ray is now available for $17.99 on the website for its production company, Madness Maker Films, and is also streaming on Vimeo. The documentary is expected to receive major distribution at a later date.

‘Punk Band’ was crafted by veteran movie writer-director, Brad Pontecore. The filmmaker, who also serves as the head of Madness Maker Films, snagged the ultimate moment of truth from Voice of Addiction’s frontman and bassist, Ian Tomele.

In celebration of ‘Punk Band’s home release, Shockya is offering five lucky winners a Blu-ray of the film, which is signed by Pontecore. To enter, email, us at ShockyaGiveaway@aol.com. Let us know that you’re entering to win the ‘Punk Band’ Blu-ray giveaway in the email’s subject line and message. You have until next Tuesday, July 24 to enter, and you can enter the contest once daily. After July 24, we’ll pick the winners at random, and notify them through email. Good luck!

Pontecore and Tomele will host a release party for the documentary on August 17 at the Beat Kitchen in Chicago. After the screening, there will be performances by Voice of Addiction and other bands that are featured on the movie’s soundtrack, including 88 Fingers Louie, Pegboy, Local H and Naked Raygun.

Pontecore was introduced to Tomele, who launched the group’s original lineup in 2003, by one of ‘Punk Band’ producers, Mark Dannels, the following year. The director then became a longtime friend of the singer, who had been suggesting a chronicle of life on the road with the band for years.

Pontecore then followed Tomele, guitarist Jakob Smith and drummer Vinnie Dinwiddie through 34 cities in 17 states, over the course of four-and-a-half weeks in October 2016. The 2016 American presidential election made for the perfect backdrop for a politically and socially conscious band like Voice of Addiction.

Following the filming process, Pontecore and his editor, Jacob Schaer, spent months editing some five terabytes of footage of Voice of Addiction’s tour. Though he had directed numerous music videos in the past, the helmer’s aim with the documentary was to instead create a road movie in the classic Hollywood style. Interspersed among the fiery performance clips are deeply revelatory moments by each band member, highway footage and the tense moments and fights which eventually led to Tomele firing Dinwiddie and Smith quitting.

“The experience was grueling at times, but it made me happy to have a great time with every performance,” Pontecore said. The filmmaker was also drawn to “Seeing all the intensity (Ian) puts into this – even when there weren’t a lot of people there. The guy has an incredible work ethic…Besides his incredible songs, I find him to be a very empathetic guy, who always takes in people when they are in Chicago and need a place to stay. After a while, I felt like being around Voice of Addiction was like participating in a family – sometimes dysfunctional but always a place where you feel at home.”