A Prayer Before Dawn Movie Review 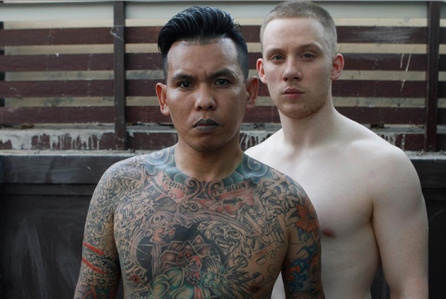 Prisons in Norway allow even murderers to have their own rooms complete with kitchen knives and the accoutrements of middle-class living. If you think those cells are more comfortable than the jails in Thailand, you’re just guessing, aren’t you? To check your answer, you’ll have to see “A Prayer Before Dawn,” based on the memoir written by Billy Moore in 2014 which went on to the best-seller lists. One might wonder whether the horrors of the Klong Prem prison in Thailand, nicknamed the “Bangkok Hilton” by people who are aware that Senator John McCain stayed for five years in the so-called Hanoi Hilton, can be brought out by the book. After all, with Jean-Stéphane Sauvaire’s movie, the pure physicality is in your face. Sauvaire, whose freshman narrative feature “Johnny Mad Dog” deals with child soldiers in an African country, is the obvious man to chart the true story of a British boxer and heroin smuggler who, in Thailand, becomes addicted to ya ba (a particularly potent Thai crack cocaine) and makes a living selling drugs.

The book cannot replicate the punches and kicks and the torment from fellow prisoners at Klong Prem, but with some imagination, the powerful writing of Billy Moore draws you into the violence you’ll see in this film. Take for example this wording: “The first time Billy Moore walked into his cell packed with seventy prisoners, the floor resembled a mass grave, with intertwined arms and legs, and the smell of human feces was so strong he almost vomited. That night, he slept next to a dead man. It wouldn’t be the last.”

Sauvaire does indeed show Billy sleeping next to a dead man, who is carted off nonchalantly by the staff, and the most horrific scene does not take place in the boxing ring where the Thai brand of fisticuffs is called Muay Thai. It is Billy’s brutal gang rape that forms the prison’s rite of initiation. Though the editing is itchy, you get the point that you’re better off going straight all your life.

The film does frustrate the viewer in that we don’t know why Billy Moore (Joe Cole) went to Thailand where he appears to be the only farang, or foreigner, but his memoir notes that he went abroad to escape a life of heroin addiction and alcoholism in England. That’s strange. Would he not be better off staying in Western Europe to attack his demons? Perhaps he thought that indulging in Muay Thai, which allows pugilists to use stand-up striking along with various clinching techniques, would draw the drugs out of his system. This discipline is known as the “Art of Eight Limbs” because it is characterized by the combined use of fists, elbows, knees and shins. And the masochists who indulge are lucky if the Thai promoters bother giving you a mouth guard, but I would not personally indulge even if they gave me knee pads, a helmet, a bulletproof vest, and an opponent who weighs 90 pounds.

When Billy is not in the ring, he is tormented by the prisoners, who have contempt for a foreigner who doesn’t speak a word of Thai, has no money, allegedly has no family, and cannot even let a fellow bum a cigarette. The boxing is filmed in the usual way with restless editing, which may be necessary if you want your actors to emerge alive but which can nonetheless be frustrating. Some of the Thai dialogue has English subtitles but most of the palaver of the prisoners can be understood without translations.

This is all about Billy’s redemption, a man who emerges after three years in a Thai hell-hole, then serves time in the UK. He converts to Islam; strange since 95% of Thais are Buddhists and most of the rest Islamic. As principal actor Joe Cole has had prominent roles in other physical dramas, a standout being the character Reece in Jeremy Saulnier’s “Green Room” which finds a punk rock band forced to fight for survival after witnessing a murder at a neo-Nazi skinhead bar. “A Prayer Before Dawn” shows him with mostly neutral emotional makeup, until he gets a legitimate chance to let it all out in the ring. In a final scene we see Billy’s father who in real life is…Billy! He looks terrific but who needs to go through the crunches and the displaced bones before being redeemed? Outside of Joe Cole, the actors are all Thai and, I believe, mostly former prisoners. You can catch an interview with the director here: https://deadline.com/2018/03/a-prayer-before-dawn-jean-stephane-sauvaire-sxsw-interview-1202339121/