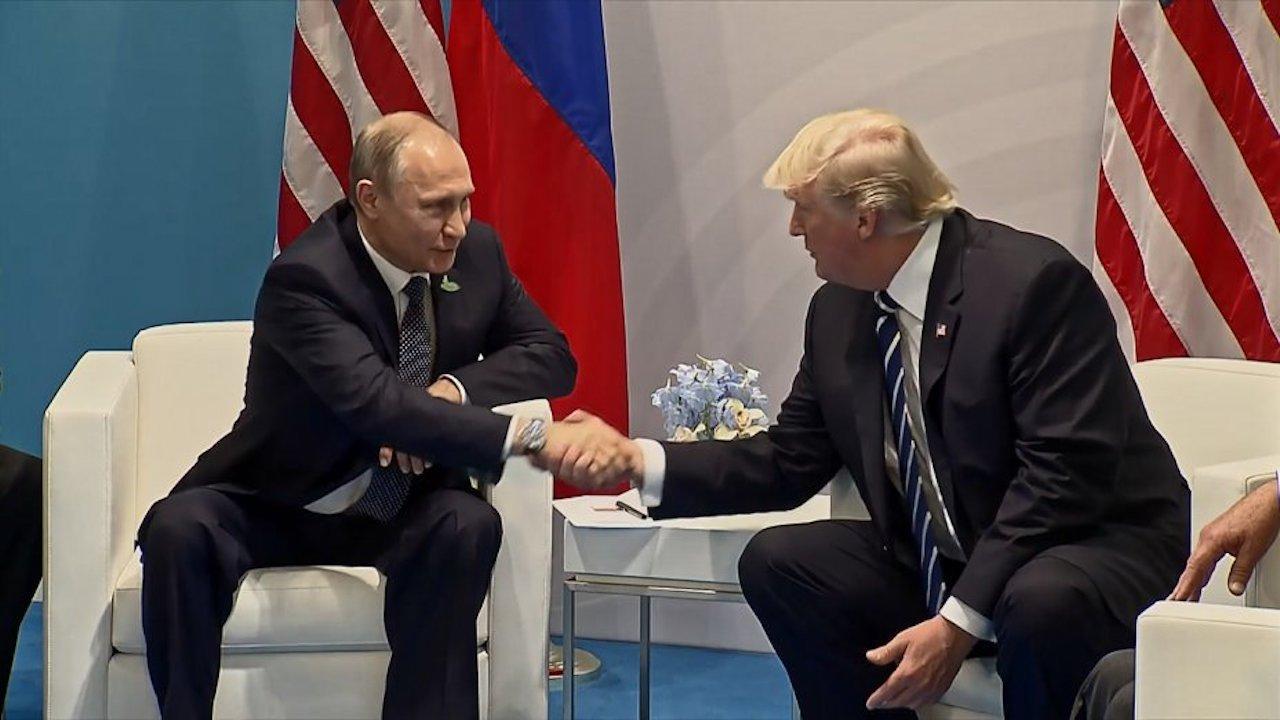 In the concluding scene of Spike Lee’s terrific new movie “BLACKkKLANSMAN,” the director shows an extended close-up of the American flag, upside down, the sign of distress. Anyone who doesn’t get all the news from Sean Hannity must realize, just as Spike Lee does, that the U.S. is underdoing serious problems: forget about the temporary successes like full employment (largely with crap wages) and a booming stock market (why not tax corporations 0%, and then watch a real boom)! Jack Bryan, whose previous ventures includes “Life After Dark: The Story of Siberia Bar,” about the demise of New York’s most dangerous bar and not about Siberia at all, this time targets both our own President and the man who rules Siberia, among other areas of that country, Vladimir Putin. Bryan, whose final scene is a large, simple sign stating “Resist,” is not calling upon moviegoers to resist the tactics of Bernie Sanders, Hillary Clinton, and former Russian ambassador Michael McFaul, but rather to push back against the corruption in our present administration, which has already seen a record of number of high level government employees fired or turning in their resignations. If the head of Human Resources in any major corporation hired people who left their jobs by the hundreds, that department leader would be gone soon enough.

Still, despite the plethora of talking heads to afford us layer after layer or information about our current dangerous administration, Bryan focuses on one issue to avoid diluting his screed against President Trump. And that is his belief (and that of any thinking person) that Trump is Putin’s poodle. People who go to this film will already have a good idea of what “Active Measures” covers from watching the un-Fox news channels, especially CNN and MSNBC (with a special gold star for the Rachel Maddow Show), but here we have archival films showing Putin to be a dangerous man and, by extension, any person in thrall to the former Soviet KGB officer must be a threat to our country a well.

Putin is a fellow who, like many of his countrymen, is furious about the break-up of the Soviet Empire, the surrounding of his country by former satellite nations like Ukraine who are NATO members. He desires to restore the bad old days of Soviet imperialism. Letting nothing get in his way of the dream of empire, he has already invaded Georgia, Ukraine, and annexed Crimea to his land. He is suspected of ordering assassinations of his chief critics whether in Russia or outside. And here is the key point: he has been manipulating American elections not only since the Trump campaign of 2016 but of our internal matters for decades earlier, with hundreds of spies still living in our great republic, some right in Manhattan’s Trump Tower. This brazen attempt to influence our politics is what the Russians call “active measures.”

With a script that Bryan wrote along with Marley Clements (in the latter’s freshman entry into the script-writing pool), we get the impression that outside of Trump himself, the baddest guy is Paul Manafort, now on trial for tax evasion and money laundering, while giving air time to a number of Russian oligarchs, principally the people who took advantage of the restoration of public business to the private sector and who came out millionaires from bargain prices. Putin used social media, Facebook in particular and, like Trump. also Twitter, to spread false stories to politically naïve and less informed Americans, with such fake news as the absurdity that Hillary was connected to a child pornography ring out of a pizzeria. We don’t know whether the Russian interference put Trump over the top, although not in popular votes, but it didn’t hurt. Nor should a sovereign nation like ours tolerate interference in what should be a sacred annual rite of going to the polls. And we certainly should not have to put with a president who disrespects Canada’s Prime Minister Justin Trudeau while glorifying Vladimir Putin.

Bryan’s most powerful point is this: what is our chief executive doing sucking up to an adversarial country’s leader, suggesting, as many of us have heard, that Putin has something big against Trump which he is using for blackmail? The film is well researched, the most comprehensive look to date at Putin-gate compressed into just 112 minutes, with an impressive array of not only major political figures but also the scenic backgrounds of important meetings like the G20. If Trump is really committing high crimes and misdemeanors worthy of impeachment and removal, why is he still in office when Nixon was chased out, even by fellow Republicans, for doing not even one-quarter of these activities?