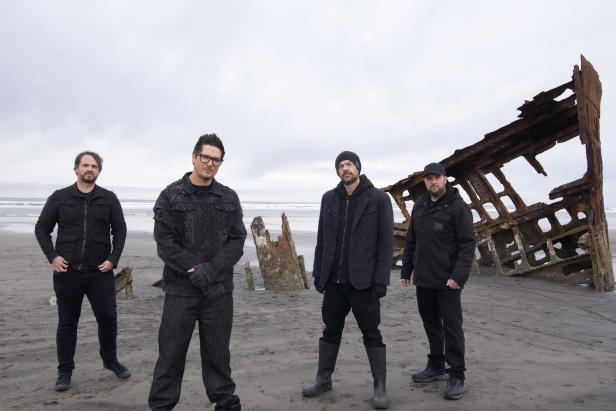 With the cable network in the midst of their signature month-long Halloween programing that’s titled Ghostober and dedicated to horror fan’s favorite season, the channel is taking viewers on a fun, spine-tingling journey across America. ‘Ghost Adventures’ is offering terrifying thrills to its fans with its four-part miniseries, ‘Graveyard of the Pacific,’ which is set to debut its third episode tomorrow, Saturday, October 20 at 9pmET/PT. The ‘Ghost Adventures’ crew is also preparing for its four-hour live investigation that’s set to premiere on Halloween night at 8pm ET/5 pm PT.

In the month-long four-part miniseries event, the ‘Ghost Adventures’ crew, including Zak Bagans, Aaron Goodwin, Billy Tolley and Jay Wasley head to the Graveyard of the Pacific. The treacherous nautical region within the Pacific Northwest is plagued by darkness on both land and sea, which has caused thousands of shipwrecks and claimed countless lives. The investigation takes the team to multiple haunted locations, including the underground tunnels that weave beneath the city of Astoria, Oregon, to the port city’s Norblad Hostel and the Fort Stevens Military Base outside of town, where dangerous entities are believed to haunt various sites. The investigation culminates at the North Head Lighthouse in Washington, which bore witness to some of the most tragic shipwrecks of this watery graveyard.

The ‘Ghost Adventures Live’ special will lead the team on the ultimate Halloween night event. The investigation will be held inside Bagans’ Las Vegas Haunted Museum. On the one-year anniversary of its opening, Bagans and the ‘Ghost Adventures’ crew, along with special guests, will investigate the museum that contains hundreds of haunted objects, some of which are so frightening and powerful they can’t even be touched. Through an on-location live video stream, viewers can monitor all of the ‘Ghost Adventures Live’ activity on Travel Channel’s Facebook Live platform and comment on any findings in real time. Fans can also follow Travel Channel’s other social media pages, including Twitter, Pinterest and Instagram, for exciting giveaways and to join a special pre-‘Ghost Adventures Live’ Q&A session with Bagans and the team.

The hit docuseries has created unforgettable paranormal moments, since it first launched 10 years ago, in October 2008. In honor of the anniversary, Bagans, Goodwin, Tolley, Wasley and the latest addition to the ‘Ghost Adventures’ crew, Dakota Laden, discussed their experiences together on the show during a panel at New York Comic Con earlier this month. Goodwin, Wasley and Laden also generously took the time to talk about their chilling investigations, both across America and the world, during an exclusive interview before the panel.

The exclusive conversation began with Goodwin revealing that the crew decided to launch ‘Graveyard of the Pacific’ after he “had been telling Zak for years that we should go to Astoria, and it never happened. Then all of a sudden, it did, and it was great.”

Wasley then chimed in with his support of investigating in Astoria by saying, “It’s such a perfect backdrop-it’s foggy and there are cliffs, so you feel like you’re in an H. P. Lovecraft short story. The town itself was built on stilts, because there were so much flooding. It also burned down, so they rebuilt it, but all of the underground structures are still there. We actually got to explore so much of the underground. That part of the country is so amazing and perfect for the special.” Goodwin and Laden added that they felt the underground was terrifying.

Once the ‘Ghost Adventures’ crew decided to film the first episode of ‘Graveyard of the Pacific’ in Astoria, they decided on which locations to truly investigate through doing research on the city, Goodwin shared. “Then Zak said, ‘You’re going here,’ so we were like, ‘Okay!’ I think it would have been cool if we also (investigated) some caves in the mountains.”

“I think we could have done four, four-park mini-series” in Astoria, Wasley admitted. “There are so many spots there. But we did a wide range of things. We did the underground, as well as a lighthouse, which was pretty amazing. Aaron and I got to go there. Just being in this lighthouse that’s right on the edge of these rocks, and knowing that thousands of ships crashed, and so many people died, there was pretty surreal.” He also noted that the crew visited “an old military base and a commander’s house. Each place is a little different, even if there’s the same energy and vibe. We tried to do something a little different for each episode, and show different takes for different spots in the area.”

Once the crew arrived in Astoria, they did a lot of research, including reading about the history on the area, like they do for every episode of ‘Ghost Adventures.’ Wasley explained that “Once we do our interviews and hear peoples’ stories, we hear about where the hot spots may be, and we’ll try to focus on those areas during the investigation.”

The crew doesn’t always plan where they’ll investigate once they arrive in the city where they’re investigating, “but we’ll have some ideas. Once we do start investigating, something may happen, and it takes us on a whole other path that we didn’t even think about, and we’ll just go with it. We don’t try to force anything,” Wasley also revealed. “We let the locations guide us, in a way.”

Laden added that “The only thing that’s ever planned is who we’re going to interview. From there, (the investigation) guides us.”

The crew also doesn’t fully plan on the type of equipment they’re going to use during their investigations. “Once we arrive at our locations, we just pick up our gear and go. If that gear doesn’t work, we’ll pick up different gear,” Goodwin admitted.

“Sometimes the specialty (gear) may be influenced by the location. Like when we were going to the lighthouse, we went shopping, and found an old nautical radio, which wasn’t even planned. We said, ‘Oh, we’re going to be investigating the lighthouse, so let’s try that out. It’s from the time period from when the ships crashed.’ So it was taking what we learned, and figuring out what piece of equipment would work best, and bring out the energy,” Wasley also shared.

“Sometimes the stories we hear involve equipment people have used, so then you guys will try that equipment, as well. So it’s always completely random,” Laden agreed.

Further speaking of the people who they interview once they arrives in the city they’re investigating, Wasley noted that “We usually have a few interviews lined up, but we don’t necessarily stop there. As we continue our investigation, we’ll maybe decide to talk to a few more people, who have had experiences. The people we interview may say, ‘Oh yes, Bob up the road also had an experience,’ so we’ll run to Bob’s house and film with him. We won’t let it just be the initial interviews we set up.

“Sometimes, we’ll even speak with people on the street. I remember one time in Astoria, this lady came up to us and started telling us these crazy stories about the underground. So we grabbed cameras and started filming our conversation with her,” Wasley also shared. “So our investigations never stop, even when we’re on a break. If something pops in, we’ll be like, ‘Oh, we can use this-it’s good information.'”

The conversation then turned to the ‘Ghost Adventures Live’ Halloween special, which came about because the crew has always wanted to broadcast a live episode. “So we started looking for a location, and we investigated Zak’s museum before. We did a series, ‘Deadly Possessions,’ there. We’ve also had so many of our own personal experiences there,” Wasley explained.

“The thing about the museum is that it keeps growing; (Zak’s) always adding new artifacts. Now that it’s been open to the public for a year, guests also have stories, and the tour guides also have experiences. People have even been taken out in ambulances at times. The stories keep coming in, so it feels like the perfect spot to focus all of our energy on, and really go through there with everything we’ve got, and see what happens,” he also noted.

“What’s cool about the Halloween live episode is that it’s one of the first times that we’ll be setting up a nerve center for everybody,” Wasley further shared. “So on Halloween night, viewers can go to Travel Channel’s Facebook page, and (the network is) going to be livestreaming about 30 static cameras there. So people can watch what we’re doing on the show on TV, and also watch the behind-the-scenes on Facebook Live.

“Viewers can also tweet to us during the broadcast. There will be people on site (at the museum) who will be going through those tweets while we’re investigating. The viewers are going to be our extra eyes and ears, so it’s going to be amazing to see what they find, as well,” he added.

With this month marking the tenth anniversary of ‘Ghost Adventures’ premiering on the Travel Channel, the investigators further expressed their appreciation to their fans for continuously supporting them, especially through sharing their thoughts, feelings and experiences on social media. “Reading the support of the fans is amazing. Seeing that they love the show, and keep supporting it, is amazing. We’re going to keep doing these investigations, regardless, but to have that support pushes us to go even further,” Wasley also explained.

Further speaking of the tenth anniversary, Goodwin cheerfully joked that appearing on the show “has been a nightmare, but an amazing nightmare, and that’s a good thing! We’re still learning as we go along.”

“We’ve been through so much,” Wasley also chimed in. “There’s no turning back now, as we’ve come so far. We want to keep pushing and going. I think we’ve evolved and gotten better over the years, and have able to fine-tune our approach to things. I think the team is better now than it’s ever been, and the evidence shows that.”

Goodwin added that he’s content with the fact that there’s such a small crew that works on the production of the show while they’re investigating the locations. “It’s just us, so we don’t have to worry about anyone else…We’re such a close and small team that if something happens, we can quickly look around at each other, and determine whether or not it was us.”

“I think having people you can trust, and be such close friends that you feel like brothers, is really helpful. We go into dark situations, so we know that we have to watch each other’s backs, and make sure that if something’s going down, we don’t get too hurt. Just knowing that we’re at the locations with people who all support each other helps with all of our energies,” Wasley added. “I think the mix of our energies brings out a lot of the evidence.”