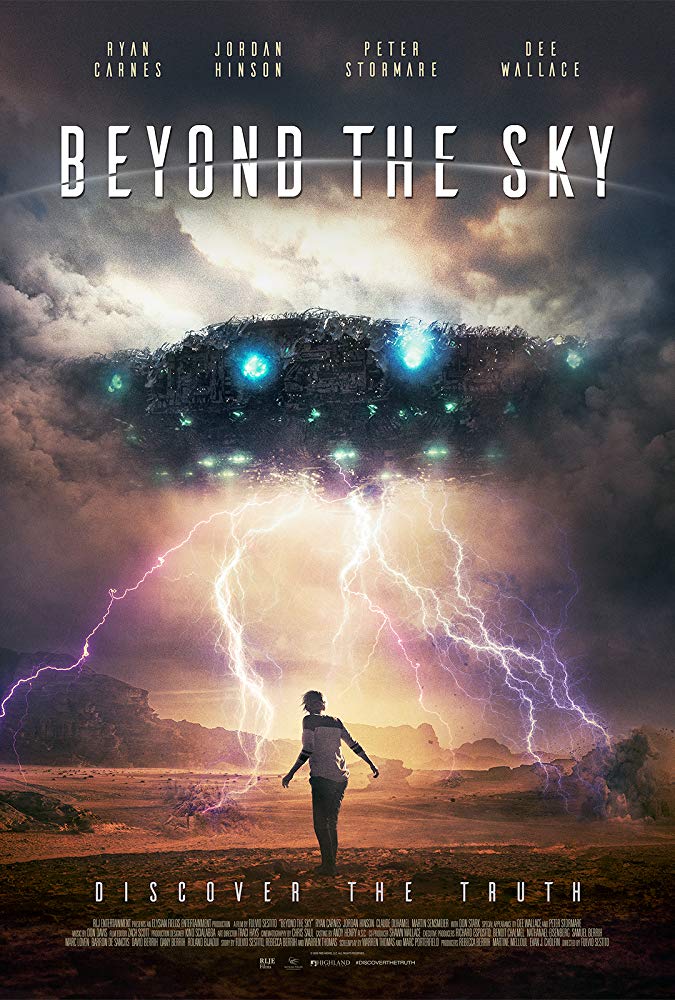 The poster for director Fulvio Sestito’s sci-fi thriller, ‘Beyond the Sky,’ which stars Ryan Carnes.

Uncovering and contending with the truth that humanity may not be alone in the universe is a terrifying experience for many people. That’s certainly the case for actor Ryan Carnes’ protagonist in the new thriller, ‘Beyond the Sky.’ The character’s terrifying journey is chronicled in the sci-fi movie, which RLJE Films will distribute today on DVD and Blu-ray.

In celebration of ‘Beyond the Sky’s home release, Shockya is offering two lucky winners a DVD of the drama. To enter, email, us at ShockyaGiveaway@aol.com. Let us know that you’re entering to win the ‘Beyond the Sky.’ DVD giveaway in the email’s subject line and message. You have until next Tuesday, November 13 to enter, and you can enter the contest once daily. On Tuesday, November 13, we’ll pick the winners at random, and notify them through email. Good luck!

‘Beyond the Sky’ is based on a story by Fulvio Sestito, Rebecca Berrih and Warren Thomas (‘Tell Me How I Die’). The movie’s script was written by Thomas and Marc Porterfield (‘Fear the Walking Dead: Flight 462′). Sestito made his directorial debut with the film, which, in addition to Carnes, also stars Jordan Hinson (‘Eureka’), Martin Sensmeier (‘The Magnificent Seven’), Don Stark (‘That 70’s Show’), Peter Stormare (‘Fargo’) and Dee Wallace (‘E.T.’).

The following synopsis for ‘Beyond the Sky’ has been unveiled:

Chris Norton (Carnes) has been hearing about alien abductions his entire life but, in his gut, he knows they are not real. Setting out to disprove the alien abduction phenomenon once and for all, he attends a UFO convention to meet alleged abductees and reveal the truth behind their experiences. It is only when he meets Emily, who claims to have been abducted every seven years on her birthday, that Chris realizes there may be more to these claims than meets the eye. With Emily’s 28th birthday only days away, Chris helps her to uncover the truth as they come face to face with the reality that we are not alone.