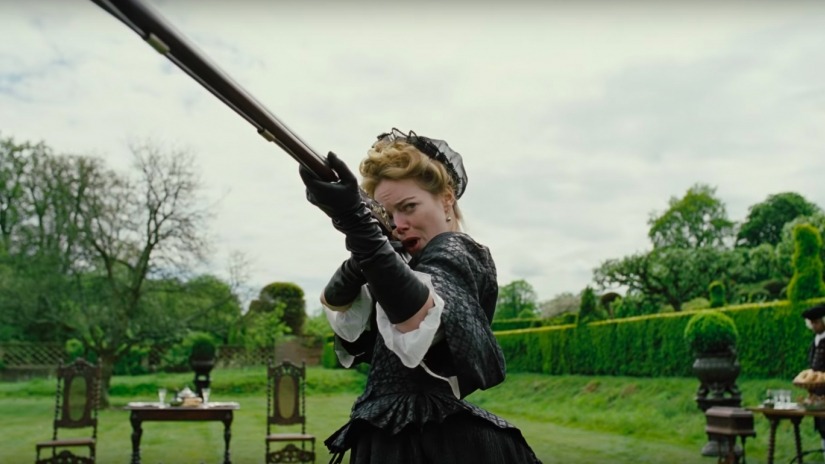 During the last few frames in The Favourite we are introduced to some fifty young rabbits, born at the royal British palace in 1714. What do these creatures have to do with the state-of-affairs in the early part of the sixteenth-century at Great Britain? It turns out: quite a lot. Queen Anne (1665-1714) ruled England, Ireland and Scotland from 1702 through 1714. Unfortunately Anne had a certain physical problem and could not produce an heir to the throne, but not for lack of trying. Poor Anne was pregnant seventeen times, and after six miscarriages, five still-births and six live-births she produced Prince William, the Duke of Gloucester (1689-1700). Little William survived infancy and lived eleven years but died shortly after his birthday from a strep throat infection. What is a queen do? Anne acquired seventeen bunnies and kept them in her lavish bedroom for many years, calling them “my babies”. Sounds a little crazy? Yes it does! Enter Lady Sarah Churchill (1660-1744), Duchess of Marlborough, the queen’s intimate friend, political adviser and decision maker from 1702 through 1711, at which time she and her husband, John Churchill, were banished from the court in particular and England in general. Another character that came to play in the royal palace was Abigail Masham (1670-1734), who was looking for employment through connection with her cousin Lady Churchill, but stayed in the palace from 1704 to 1714.

This is quite a story which director Yorgos Lanthimos translated into a juicy tale of The Favourite. We are introduced to Queen Anne (Olivia Colman), who is weak emotionally and physically, inflicted with skin sores and inability to walk, after her husband’s death in 1708; Lady Sarah Churchill (Rachel Weisz) who is a controlling person and hungry for political power; and Abigail Hill (Emma Stone), later known as Baroness Masham, a sweet and gentle creature at first sight, but a manipulative person who will become the queen’s confidant, lover, and the Keeper of The Privy Purse in 1711. During the next one hundred and twenty minutes this amusing trio will perform a comic power-play unseen in recent historic costume dramas.

Men have a limited role in The Favourite and are used by these women to acquire power and influence in the royal court, via arranged marriages. They are dressed in big wigs, lots of makeup, mascara, and high-heeled shoes, courtesy of Château de Versailles . They parade gingerly through the great halls and attend government’s sessions in Parliament while planning their next political move. Specifically we are introduced to Samuel Masham (Joe Alwyn), Abigail’s husband by an arranged marriage; and John Churchill (Mark Gatiss) the Duke of Marlborough, and Sarah’s husband/conspirator.

Acting is great in The Favourite. Emma Stone gives us Baroness Masham, who goes through a gradual transformation from an impoverished aristocrat to confidant of the queen. She will stop at nothing to get where she wants to be, pushing her cousin Sarah aside and marrying a royal court appointee, Samuel Masham, to gain more influence, even giving sexual companionship to Queen Anne any time during the day or night. In other words she is a “Lady-on-Call, 24/7”. Rachel Weisz plays Duchess Sarah Churchill with all the power, sarcasm and conviction that come with her influential position. Olivia Colman presents an English queen, broken in body and spirit after the deaths of seventeen children. She is unable to walk and gets carried in a wheelchair through the great palace halls. Her only pleasures are: binging on food, tending to her bunnies, and having the female sexual companionship of Lady Sarah and Baroness Abigail Masham. Good supporting performances are provided by Joe Alwyn as Samuel Masham, a pretty boy, who is not very serviceable in bed; and Mark Gatiss as John Churchill, the Duke of Marlborough, who spends most of his time fighting foreign wars.

Costumes by Sandy Power are first rate, ditto for makeup and hair done by Beverley Binda. Director of Cinematography Curtis Graham made a deliberate decision to film The Favourite using natural lighting by day, and candle lights during the night, which gives this creation a realistic look and feel.

The Favourite was shot in Hatfield House (1611), located in the Great Park on the eastern side of Hatfield, Hertfordshire, England. The house has beautiful sculptured gardens, covering forty-two acres of land, and was previously used in films such as: Orlando (1992); Shakespeare in Love (1998); The New World (2005); and Elizabeth: The Golden Age (2007). This shooting location shows a grand palace, inhabited by small-minded people, competing for power and influence.