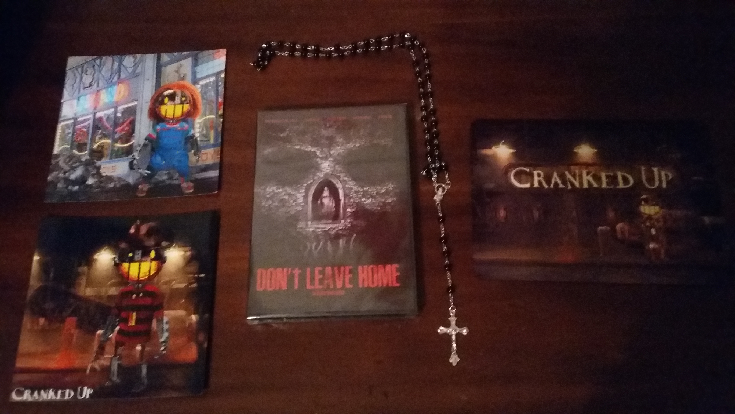 In honor of the launch of Good Deeds Entertainment’s genre-focused label, Cranked Up Films, as well as the DVD release of its first movie, ‘Don’t Leave Home,’ the company has sent ShockYa a terror gift.

Genre audiences are constantly searching for unique movies, and they’re now set to receive high-concept content that spans the horror, thriller and sci-fi sphere with the unveiling of Cranked Up Films. In honor of the launch of Good Deeds Entertainment’s genre-focused label, as well as the home release of its first movie, ‘Don’t Leave Home,’ the company has shipped us a terror gift.

The promo package introduces Crank, the robotic prankster that’s representing Cranked Up Films, to genre fans. The gift includes a copy of the horror thriller’s DVD, as well as mouse pads that feature Crank, drawings of the mascot dressed as Freddy Krueger and Chucky, and black glass rosary beads.

‘Don’t Leave Home’ is now available on DVD, after it was initially released in theaters and On Demand on September 14. The mystery drama was written and directed by Michael Tully, and stars Anna Margaret Hollyman (‘Sleeping with Other People’), Helena Bereen (‘Hunger’) and Lalor Roddy (‘Grabber’). The movie follows its protagonist as his investigation into the origin of a myth leads him to the eerie estate of a reclusive painter in Ireland.