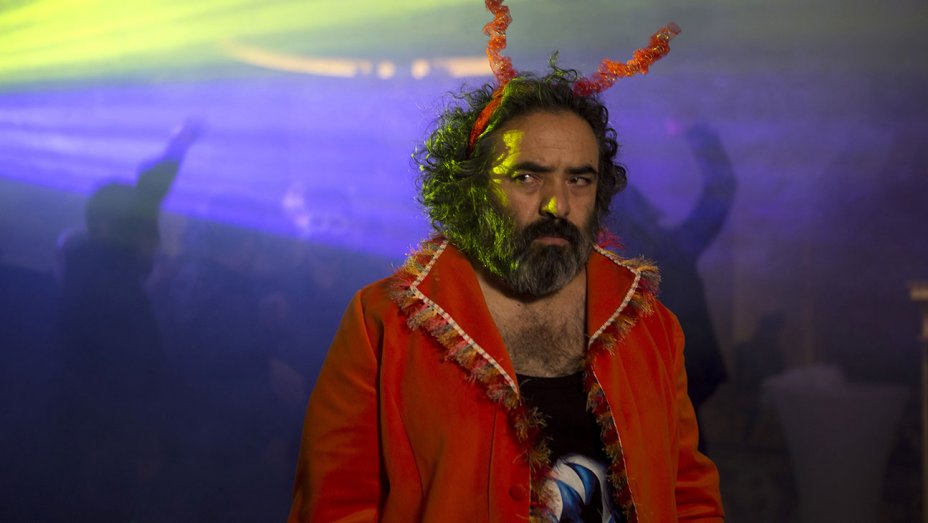 How do you like your Iranian movies? Do you favor meditative ones in the Ingmar Bergman style with a focus on the regrets of old age? Then Bahman Farmanara’s “Tale of the Sea” is your glass of sharbat. If instead you prefer absurdist dark comedy, Coen Brothers’ fashion? Then go for “Pig.” “Pig,” or “Khook” as the picture is known in Farsi, is a hallucinatory look at the high-end folks of Tehran, people who visit museums that show modern art and those whom Trump supporters would consider elitist. These are the well-to-do, BMW-owning artists, in this case represented by Hasan Kasmai (Hasan Majuni), a filmmaker who was blacklisted by the government. People in the know about global politics will pick up that Kasmai stands in for the real-life Jafar Panahi, a filmmaker who was unable to get a job because the politicians did not like his alleged propaganda against the government and who in 2011 smuggled a video out to the Cannes Festival by hiding the flash drive inside a cake.

Writer-director Mani Haghighi, whose “Men at Work” is an allegorical take on four middle-aged men on a ski trip, continues his wont to hide political commentary in a similar allegorical form, this time gives us “Pig,” a barb against the narcissism of artists, a trait that we in the U.S. know well given the current administration in the White House.

To get his message across, Haghighi employs the darkly comic theme of murder, wherein a killer decapitates artists before or after cutting off their heads. One filmmaker, the blacklisted Hasan Kasmai, feels slighted that he still keeps his head, wondering whether he is really in the top tier of his profession if he is being ignored by the murderer. Perhaps Haghighi is saying that some high-up officials are themselves being headless, persecuting those with whom they disagree.

“Pig” can be considered a horror film only as a stretch. When we see a few heads on the curbside and in the morgue with missing torsos, we are not in the company of filmmakers like Wes Craven and Rob Zombie who give their largely teen base the blood and guts that they eagerly lap up. When Hasan, the film’s principal subject, is not lamenting the injunction on his film making, using his time to shoot commercials, he is having an affair with leading lady Shiva (Leila Hatami). But Shiva, tired of being without employment because of the ban on her lover and director’s art, goes over to filmmaker Saidi (Ali Mosoffa) to Hasan’s displeasure.

Still, Hasan is pursued, even stalked for roles in movies yet to come, by Annie (Parinaz Izadyar). At the same time Hasan is himself babied by his rifle-toting mother, who will play a major role toward the story’s conclusion. Hip audience members will recall Chekhov’s insight that a gun shown in Act I will be used in Act III.

Among the visual candy on hand is an extended insecticide commercial, the all-female crew of bugs dressed in red with yellow boots, ultimately to be killed off by a huge, misty cloud. A dig at social media, in this case Instagram (Iran does not allow Facebook), sets Hasan up as the murderer by capturing him in scenes that could lead to his prosecution. Despite the thematic importance of this film, Hasan Majuni in the lead role becomes tiresome with a half hour to go. He is unlikable; an obese, temper-tantrum baby wearing silly T-shirts including one advertising Black Sabbath, an English rock group named after Mario Bava’s 1963 film of the same name.

There’s an elephant in the room. We in the U.S., told repeatedly that Iran is an authoritarian state that denies freedom to women and would not tolerate a movie critical of its repressive laws, may be surprised to note that men and women who are not related are seen chatting freely, driving cars, and observing so-called corrupt abstract art which was banned by totalitarian governments like Germany in the thirties and the Soviet Union under communism.

“Pig” is among the films exhibited beginning Jan. 10, 2019 in New York, enjoying the first Iranian Festival contributions this year. Shot on location in Tehran with sharp images by Mahmoud Kalari, the picture is in Farsi with English subtitles.