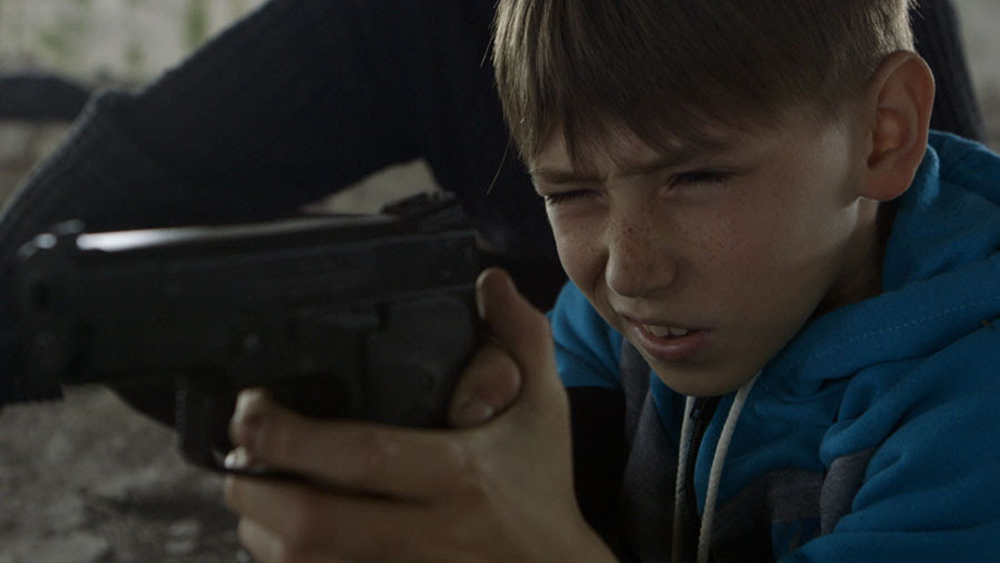 Oleg Afanasyev is a cute ten-year-old boy living in what our President would call a s…hole. There is this village in Ukraine of Hnutove, which has a population of 700, it’s just empty space with nothing growing and sporting no particular buildings, and worst of all it’s a short distance from the gunfire and mines and missiles set up by agents of the so-called Donetsky People’s Republic. Or maybe the Ukranian army is responsible. Ukraine has been at war with Russian separatists in their country who are backed by Putin in Russia, a miserable fight with cease fires that are routinely ignored. However, there’s a fairy story happening there. Young Oleg and his beloved grandmother Alexandra Ryabichkina were scooped up by Simon Lereng Wilmont, who directs a documentary called “The Final Barking of Dogs” and taken to New York where I had the pleasure of listening to them discuss their roles in the making of the film.

We in the audience may have expected both Ukranians to say that they love New York, that they love America, and they can’t wait to file for asylum because of their anxiety-ridden lives on the battlefield. But no, both said that New York City is “nice” but they want to go home. Grandma is specific: “We are part of the place, part of the land.” There’s no second-guessing people. They love their land and wouldn’t trade it for a secure for life in New York, where they could presumably fit in with either the Ukranian section in Manhattan’s East Village or the Russian sector in Brooklyn’s Brighton Beach. Surprisingly their talk is so apolitical that we do not know even whether they are ethnically Russian or full-scale Ukranian. (For more info on the war, check here:https://en.wikipedia.org/wiki/Russian_military_intervention_in_Ukraine_(2014%E2%80%93present).

Simon Lereng Wilmont, in his debut as sole director of a full-length movie, watches over Oleg and his grandmother as would a fly on the wall, apparently succeeding in coaxing them to behave normally and not to look at the camera. Little Oleg has pillow fights with his cousin Yarik, heartbroken when his pal leaves a for safer haven, but overjoyed when his cousin returns. They have an older friend Kostya, who acts like a big brother to them, showing Oleg how to hold a pistol and fire at bottles—though Oleg winds up with a fairly deep cut on his leg from a ricocheted bullet and is calmly and lovingly censured by his grandmother for shooting and killing a frog, making him promise never to that again.

This is the kind of documentary that happily is not the kind with dozens of talking heads. Nobody is interviewed. The three or four people do behave as though the director-cinematographer is not around, though we wonder how much landed on the cutting room floor during the year and a half that the movie was shot. If anything, Oleg is often curious about the waging of war, examining a mine, though carelessly zipping around the neighborhood without a thought that he could be blown up in an instant. This documentary landed on the Oscar short list for best doc where it will compete with the likes of “Won’t You Be My Neighbor,” “Free Solo,” and “RBG.”