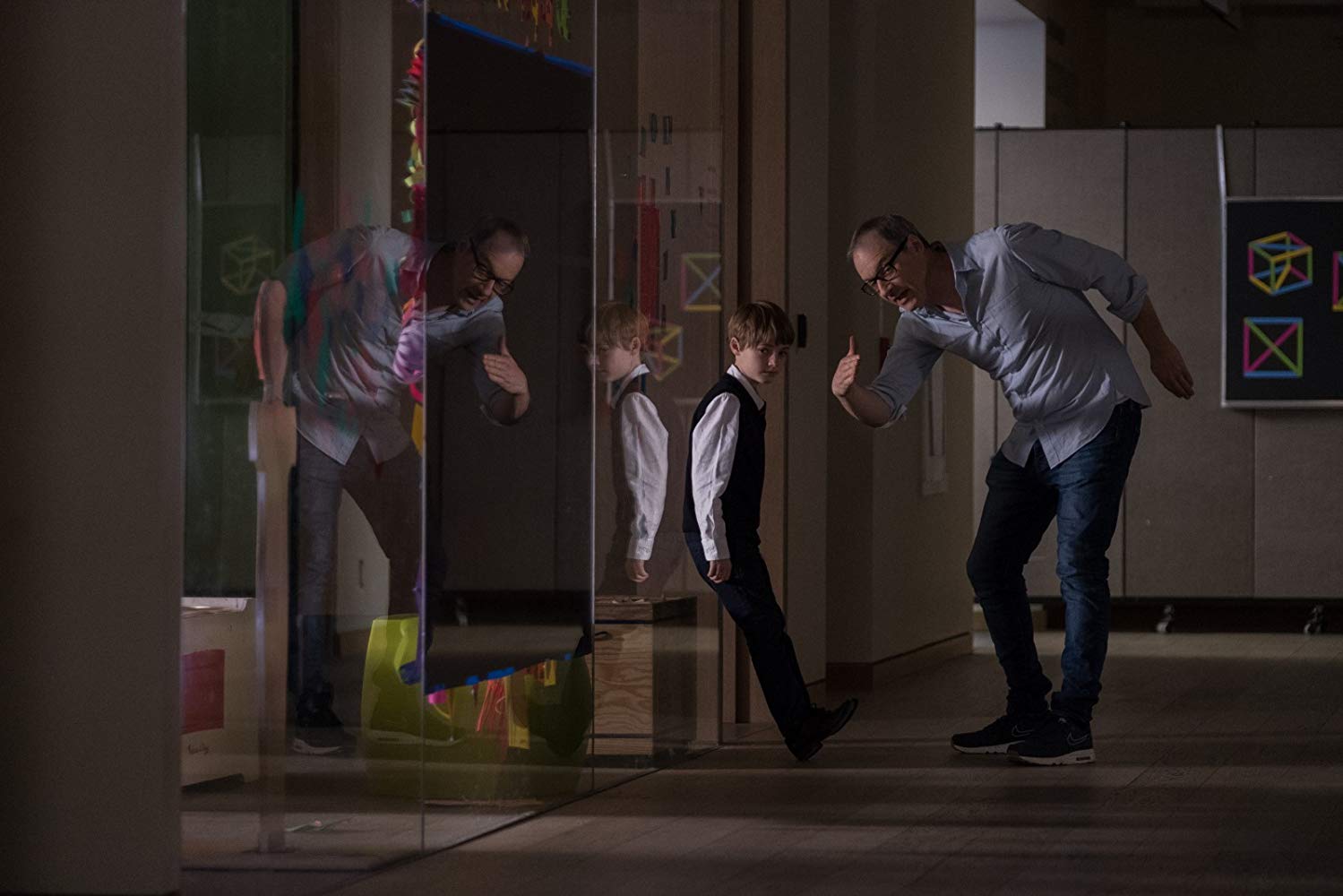 (L-R): Actor Jackson Robert Scott and director Nicholas McCarthy on the set of the horror thriller, ‘The Prodigy.’

Even the most fantastical stories are often based in a grippingly realistic emotional reality. That’s certainly the case for director Nicholas McCarthy’s new movie, ‘The Prodigy,’ which was written by Jeff Buhler. The drama marks the helmer’s third entry in the horror genre, following his celebrated feature directorial debut, 2012’s ‘The Pact,’ as well as 2014’s ‘At the Devil’s Door.’

Like McCarthy’s previous two films, ‘The Prodigy,’ which Orion Pictures released in theaters today, tells an emotionally charged story about the powerful effects of intense situations and relationships. Taking a cue from some of his favorite horror movies, including ‘The Exorcist’ and ‘Rosemary’s Baby,’ the filmmaker created a thrilling tale about the love between a mother and her troubled child. But one vital element that helps make the director’s modern thriller so unique is the fact that it also includes strong male characters who question and test the strong female protagonist, while they also try to support her.

‘The Prodigy’ follows Sarah Blume (Taylor Schilling), a mother whose young son Miles’ (Jackson Robert Scott, ‘It’) disturbing behavior signals that an evil, possibly supernatural, force has overtaken him. Fearing for her family’s safety, Sarah must choose between her maternal instinct to love and protect Miles and a desperate need to investigate what – or who – is causing his dark turn. While Sarah’s husband, John (Peter Mooney), believes that their young son is just contending with emotional and behavioral developmental issues that can be treated by doctors, she believes the answers are in the past.

Against her husband’s wishes, Sarah decides to seek help from Arthur Jacobson (Colm Feore), a psychologist who studies reincarnation. He immediately determines that Miles actually has the soul of another person trapped in his body, and that if they can figure out what the soul wants, they can get rid of it. While Dr. Jacobson is determined to help Miles, the Blume family’s troubles continue, and the line between perception and reality becomes frighteningly blurred.

McCarthy generously took the time recently to talk about directing ‘The Prodigy’ during an exclusive phone interview. Among other things, the filmmaker discussed that he was immediately drawn to helm the horror movie after the first time he read the script, because it started as a familiar evil kid story, but then became a little bit more twisted and darker than he expected. As a parent himself, McCarthy also pondered how people figure out how to separate their love for their child who has sinister intentions with their concern for the welfare of the people around their child.

The conversation began with McCarthy explaining why he was interested in directing ‘The Prodigy.’ “I had done a couple of small horror films-‘The Pact‘ and ‘At the Devil’s Door.’ The producer of ‘The Prodigy’ had been a fan of them, and was trying to find a project for me,” he revealed.

“Jeff Buhler had written the script for this movie, and sent it to me. I absolutely fell in love with it the first time I read it, because it started as a familiar evil kid story. But it became a little bit more twisted and darker than I expected,” McCarthy admitted. “Then Jeff took it in a direction I did not expect. During that first read of the script, I felt like I wanted to see this movie with an audience.”

After the filmmaker’s first reading of the screenplay, it took four years to finish making ‘The Prodigy.’ “But it was all because of that first read of the script that made me stay committed to directing it,” he emphasized. Overall, McCarthy, who’s a self-admitted horror fanatic, added that all three of the movies that he has helmed have been in the horror genre, because he finds them to be creatively interesting.

The filmmaker then delved into explaining what the casting process was like for his new drama. “Once we got the greenlight to make the movie, we had the two most important roles to cast-Sarah, who’s the mother, and Miles, her son. We talked a lot about people who could play Sarah, but I also felt that Taylor Schilling would be amazing. When she responded to the script, we sat down together, and that’s when we took the measurement of whether she’d be right for the part or not. It’s not just about her performing style; it’s also about her vibe,” especially with whichever actor was cast as her character’s son, he explained.

“I instantly saw that Taylor has an intensity to her. She has this drive that extends into her acting. Everything had to be real for her, and I picked that up while she was talking about the role, which I became excited about,” McCarthy divulged.

“But then the challenge was finding who we were going to pair her with, especially who’s going to play her son,” the director admitted. “When you cast people, you look for this spark that not only fills the parameters of the role, but also creates something that you never would have imagined. You need someone who will bring something special that’s completely different than what’s on the page,” he also explained.

“When I first saw Jackson Robert Scott, it was on tape. We saw a lot of kids, so we had the ones who we were even mildly interested in do scenes, and then we would give them a bit of direction, and we’d see what they’d do with that,” McCarthy further explained. “Jackson immediately had something that was special. But it wasn’t until we actually met face-to-face, like what had happened with Taylor, that we could feel that there was something magnetic about him.”

The filmmaker added that when Schilling and Scott first met, “it was a really phenomenal experience for me. I had these incredible experiences with both of them on their own, but then seeing them bond as mother and son was pretty wild.”

Once Scott was cast as Miles, McCarthy spoke to the young actor as though he would be playing “three different characters. So he behaved in three different ways for each of them. There was Miles, the sweet little boy who was born to his mother, and then there was this other person.” Once Miles started to show signs of being possessed, “Jackson would do something different with his body, and would become that other person.”

The helmer also explained that “There was a third version of this, which was like a twilight kind of character between” Miles and the person who was taking possession of his body. “For that, I would take to Jack about slowing down his breathing and not blinking, and just focusing his eyes. He would begin to call that the comfy stare, because his eyes would be comfortable, since he wasn’t necessarily looking at anything.”

For some scenes, “we would have Jack play one character. I would then tell him, ‘Why not at the end, you say this line of dialogue, and do it as the twilight version, with the comfy stare,’ and he would do that. I would watch hims subtly shift and change his body from one persona to another. That’s just one example of what he was able to do physically as that character,” McCarthy also shared.

In addition to working with Scott on the physicality for his portrayal of Miles, the filmmaker also had a lot of rehearsal time with the performer and his co-stars. While McCarthy and the actors worked on the scenes from the script, “I would also put Taylor and Jackson together to go on trips. I went with them to the aquarium one day, for example. I hung out with them for a little while, but I then let them be together on their own,” he noted.

“I knew they were going to have to be mother and son on screen, so they would have to know each other off screen, too. So by the time we began shooting, they had spent enough time together that they developed a familiarity with each other,” the director revealed. “Taylor’s really the one who has the most emotionally intense scenes in the film, so it was a blast to work on those moments with her. Some of those scenes were difficult, because there’s serious sh*t that goes down with her,” he also admitted. “But Taylor was always right there with it,” and wasn’t afraid to embrace that experience.

**SPOILER ALERT** “There’s a scene in a hospital that we did with Taylor and Jack, which I’ll never forget shooting,” McCarthy divulged. “I told Taylor to push Miles away when she’s being hugged by him. That was just so brutal to watch. When we did it in rehearsal, everyone in the crew who was gathered around and watching them gasped at the same time,” the filmmaker revealed. “It wasn’t a moment of violence; it was a moment of this mother rejecting her child, which is a different type of horror movie; it’s the evil kid subgenre, which is what our story’s set in.” **END SPOILER ALERT**

Further speaking of the evil kid subgenre, McCarthy noted that for him, it “goes back to (director Mervyn LeRoy’s 1956 crime horror film,) ‘The Bad Seed.’ That movie’s about a mother and child…and is a really powerful and subversive movie. The story in the film poses the question of, what would you do if your kid could kill, or is just overall evil? What would you do to stop him or her? That’s an amazing kind of question to ask an audience.”

The helmer added that “When Taylor and I were making our film, we would talk about it as though it was a biblical story, because the audience would ask this moral question of what they would do” if their child was like Miles. “Taylor doesn’t have kids, so this role helped her test the waters of what it would be like to be a parent. That was hilarious, because the movie’s so twisted and bizarre. But that was the kind of journey we were on.”

McCarthy further considered the thought of, “How do you figure out how to separate your love for your child with your concern for the welfare of the people around your child? As a parent myself, that was really powerful for me to think about.”