Finding the right amount of humor and glam to infuse into any show is highly important for any performer who wishes to leave a mark on the entertainment industry. Trinity the Tuck, who originally gained fame for competing on the ninth season of ‘RuPaul’s Drag Race,’ is back in the spotlight as one of the winners on the recently concluded fourth season of ‘RuPaul’s Drag Race All Stars.’ The season culminated this weekend with her being co-crowned the champion with one of her biggest competitors, Monét X Change, which marks the first time in the history of the show’s run that two queens have been crowned.

The win on the VH1 reality competition is also noteworthy, because it’s coinciding with the release of the videos for Trinity’s new singles, ‘The Face, The Body’ and ‘I Call Shade,’ as well as her debut album, ‘Plastic.’ The reality show winner and singer is effortlessly mixing comedy and allure on both the series and in her music.

Trinity’s playfulness and charm are on full display in the out-of-this-world, cerebral concept of her first music video, which brings ‘The Face, The Body’ to life. The epic seven-minute long video showcases Trinity as an extraterritorial goddess who sends an alien clone down to Earth to seduce the world.

The concept for the ‘The Face, The Body’ video came from Trinity’s idea of showing the story of the drag queen on screen. During an interview with ET Online, she explained, “It’s about this higher being creating this clone to send to Earth, and the clone becomes the perfect woman and takes over with sex…The higher being is who I am, which is Ryan (Trinity’s real name is Ryan Taylor), and I create this perfect woman and in the night life and in entertainment period, we just take it over…So, it’s kind of metaphoric for that.”

The monumental seven-and-a-half-minute long video for ‘I Call Shade,’ meanwhile, features Trinity as she’s ready to set out to prove her haters wrong. The narrative follows as she confesses to her diary how tired she is of being bullied in her fictional high school by her fellow ‘Drag Race’ sisters, including Blair St. Clair, Yuhua Hamasaki and Thorgy Thor. So Trinity powerfully proclaims, “I’m gonna take revenge…right after my chemistry class.”

During the rest of the video, Trinity plots to take each of the popular queens off their pedestals, and does so through revenge as blackmail and pushing them down the stairs. She then steps over the bodies of her foes as Peppermint, who also appears on the single’s vocals, urges her to go for the kill.

The videos for ‘The Face, The Body’ and ‘I Call Shade,’ which were written and directed by Tyler Stone, who also served as a producer with Stephen Riscica, and her recent win on ‘RuPaul’s Drag Race All Stars,’ shows that Trinity is ready to prove her haters wrong. For more information on Trinity, visit her Facebook, Twitter, Instagram and YouTube pages. 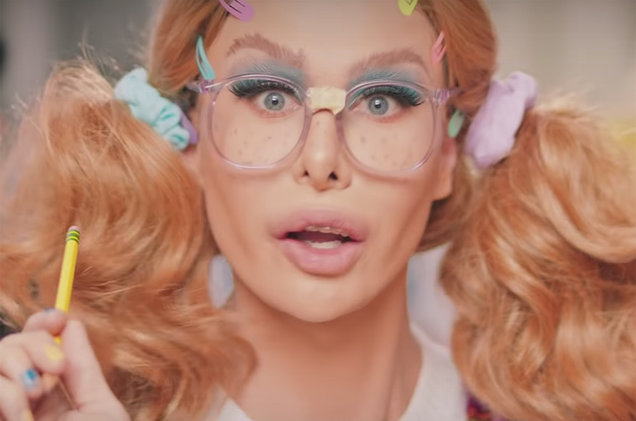 'RuPaul's Drag Race All Stars' season 4 co-winner, Trinity The Tuck, appears in the music video for her single, 'I Call Shade,' which eatures Peppermint.