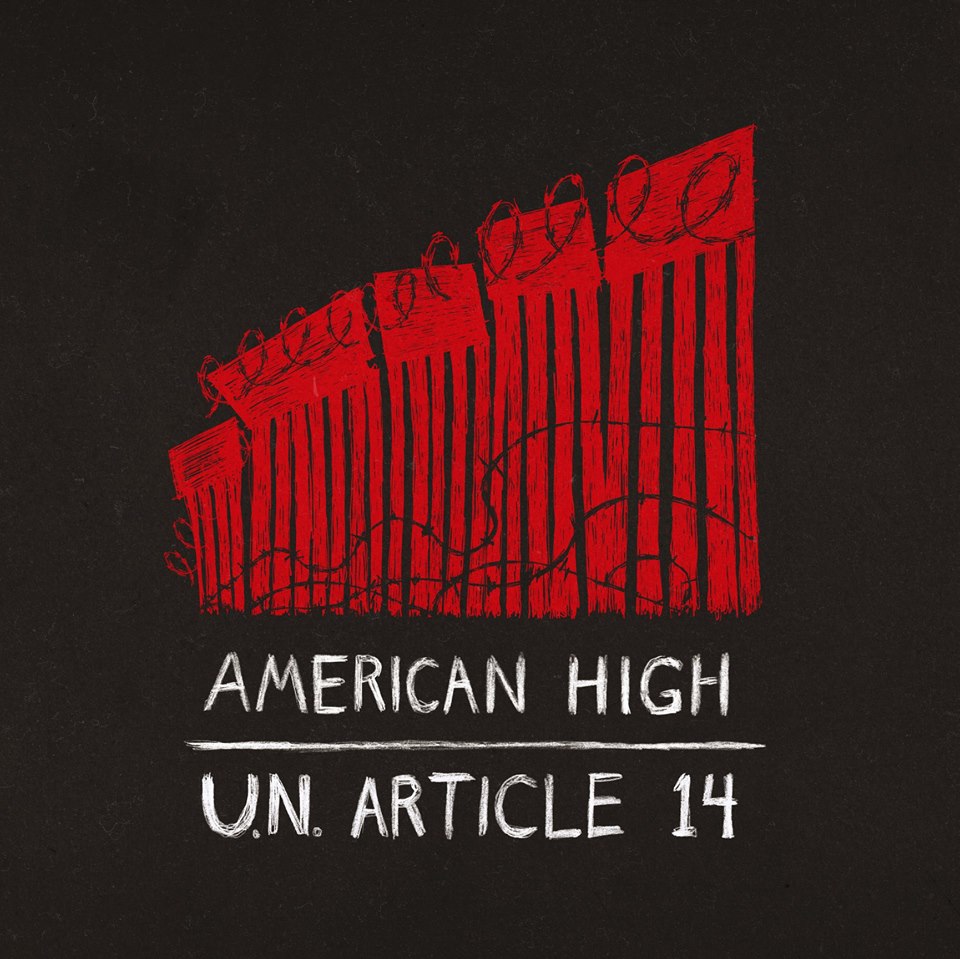 Album: ‘U.N. Article 14;’ Production: American High produced the record, which was recorded and mixed by Joe Johnson of Pus Cavern Studios in Sacramento

People around the world are born with certain humane rights that shouldn’t be taken away from them by anyone else, even, and especially, by their government. While many rock-n-roll bands are mainly motivated by the party lifestyle that has largely driven the genre since its inception, American High is one unique group that powerfully defies that stereotype. The Sacramento, California-based quartet has rightfully bypassed the clichéd, all-consuming celebratory lifestyle that has overtaken the genre to instead focus on the idea that no one has the authority to vote away other people’s natural rights. The band stunningly emphasizes that proclamation on its new eight-track indie-punk-alternative album, ‘U.N. Article 14.’

The members of American High immediately prove that they’re unique musicians, and truly committed to their mission of protecting all human rights, on ‘U.N. Article 14’s initial entry, ‘Second Sister.’ Driven by their signature uptempo rock guitar chords and vocals that are enthrallingly reminiscent of Tom Petty, the group’s frontman, Doug Terry, and his bandmates instantly revitalize the activism punk subgenre that has been made popular by such groups as the Ramones, Green Day and Blink-182.

‘Second Sister’ then delves into ‘U.N. Article 14’s intriguing sophomore song, ‘Cheye Calvo,’ which courageously explores the injustice of legally dubious police raids in the US. The LP’s second track is one of its most politically charged tunes, as it ponders the ongoing human rights situations across the world. Terry and his fellow musicians skillfully hide the intensity of the human rights violations behind the entry’s seemingly cheerful pop beat.

The narrative of the entry contemplates the controversial drug raid of the home of the title former Mayor of Berwyn Heights, Maryland during the summer of 2008. While a package of drugs was delivered to the mayor’s house, a SWAT team was there to intercept it, but Calvo was ultimately cleared of all charges. The lyrics grippingly highlight the fact that American High gives equal weight to all violates related to civil rights, regardless of which decade they took place in.

Another noteworthy song on American High’s new record is its fourth entry, ‘Fairfield, CA,’ which thrillingly highlights the influence that such rock-n-roll ’60s bands as The Beatles have contributed to the quartet’s signature sound. Terry fearlessly leads his group’s soul searching quest as he ponders who the girl from the tune’s title city is, and if they have a connection. The band enthrallingly takes a step back from its steadfast political and activist stance for a more upbeat and traditional message about the power of attraction, and ultimately, love.

‘Fairfield, CA’ then transitions into the album’s meaningful title track, which chronicles the story of a family or group of friends trying to escape the wall of Mexico. Terry’s exceptional lyrics offer a powerful insight into the disregard of human rights, and the heinous discrimination that some groups face for their diversity and distinct ways of life.

‘U.N. Article 14’ maintains its philosophical message with its penultimate entry, ‘Belly,’ which contemplates the harrowing struggle of being able to eat and survive in a difficult economy. The song also stunningly maintains American High’s signature tier pop production value, notably with its contagious acoustic rock guitar and nostalgic piano chords.

The quartet’s new LP ends with the memorable entry, ‘Test Pilot,’ which thrives on its ’90s-infused chord progressions. Comparable to the signature pop-punk activism power ballads of such popular and progressive bands as Green Day and Blink-182, the song promises to be one of American High’s greatest live performed pieces.

People around the world are granted certain humane rights that shouldn’t be taken away from them by anyone else, even, and especially, by their government leaders. While many rock-n-roll groups are mainly driven by the party lifestyle that has largely defined the genre since its inception, American High is one unique band that powerfully defies that archetype. The quartet has rightfully bypassed the stereotypical, all-consuming celebratory lifestyle that has overtaken the genre to instead focus on the idea that no one has the authority to vote away other people’s natural rights. The group stunningly emphasizes that proclamation throughout ‘U.N. Article 14,’ which is a stunning and revolutionary indie rock-punk alternative record that like the work of The Beatles, is sure to remain timeless and relevant to all generations.