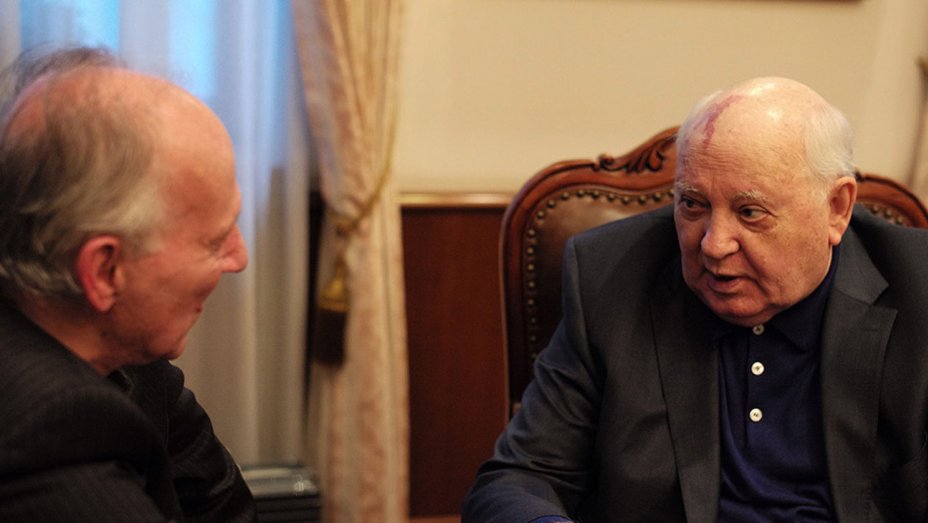 When Mikhail Gorbachev gave a talk during a visit in December 1988 with President Reagan, a member of the press asked whether he would consider running for President of the United States. “Thanks,” said the Soviet leader with a wide grin, “But I already have a job.” The exchange could be a humorous criticism of Ronald Reagan but was more likely motivated by Gorbachev’s charm. Even aside from Gorby’s wonderful personality, he would almost certainly be considered one of the one hundred major figures of the 20th Century.

There’s no doubt that Werner Herzog, perhaps the world’s most prolific documentarian, thinks highly of Mikhail Gorbachev. If they somehow met in 1944 with battles raging in Europe, they would presumably try to kill each other. Russia had no love for Germany at that time, perhaps because Hitler was responsible for killing some twenty million Soviets, mostly civilians. Some time after the war the two countries bonded, at least as friendly as are the U.S. and Vietnam today despite the hundreds of thousands, maybe millions of Vietnamese killed by 1975 largely with the aid of Dow Chemical. In fact Gorbachev and Herzog, representing the former Soviet Union and Germany respectively, seem like such buddies on the screen during the ninety-five minutes of the documentary “Meeting Gorbachev,” that you’d scarcely know that a great many people in Russia today probably consider Gorbachev, one of the towering figures of the last century, to be guilty of treason.

Werner Herzog, whose “Fitzcarraldo” about a man determined to build an opera house in the jungle, lies among a wealth of features, full length and shorts, on film and on TV. Announcing himself with a heavy Teutonic action that is unique enough to identify its owner, the 76-year-old Herzog sits across from the 87-year-old former Soviet leader whose principal source of identification at least in the U.S. is the birthmark on his mostly bald head. The three interviews are interspersed with a wealth of archival films, some never seen before in these parts, in both color and black and white. At this point in his long life, Gorbachev, pausing before answering each question perhaps to listen to the earphone-adapted voice of an interpreter, looks as though he has had his share of blinis as he appears relaxed in sports shirts and open jackets exuding fondness for his interviewer. As the film unwinds we learn that his accomplishments stagger the imagination, especially considering the Cold War that was raging between the U.S. and the Soviets from 1917 to 1991, with a temporary truce during World War 2. History will honor the subject for his ability to negotiate with President Reagan for a reduction of nuclear weapons; the pulling out of Eastern Europe with (to Herzog’s joy) the reunification of Germany; and the dissolution of the Soviet Union, which Gorbachev and Boris Yeltsin made no attempt to combat. In fact in a world in which major differences take decades or centuries to accomplish, these changes boggle the mind with their suddenness.

During a three years’ interval in the USSR, Yuri Andropov and Konstantin Chernenko meet their makers (not God, because Communists are atheists), and through bizarre Soviet arrangements Gorbachev is elevated to the post of General Secretary, the highest office in the vast land. Archival films hone in on George Shultz, secretary of state under Ronald Reagan; Horst Teltschik, who advised German Chancellor Helmut Kohl, the latter noted for directing German reunification; Margaret Thatcher, the reactionary British PM who opposed limiting nukes because they “deter war;” and Ronald Reagan, particularly during his meeting with Gorbachev in Iceland to deal with reducing the nasty weapon.

Looking back at a country now led by authoritarian, anti-Communist Vladimir Putin, we wonder whether all of Gorbachev’s reforms will be for naught given that both the Russian leader and the POTUS are leading their countries away from democratic reforms. Not everything in the movie is political. In a sentimental break, Gorbachev is seen shedding tears in memory of his departed wife Raisa, who died in 1999, twenty years ago, but still fondly in the former Soviet leader’s memory.

Herzog is a stunning interviewer, eliciting sustained responses to his questions, and the entire production staff should be complimented for its wealth of rarely seen archival films.