Anticipating a promising new start to a purported better future is a powerful motivator for many people to overlook their initial glaring doubts about the situation they find themselves in. That’s certainly the case for the married protagonists in the new psychological thriller, ‘The Intruder.’ The film is a powerfully gripping cautionary tale about the extreme measures people take in order to obtain and preserve their dream life, as they’re forced to contend with the threatening situations they inadvertently placed themselves in.

Sony Pictures’ genre label, Screen Gems, is set to release ‘The Intruder’ tomorrow in theaters. ‘The Intruder’ was written by David Loughery, and helmed by Deon Taylor. The director has made a name for himself by helming such genre movies as last year’s ‘Traffik,’ as well as ‘Supremacy‘ and ‘Chain Letter.’

‘The Intruder‘ follows Scott and Annie Russell (Michael Ealy and Meagan Good), who seemingly couldn’t be happier. He’s the top earner at a San Francisco marketing firm, while she writes magazine articles. While they’ve found success in their careers and marriage, Annie, however, also fantasizes about about buying a home far from the city where they can raise kids. So they begin searching for a new place to live, and find their dream home in Napa Valley. They decide to buy the estate which is called Foxglove, from the previous owner, empty-nest widower Charlie Peck (Dennis Quaid), who reveals that he’s planning to move to Florida to be closer to his daughter.

However, the Russells soon discover that Charlie isn’t necessarily as innocent as he initially appears. He’s still attached to the house, which he told them has been in his family for several generations, so he begins to show up and interfere in their daily lives. While Scott wants nothing to do with Charlie, Annie empathizes with him, and dismisses her husband’s suspicions as unfounded.

When Charlie’s erratic behavior ultimately turns to obsession, and develops unhealthy expectations about where things might lead with Annie, she soon realizes that her husband’s doubts about Foxglove’s previous occupant. So the young couple finally decides to fight back against Charlie together, but they find themselves caught up in a violent confrontation that threatens to destroy everything they hold dear.

Taylor generously took the time recently to talk about directing ‘The Intruder’ during an exclusive interview at New York City’s Gramercy Park Hotel. Among other things, the filmmaker discussed that he was drawn to helm the psychological thriller because he thought Loughery’s screenplay was an intense page-turner that pays homages to entries in the genre from the 1990s that rely on the characters’ relatable struggles and relationships. He also expressed his appreciation that the actors, particularly Quaid, Good and Ealy, all responded to their respective characters, and brought an intensity and sense of reality to their portrayals while working together.

The conversation began with Taylor explaining how he became involved in directing ‘The Intruder.’ He revealed that he “was sitting on my couch, and my phone rang. It was Mark Burg, who’s a friend of mine,” and also served as one of the executive producers on the drama. “I’m also a big fan of his work-he produced the ‘Saw’ franchise. So when he said, ‘I’ve got a great script for you,’ I asked him what it was. He told me about it and sent it to me.”

The helmer recalled that when he read Loughery’s screenplay, he thought it was a page-turner. The story “reminded me of the ’90s thrillers, like ‘Unlawful Entry.’ I love those types of films, so I flipped out over this script. It’s not something I would normally do, but I liked the simplistic writing. It’s about three people in a house, as Dennis’ character just kept coming back.”

As an independent filmmaker, Taylor feels that it’s important to be excited about the stories he brings to the screen. “I was really excited as I read this script, so I was determined to find the money to make this film. So I got the financing by raising a couple million dollars myself, and then we were on set, shooting the movie.”

After securing the financing for ‘The Intruder,’ the director pondered who he should cast in the drama. “When it came time to cast the role of Charlie Peck, I immediately thought of Dennis Quaid. Everyone said, ‘You can’t get Dennis Quaid! Come on back to Earth,'” he admitted.

“The next thing I know, he called me and said, ‘It’s Dennis Quaid. How are you, brother?’ I thought, oh my God, it’s Dennis Quaid! We hit it off, and he was amazing. It’s so funny how things work out; it was all luck,” the filmmaker admitted. He added that he felt the experience was also a blessing, because the Golden Globe-nominated actor also thanked him for thinking of him for the antagonist. “He told me, ‘I’ve always wanted to do something crazy like this. It’s just the right time now.’ He was just great in this role.”

Besides casting Quaid as the villain in ‘The Intruder,’ Taylor also cherished the opportunity to bring Good and Ealy on board as the Russells. He noted that “As an African-American filmmaker, I love multi-ethnic things. I think we live in a colorful world, so I wanted to make sure the film was colorful. But we never make any reference to race in the film. That was important to me, because I don’t think you need to say, ‘Look at that couple, they’re black,’ or ‘Look at that man, he’s white.’

“The movie is about realism; we live in a world where we all occupy this Earth. So when we were getting ready to make the film, I wanted to find a really cool black couple,” the helmer also revealed.

“Meagan’s been around for a long time, and is stunning and gorgeous, and so is Michael. I was trying to find people who are incredible actors who also have a fanbase,” Taylor admitted. “Meagan and Michael have been in a few movies that have made a couple hundred million dollars, they’ve never truly acted together extensively in a film,” despite both working on the ensemble comedy, ‘Think Like a Man,’ and its sequel, ‘Think Like a Man Too.’ “So I thought, this is great! I’m putting them together! When we also got Dennis, I thought it was something special.”

The filmmaker added that he thought Good did a great job of having Annie not immediately realize the type of person Charlie was. “The audience can think she’s crazy for not accepting that side of him, but she hasn’t seen it!…Charlie is two different people. Since Annie and Scott’s relationship is in a bad place, so Charlie comes in at the right time” to help them fix their problems. “She was already a nice person, and worked in an environment where she wants to help people. So her kindness is there for everyone to see.”

Since Annie is such a nurturing person, Charlie is easily able to manipulate her, Taylor also pointed out. “When you watch the film, you’ll see that every time (Charlie and Annie) are on screen together, he’s manipulating her. But when all three of them are on screen, Michael’s character is the aggressor to Charlie. So she’s seeing the situation through a difference lens. So (Scott) finally has to be like, ‘This guy’s crazy!’ Annie finally agrees and says, ‘I think he is crazy.'” The director added that he loved that dynamic between the three characters, because he thinks it’s a play on humanity, characters and people.

“I think the overall arcing message for the film, which is cool, is that through adversity, and when people fight together in a relationship, they can beat the evil,” Taylor also revealed. “So the couple becomes tighter by fighting together against this thing that’s driving them apart.”

The filmmaker then delved into what the process of collaborating with the actors was like once they were cast. “I’m very accessible. Everyone had thoughts and ideas, and we tried a lot of stuff together. Everyone loved the screenplay that David wrote, but we also added a few elements to it, like the humanity. I wanted to add that in there, to make sure the characters felt real,” he noted.

“I wanted Dennis to feel very disruptive. He’s very kind and nice to Meagan, but acts completely differently to Michael. Those little gestures are Dennis and I working together” to go back and forth between both sides of the character, Taylor shared.

The experience of working with Quaid, Good and Ealy on creating the action sequences for the mystery drama was also something the helmer cherished. “Dennis did all of his stunts, and Michael and Meagan also did all of their own fight sequences. One time, Dennis actually almost threw Michael over the rail, so Dennis had to catch Michael and bring him back over. Dennis also went through a door with a knife,” he admitted.

“We had stunt people for them, but once they got working, and we were in the environment, everyone was like, ‘Let’s just do it.’ Dennis was like, ‘Let’s go, I love it! Let’s make it authentic and real. We want to entertain people,’ and he was right,” Taylor further shared.

Since most of the story is set in the estate that the couple buys from Charlie, the filmmaker shot the thriller on location in a real property in Vancouver. “We searched hard to find a house. We couldn’t find one at first, so the driver of the van we were in was like, ‘Have you guys looked at haunted houses?’ I was like, ‘No!’ He was like, ‘Yes, I’ve got some haunted houses,’ so I said, ‘Okay, take us to the haunted houses.'”

“The first one we looked at was Foxglove. When we walked up to the house, I thought it was incredible, but so scary at the same time,” Taylor admitted. “When we walked in, (the movie’s cinematographer,) Daniel Pearl was like, ‘No, no, no! The hallways are too small! We’ll never be able to fit the camera.’ I said, ‘Man, let’s just look.’ We walked through, and I fell in love with the house. I thought it was a character that was creepy and beautiful at the same time, and fit right into the story. So we ended up figuring it out. We switched the cameras to Alexa Minis, so they were smaller, and we went in and shot. They delivered for us,” the director shared.

The filmmaker thinks ‘The Intruder’ will leave a lasting impression on audiences, as it not only incorporates the stunning production design and action sequences into the story, but also the strong relationships and dynamics between the characters. “There’s an over-arcing message that people have to be careful who they let into their house. Also, Scott wanted to make Annie happy, but he was unsure that he wanted to be there. So a lot of the pushback from him was about him not being completely sure that he wanted the house, besides the issue with Charlie. It was her saying that she liked, and really wanted, it,” he further explained.

The drama isn’t just a fun popcorn movie that allows audiences to shout back at the screen, as they try to warn the protagonists what’s truly going on, or question all of the characters’ actions. It’s also a thought-provoking, relatable real-life exploration into why people act the way they do, Taylor notes about the overall story. 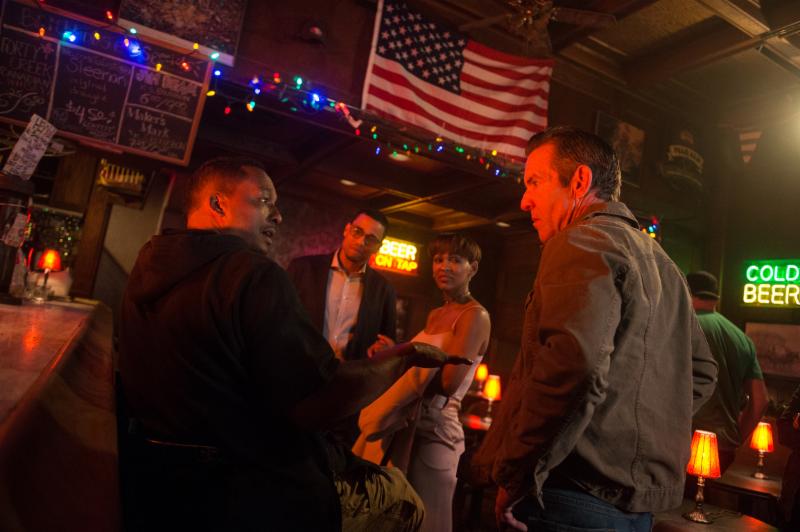