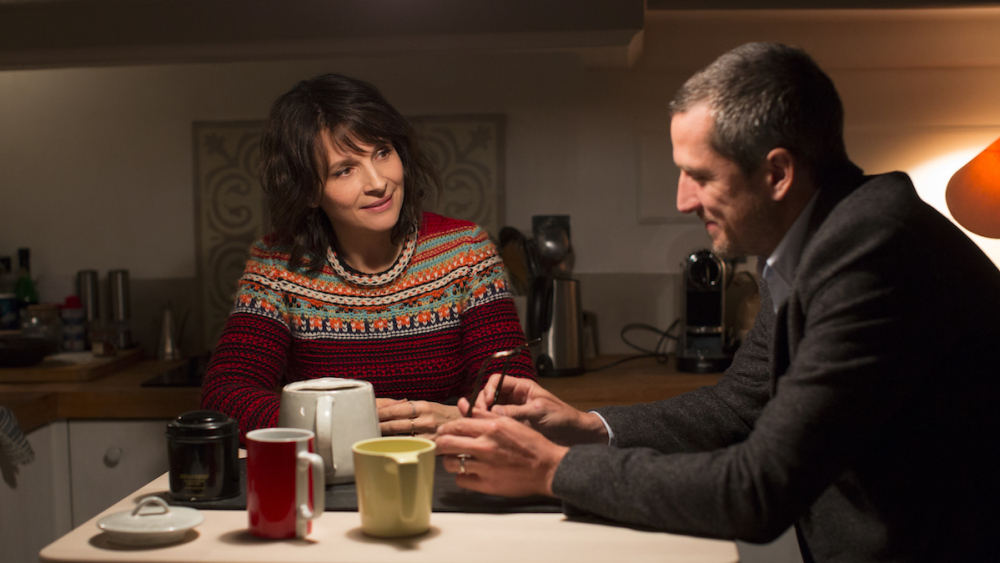 Some years ago while taking French lessons at Berlitz, my instructor mentioned that unlike American French people talk a lot about emotions. After viewing Non-Fiction I could not disagree more.

Based on the conversations about hard cover books, E-books and Audiobooks we find out that Alain Danielson (Guillaume Canet), a literary editor, has no intention of publishing the latest manuscript by Léonard Spiegel (Vincent Macaigne), a moody and shy writer with the looks of a sad Beagle. Alain takes Léonard to lunch but does not tell him of his decision. When Léonard bids Alain goodbye he asks him about the publication date, to which Alain replies that he assumed it was understandable that the novel will not be published.

We are also introduced to other characters: Selena (Juliette Binoche), Alain’s wife, a TV star that had a six-year affair with Léonard. She meets him for an early morning coffee, saying, without emotion, that the liaison is over; Laure (Christa Théret) a self-centered digital expert is having casual sex with men and women, while planning her next career move in London; Valérie (Nora Hamzawi), a political pollster does not share the news of her pregnancy with Léonard, her partner and the biological father, until the end of the first trimester. Léonard shows muted enthusiasm and asks if she is sure it is “his”. In contrast we meet Martin (Antonin Brehier), Selena’s son, who, in two short scenes, gives a joie de vivre performance which is a delight to watch.

Acting is spot-on in Non-Fiction. Juliette Binoche creates a believable portrait of Selena, a TV star who is tired of performing in TV police-dramas and wants to move into more meaningful roles. Guillaume Canet presents Alain as a distant and nonchalant character in his personal and working life. Upon discovering that one of his employees is making a career move to London he buys her a personal gift and hires a replacement even before being notified by her officially. Vincent Macaigne gives Léonard a resigned Que sera, sera attitude, assuming that most events in life are unpreventable. Two good supporting-performances are given by Christa Théret in the role of Laure, and Nora Hamzawi as Valérie.

Non-Fiction was filmed by Yorick Le Saux, with focus on local Parisian restaurants such as: Le Petit Saint-Benoit, Le Pure Café, and the locals of Yvelines and Hauts-de-Seine. The final part was photographed in the beautiful island of Majorca, Spain.

Story: B
Acting: A-
Technical: B
Overall: B+