Interview: Ira Steven Behr Talks What We Left Behind: Looking Back at Deep Space Nine (Exclusive)

Previous experiences are never truly over, as the past has a way of infiltrating the present and future. That’s certainly the case for the continued visionary take on the dark and edgy ‘Star Trek‘ universe, which has grippingly brought viewers into outer space for over half-a-century, through both numerous television and movie entries. ‘Star Trek: Deep Space Nine,’ which was the fourth series in the sci-fi franchise as it aired for seven seasons during the 1990s, is once again garnering mainstream attention, as its history is being explored in the new feature documentary, ‘What We Left Behind: Looking Back at Deep Space Nine.’

Ira Steven Behr, who served as the showrunner, as well as a writer and executive producer, on ‘Star Trek: Deep Space Nine,’ co-directed and co-produced the upcoming film with David Zappone. The movie presents an in-depth look at the past, present and future of a series whose dark, edgy take on creator Gene Roddenberry’s vision was often misunderstood when it premiered, but has grown into a beloved mainstay in the ‘Star Trek’ franchise.

The documentary features extensive new interviews with the cast and crew of ‘Star Trek: Deep Space Nine,’ as well as newly remastered HD footage from the television series. The original writers of the series are also shown as they crafted a brand-new episode of ‘Star Trek: Deep Space Nine,’ which would be the eighth season premiere if the show were to return to the air today. Following the feature presentation, a taped roundtable discussion with Behr? and Zappone, as well the film’s producers, will provide audiences with a comprehensive look at the making of the movie.

Behr took the time recently to talk about co-directing and producing ‘What We Left Behind: Looking Back at Deep Space Nine’ during an exclusive phone interview. Among other things, the filmmaker discussed that he decided to help make the documentary after Zappone approached him at a ‘Star Trek’ convention in Las Vegas, and asked him to help make a project that offers a new perspective on the third television sequel series to ‘Star Trek: The Original Series.’ The director-producer also expressed his happiness with Shout! Factory’s decision to show the film in theaters through their partnership with Fathom Events, as it allows viewers the chance to see the movie on a big screen before its eventual home distribution.

ShockYa (SY): You co-directed the upcoming documentary, ‘What We Left Behind: Looking Back at Star Trek: Deep Space Nine,’ with David Zappone. What was the inspiration in making a film about the legacy of the sci-fi television? What was the process of collaborating with David as co-helmers on the film?

Ira Steven Behr (ISB): I had never thought about making a documentary before. I have been interviewed for a number of docs, including a couple that were made by Dave and (his production company,) 455 Films.

I had gone to the Las Vegas ‘Star Trek’ convention in 2012, after not going to one since the show went off the air in ’99. I went to the one in 2012 because (series actor) Avery Brooks was going to be there, and I really wanted to see him. I hadn’t been in contact with him in all those years. So I went and we had a lovely reunion, and I got to see other castmembers who I also hadn’t seen in awhile.

As I was standing on the convention floor, Dave came up to me and said, ‘I’m thinking of making a ‘Deep Space Nine’ documentary. William Shatner isn’t going to be involved, because he’s done three ‘Star Trek’ docs in a row. So how would you like to be William Shatner, and interview the actors?’ It will be a one-hour documentary.’ I said, ‘I’ve never interviewed anyone before.’ He said, ‘Don’t worry about it, you’ll be fine.’ I asked, ‘What’s it going to be about? What’s the point-of-view?’ With a smile, Dave said, ‘Don’t worry, we’ll figure it out as we go along. That’s how you do documentaries.’

So thinking it was just going to be a one-hour doc, and without much further thinking, I said yes. But it’s now 2019, and we’re finally going to release the film to the public.

SY: ‘What We Left Behind: Looking Back at Star Trek: Deep Space Nine’ features extensive new interviews with the cast and crew of the television show, like you just mentioned. What was the process of bringing on the cast and crew for the interviews, and how did you decide what to ask them?

ISB: Well, since it was originally only to be a one-hour doc, I was just going to interview the actors at first. That’s the way Dave wanted me to do it, because he knew the actors would talk to me in a way that they wouldn’t talk to someone they haven’t worked with for seven years.

That experience was a lot of fun, but there was a learning curve at the beginning. As I looked over the transcripts of the interviews, I realized that I was talking way too much. But I got better as we went along. I interviewed a bunch of the castmembers together; I did that first with the main actors, and then with the recurring actors. I then interviewed the actors separately. That was fun, but I was also working on (writing and co-executive producing) ‘Outlander’ at the time, so I would disappear to Scotland for months.

We then had about a year’s worth of down time. Dave then went off to make the Spock doc (‘For the Love of Spock’), and I was busy working (on ‘Outlander’).

Then Dave got back in touch with me, and said, we need to do an Indiegogo campaign. I asked him why, and he said we needed the support to finish the film, including finding a composer. He also said we were going to do some animation for the writer’s room, so we needed $150,000. I asked him if we could make that amount, because I knew nothing about Indiegogo campaigns. He said that we would have a month to raise it, so he thought we could do it. We then ended up making the $150,000 in the first 29 hours. We wound up making well over $650,000, and ended up turning the project into a feature-length documentary.

SY: Speaking of the Indiegogo campaign, in addition to co-directing the documentary and serving as the showrunner on the TV series, you also served a producer on both projects. What was your experience producing both projects, and how did you balance producing with your helming and showrunning duties?

ISB: When Dave said we would find the film as we went along, what I didn’t realize at first was that I would find the film. Since he had made other documentaries, I just figured that I would be along for the ride. But the documentary crew told me was that it was all going to be on me, and from my point-of-view. I thought that wasn’t true, because I didn’t know enough about this type of filmmaking. But they were right, and I was wrong.

I realized that I had to own the documentary, just like I had to own the television series. I had to have a lot of the same creative ideas I had for ‘Deep Space Nine’ and other narrative shows for the documentary. I wanted the film to reflect the show, and have a creative vision. But we also had to do something that was going to surprise the audience, and tell the story in an entertaining and thoughtful way.

SY: Joseph Kornbrodt and Luke Snailham served as the editors on the documentary. What was the process of collaborating with them on editing the final version of the feature?

ISB: Well, that process was a shock at first, because we had well over 100 hours of interviews with the cast, as well as about six hours of the writer’s room. We also had all the fan interviews and submissions. So we had to go through all of this material, and figure out what story we wanted to tell.

We had index cards with us, so we could write down what the concept was for each segment. We would pin them to the boards we had set up, and move them around, in order to figure out the best way to tell the story. I didn’t want the story to be told chronologically, because I’ve seen so many documentaries recently that blandly stretch the events of the stories out in the order in which they happened.

So it took a lot of work to find the right way to tell this story. We changed it a lot of times, as we put things in and then took other elements out. Some of the material that isn’t in the final version of the film is going to be included in the special features section on the Blu-ray. Overall, the editing process took almost two years. During that time, we showed the cuts to fans and non-fans, in order to see how they would react.

SY: ‘What We Left Behind: Looking Back at Star Trek: Deep Space Nine’ is set to be released in theaters nationwide on May 13, courtesy of Fathom Events. How did the distribution through Fathom Events come about, and why do you think the theatrical release is beneficial for this type of documentary?

ISB: Much like everything else I’ve done, during the shoot, I didn’t really think about what was going to happen when the piece was finished. There’s always a big gap between when you make a show or film, and when it’s later shown to an audience.

Once we sold the film to Shout! Factory, it was really up to them what they wanted to do. I knew going in, after many conversations with Dave, we didn’t want to have even a limited, week-long theatrical release, based on his experience on the Spock film. It’s impossible to make money on documentaries in theatrical releases, so we might have lost money. We were still in debt, even after the Indiegogo campaign, because of all the HD we had to pay for during the production.

So we were thinking about the Blu-ray, DVD and streaming distribution. But then Shout! brought up the Fathom Events release. So we thought that would be cool, because it would be one showing in over 800 theaters here in America, and then in more theaters in Canada. They’re now also talking about showing the film in Europe.

So we thought that type of release would be fantastic. It’s better to see any film in a theater, no matter how great people’s systems are at home. I’ve very excited about it, and pleased that Shout! went in this direction. 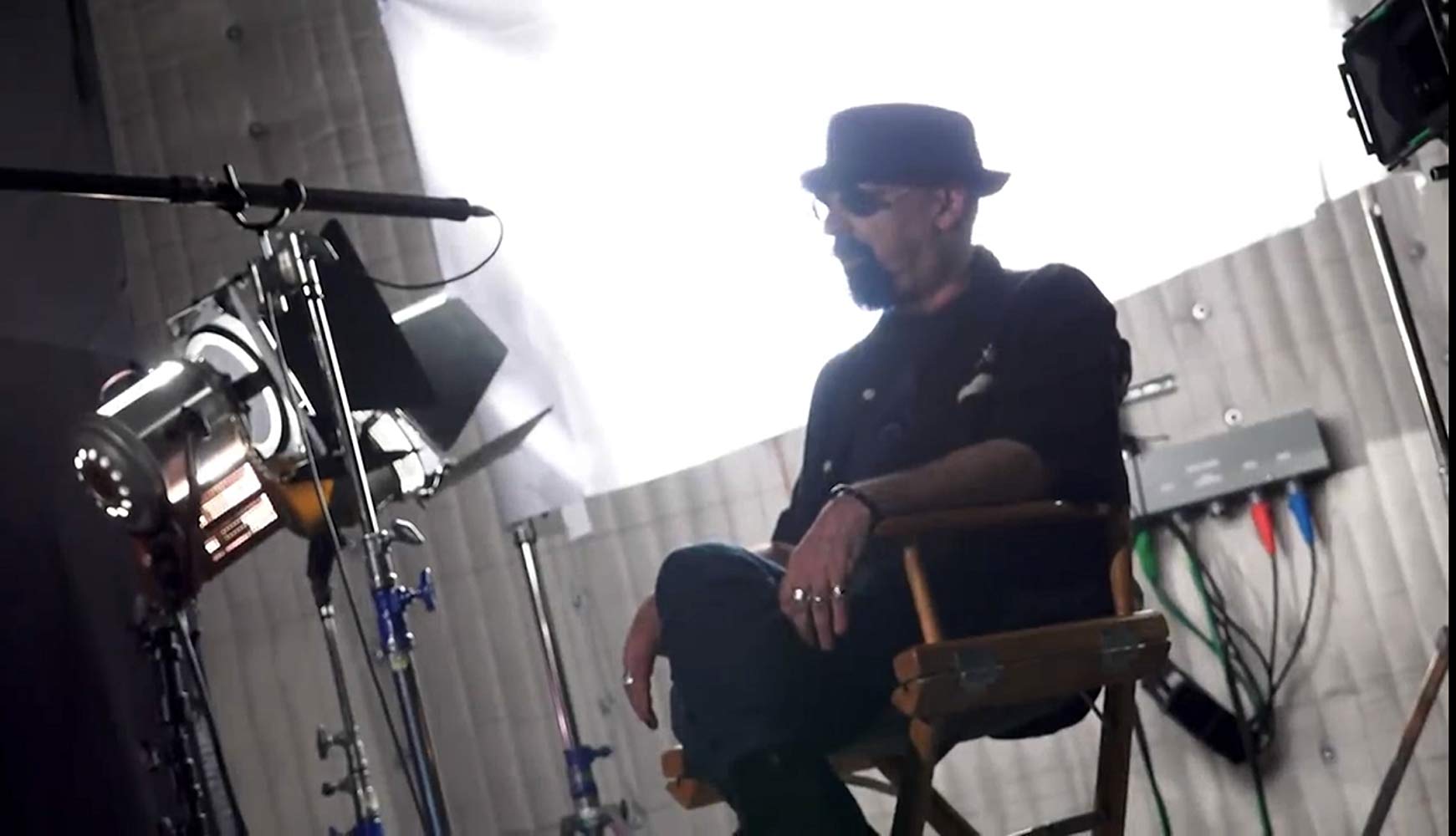 Name
Ira Steven Behr
Website
https://www.imdb.com/name/nm0066985/
Job Title
Co-director-producer of the documentary, 'What We Left Behind: Looking Back at Deep Space Nine'