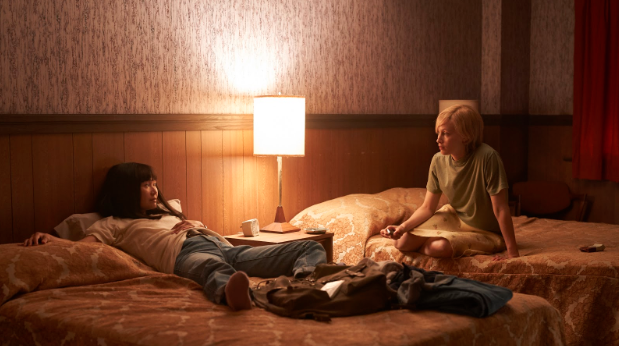 Infusing a thoughtful authenticity into politics as they unfold on screen is usually a challenging task. But the new drama, ‘American Woman,’ effortlessly explores the complex psychology of young, idealistic radicals from the 1970s. The story stunningly conveys the intensity and isolation of their precarious situation as they question their beliefs and alliances, as the Vietnam War comes to a close. The captivating characterizations of the politically-driven anti-heroes, whose actions helped spark a revolution 45 years ago, is powerfully presented on screen in an ever-timely and relatable way.

The movie was written by the Emmy Award-nominated scribe and producer of such shows ‘Mad Men’ and ‘The Romanoffs,’ Semi Chellas. She made her feature film directorial debut on ‘American Woman,’ which tell the fictional account of the real-life woman who spent time with heiress Patricia Hearst after she was abducted. Adapted from Susan Choi’s celebrated 2003 novel of the same name, the drama is a reimagining of one of the most astonishing segments of American history.

Set in 1975, ‘American Woman’ follows radicals in California who have kidnapped a young woman, the daughter of one of the wealthiest and most influential families in America, and, incredibly, converted her to their cause. In an isolated country manor in New York’s Hudson Valley, Jenny (Hong Chau) is working as a housemaid, but is forced to hold her tongue as her employer, Miss Dolly (Ellen Burstyn), comments scornfully on a live news report about the group.

But when a mysterious friend tempts Jenny with a risky proposal, there’s more to her than meets the eye. Jenny is, in fact, a fugitive, and is wanted for the bombing of a draft office in the ’60s. Ironically, she’s also a pacifist, whose principled rejection of the Vietnam War has brought her first to violent activism, and then into hiding. But now that the war is ending, she’s looking for a way to rejoin society.

Recruited to help the surviving radicals hide out in a secluded farmhouse upstate, Jenny is caught off-guard by the ethereal Pauline (Sarah Gadon), the kidnapped heiress reborn as a true believer. But the tension grows as Juan (John Gallagher Jr.) proves to be volatile, possibly violent, and Yvonne (Lola Kirke) to be calculating and unstable. As a tireless FBI agent, John Spivey (David Cubitt), closes in, and the truth of Pauline’s circumstances become clear, Jenny will face a watershed choice.

Chellas generously took the time recently during the 2019 Tribeca Film Festival to talk about writing and directing ‘American Woman’ during an exclusive phone interview. Among other things, the filmmaker discussed that she was drawn to adapt Choi’s book for the screen because she felt the outlaw story was cinematic for modern audiences. The scribe-helmer also cherished the opportunity to attend the movie’s premiere screening at the Tribeca Film Festival.

The conversation began with Chellas explaining how she began involved in writing the script for ‘American Woman.’ The process was very organic, since it’s adapted from the novel, and Choi is also one of the filmmaker’s oldest friends. “When she wrote the book, she showed it to me, and I was blown away. It really felt cinematic,” the scribe admitted. “It reminded me of outlaw movies I love, like ‘Bonnie and Clyde’ and ‘Thelma & Louise.'”

Choi finally persuaded Chellas to adapt the novel to the screen, so the filmmaker optioned the rights. “I then wrote the script, but that process was several years ago. Then some time went by, and then I found myself connected to some producers who understood my vision. It then came together last year, but the story still felt very timely, even after all of that time,” the screenwriter admitted.

Chellas also noted that the book is complex, and “is very internal to the central character, Jenny. She’s a very reflective character, and she doesn’t speak a lot. So some of that got lost in translation to the screen. So we had to find a way to show how she relates to these people, and can get to the bottom of this mystery and situation she finds herself in,” she pointed out.

Jenny “find herself in the position of having to take care of this heiress, who was kidnapped by this radical group, and they bring her into their radical cause. The question that arises during this process is, how real is this transformation? So I thought about how I would answer that,” Chellas explained. The scribe had to consider where the protagonist is a true believer now.

“As she finds herself drawn closer and closer to the situation, that question becomes more and more complicated, instead of more clear. That aspect stays true to the book, but we had to figure that out,” the filmmaker added. “The book is about the Patricia Hearst story, and the time she spent with this other woman underground, so I wanted to stay true to that aspect of the book.”

Besides basing the script on Choi’s novel, Chellas didn’t do much further research into Hearst’s story. “I didn’t set out to make a biopic; I wanted to make more of an outlaw story that was inspired by true events. But I did do some other reading, including ‘Anyone’s Daughter,’ which was written by a journalist (Shana Alexander) who was covering the trial of Patricia Hearst, after she was recaptured,” the scribe shared.

“This journalist was a young woman living in Los Angeles. During the trial, her own daughter ran away from boarding school, and was hitchhiking and doing drugs, so she couldn’t keep track of her,” Chellas explained. “The journalist then had an epiphany that this is what Patricia Hearst was on trial for; parents were getting mad at their kids for rebelling…and overthrowing the way that things had always been. So the journalist felt like Patricia Hearst was mirroring what going on in America.

“So I wanted to put that feeling into my movie. The FBI agent visits one of the characters after they’re put in prison. He was trying to figure out what was going on, and he said, ‘I need to know why these girls are so mad.’ That’s the question that frames the whole story,” the filmmaker further revealed.

The process of making her feature film directorial debut was also an experience that Chellas cherished while shooting ‘American Woman.’ She noted that she’s been a writer for 25 years, which taught her many lessons about filmmaking. “I had worked on this script for years, but when I then started to get the cast, as well as the cinematographer and production designer, they all saw things in the script that I didn’t even realize I put in there,” she admitted.

“I wrote this script the same way I always write, but as more people came on board, they brought their own visions. Once we got to the set, we stayed true to the script, but we also made changes, based on other people’s insights. The exciting part about directing is that the projects gets bigger and better than you,” the first-time helmer noted.

The experience of shooting ‘American Woman’ on location in Southern Ontario was one that Chellas also appreciated. “I really wanted to film on location as much as possible, but we didn’t have a giant budget. Since the story’s set in 1975, we had to find places that fit into that time period,” the Canadian filmmaker explained. “Surprisingly, we were able to find motels from that era, as well as the farmhouse where the characters were hiding out.”

In terms of the production design, the director pointed out that people in the ’70s weren’t rushing out to buy new furniture; they were living with the pieces they had since the ’50s and ’60s. For example, “the character who’s played by Ellen Burstyn has been living in the same house that her parents lived in since the early 1900s, so not much has changed. So we wanted to show that in the set dressing.”

Chellas also reiterated that the characters are fugitives, “so their wardrobes are very simple. So we had great costume designers who pulled clothing that were manufactured in the 1970s…which helped make the movie feel authentic and true to the time period.”

The casting process was also a vital one for the making ‘American Woman.’ The director especially cherished the experience of bringing Chau on board to play Jenny. “We met for coffee, and she started talking to me about the script, and how she also read the novel. She enjoyed the novel and story so much that she felt like she had to be a part of the film. By the end of our first conversation, she really understood the character of Jenny, maybe even more so than I did! She was telling me things that I never quite realized. So I left that first meeting knowing that she was right for the role, and we had an instant connection,” she shared.

Once Chau and the rest of the actors were cast in the drama, they spent some time rehearsing together. “For about two weeks, we were in this farmhouse, where a lot of the action takes place. We sat together and really talked about the story and the questions it raises. We also talked about the characters and who they were, and the world they were living in during the mid-’70s,” Chellas disclosed.

The experience of having ‘American Woman’ World Premiere in the Spotlight Narrative section at the Tribeca Film Festival was one that Chellas called “thrilling, but not what I was expecting. I was hit by a car” two days before the drama’s premiere screening, “and was ICU. I was very lucky that my injuries were minor, and was able to be released in time to go the premiere,” the filmmaker emotionally shared. “I feel very lucky. I’m thrilled to be premiering here at Tribeca, and am very grateful for the experience.”