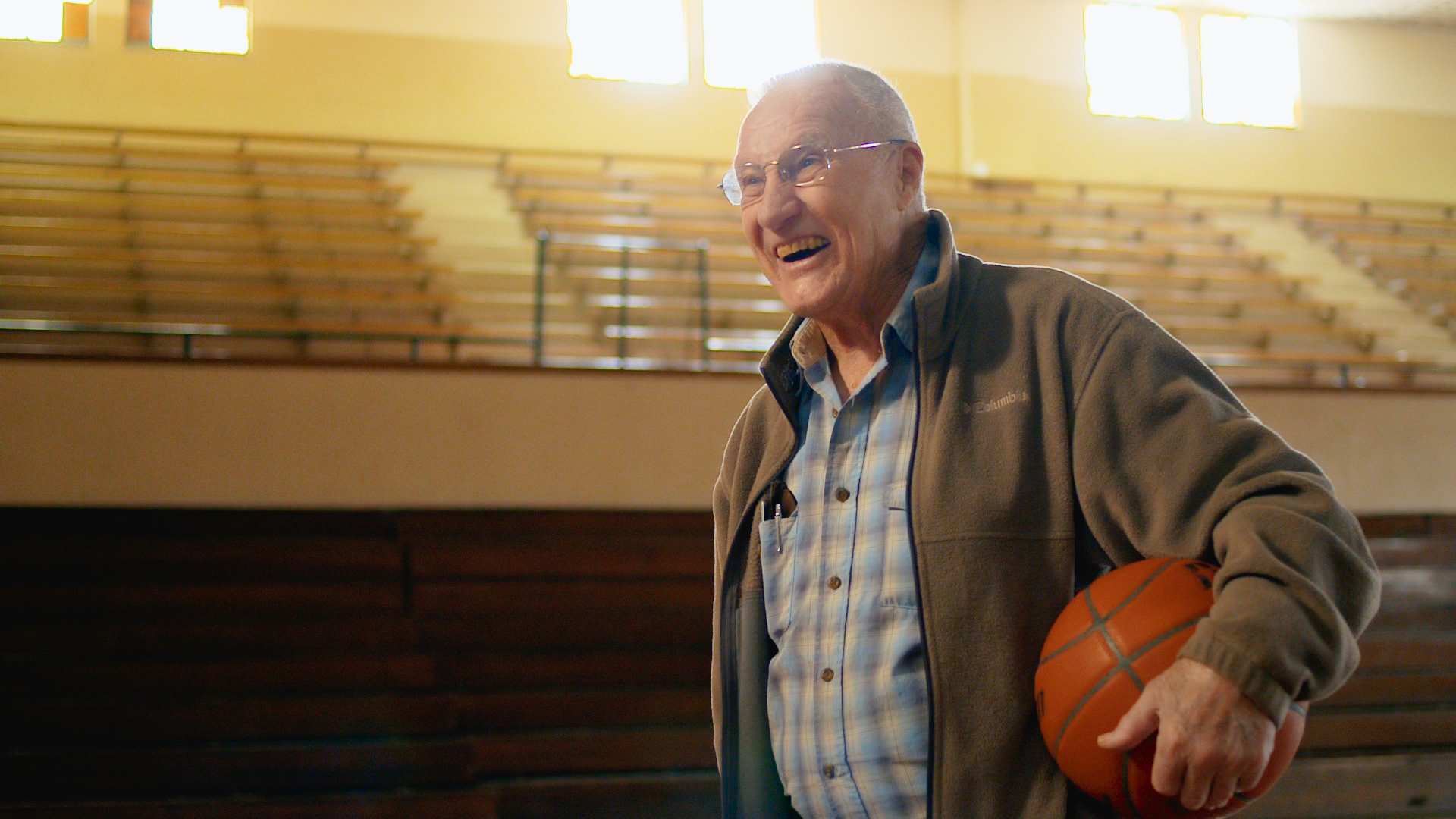 Developing, pioneering and popularizing a vital part of pop culture is an extreme feat that many people would gladly take the rightful credit for throughout their lives. But former NBA player, Kenny Sailors, is a humble legend who would seemingly prefer to care for his family and community than wholeheartedly embrace the experience of inventing the primary offensive weapon that helped define basketball: the jumpshot. The fact that he never allowed his creation to define who he is as a person throughout his life is showcased in the new sports documentary, ‘Jumpshot: The Kenny Sailors Story.’

First-time feature director Jacob Hamilton also served as the producer, cinematographer and co-editor on the movie. After hearing about, and doing research into, the former basketball star’s development, the helmer set out to emphasize how Sailors is the rare exception of not wanting to receive constant attention, especially in a society where self-worth is often driven by social media recognition. The all-star player, coach and teacher’s life is finally celebrated the right way in the film, which had its World Premiere in the Documentary Spotlight section at this spring’s SXSW.

‘Jumpshot’ shows how Sailors introduced his never before seen leaping one-hander play to the masses on a national level. During the process, he quickly grew to be a fan favorite, while he also led his team, the Wyoming Cowboys, to the Collegiate National Championship in Madison Square Garden in 1943. But after later playing on several losing teams in an unstable, emerging league now known as the NBA, Sailors disappeared into the Alaskan wilderness, and was eventually forgotten by the sport he helped pioneer. Now, nearly sixty years later, the multitude of people he has touched along the way have forced the former basketball player’s humble reemergence.

Hamilton generously took the time during SXSW 2019 to sit down for an exclusive interview at the Intercontinental Hotel in Austin to talk about serving as the director, producer, co-editor and cinematographer of ‘Jumpshot.’ Among other things, the filmmaker discussed that he was drawn to direct a feature documentary about Sailors’ life and career after hearing his story on NPR, and becoming captivated by his story. The helmer also expressed his gratitude that the feature premiered at his hometown festival, after the 2013 short film it’s based on, ‘Kenny Sailors: Jump Shot,’ also screened at SXSW.

The conversation began with Hamilton explaining why he was interested in making ‘Jumpshot.’ “The first time I came across Kenny Sailors’ story was on an NPR program called ‘Story Corps.’ It was a two-minute interview clip, during which Kenny talked about the first time he jumped over his taller, older brother, and how he was also benched in the NBA when it was first founded for trying to do his jumpshot. I was immediately captivated by him,” the director shared. “I thought, oh my God, this guy created the jumpshot? It never existed prior to this? So I was immediately hooked.”

As Hamilton then started to do more research on Sailors, “I learned that he was alive, and still living in Wyoming. I was like, I have to go meet this guy, and learn more about his story, who he is and what he believes in,” he disclosed. “So I went out there and we met over breakfast,”

the filmmaker added that “When we first met, Kenny said that basketball and the jumpshot is all anyone wants to talk about when they meet me. I feel like there are a lot of other things that are more important. I told him that was actually the movie that I wanted to make, and obviously, basketball is going to be a big part of the film. That’s the common threat that we’re going to take to get through all of these chapters in his life.”

But it was also important to Hamilton that audiences see who Sailors was as an overall person, and not just who he was as a basketball player. “I wanted to also show the father, husband, man of faith and Marine, all of which make him who he thinks he is,” the helmer further emphasized.

Once people started to hear about what Hamilton wanted to do with the documentary, “we made contact with the people we eventually interviewed, who helped fill out his story,” he shared. “But this has been a long process overall; we started the project seven years ago. A lot of amazing people have come together to make an incredible film about Kenny.”

In addition to the basketball legend, the filmmaker was also able to spend time with Sailor’s family, including his son, “who still lives in Alaska, where Kenny spent a good portion of his life. We were also able to spend time with his grandkids, who grew up around Kenny and his wife in Alaska, and also had amazing stories to share. We were able to hear what their grandparents’ legacy means to them, as a family.”

In addition to speaking with the former basketball player’s family, Hamilton also reached out to such networks as ESPN and CBS, which have featured Sailors in “short broadcast clips or pieces. We also reached out to Sports Illustrated, which also wrote about him.” The director also spoke to the former basketball player’s friends, as well as more current NBA players, including Steph Curry snf Kevin Durant, and such broadcasters as Clark Kellogg and Nancy Lieberman, who all chimed in about the jumpshot inventor’s legacy.

The filmmaker then delved into what the experience of balancing his duties as the helmer and cinematographer was like for ‘Jumpshot.’ He has mainly worked as a Director of Photography “to make a living over the past seven years while I made my directorial debut on this movie. Working as both a director and cinematographer have allowed me to sharpen my skills as a filmmaker, and know what works best for a scene. There are definitely challenges in both directing and serving as the cinematographer on the same project,” he admitted.

“In a perfect world, I would have had camera operators, and I could sit back and look at everyone sand say, ‘Let’s look at this and this.’ But a lot of the time, it ended up just being me behind the camera, and trying to figure out what worked best for the story with one just camera,” Hamilton disclosed. “We tried to use shots of Kenny interacting with his friends and family, so that the audience could truly see those interactions.”

The director also spoke about the experience of serving as one of the producers on ‘Jumpshot.’ He noted that he had “an amazing team of producers who worked with me to help complete the project. We wouldn’t be here today, premiering at SXSW, if they weren’t a part of the team. My role as a producer was more about keeping the project alive all these years, before everything was set in place,” he revealed.

“This has been a passion project of mine that I’ve been trying to get out into the world, so I had to wear multiple hats to keep it alive. So producing was a job I had to step into as a documentary filmmaker, because no one else was going to work as me to make the film stayed alive. But I’m thankful that there were other producers who helped drive it along,” the producer also shared.

In addition to directing, shooting and producing ‘Jumpshot,’ Hamilton also cherished the opportunity to also co-edit the movie with Grant Myers. But as he noted, “With documentary filmmaking, the editing approach is different than with narrative filmmaking. For a narrative, you film X, Y and Z, and you connect those elements in chronological order. But with documentary filmmaking, you can tell the story in a million different ways.”

The editor admitted that “It took us a decent amount of time to really figure out exactly how we wanted to share this story, especially the pacing and structure of it. We had an amazing team of story consultants who helped us figure out what our story would be for the film.” He also revealed that the materials he had for the documentary initially weren’t completely organized. “So we lost a lot of time, having to go back and restructure and reorganize different things. But once we reorganized, even down to labeling archival clips, it made things a lot easier. So we were then able to easily search names and dates to find clips that we needed to fit into our timeline.”

Hamilton also called the experience of premiering the documentary at SXSW “a dream come true. We actually screened a short film version of ‘Jumpshot’ here at SXSW, so I feel like we’re coming full circle now, as we’re premiering the feature-length version of the film here, which we hoped to accomplish one day. It’s such an amazing experience to be able to premiere here at SXSW in Austin, which is my hometown; I’ve lived here for a decade now. I’m amongst friends and family here. I have been coming to SXSW for years, so it’s great to finally have a project here that’s mine!”