It can often take a harrowing situation to encourage people to embark on a heartfelt celebration of their families, and learn to truly appreciate the relationships they have with their relatives. The powerful realization that everyone needs to cherish their family members is grippingly presented in the new comedy-drama, ‘The Farewell.’ The feature masterfully interweaves a humorous and emotional depiction of the lengths people go to in order to protect their loved ones with how family can strengthen everyone, often in spite of themselves.

The sentimental, heartfelt movie had its premiere in the U.S. Dramatic Competition section at this winter’s Sundance Film Festival, where A24 acquired worldwide its distribution rights. The comedy-drama also screened at such festivals as the Los Angeles Asian Pacific Film Festival, the San Francisco International Film Festival and the Seattle International Film Festival, before it was released in select screens in the United States last Friday, July 12, and expands to more theaters today. During its opening weekend, the feature earned the highest per-screen average box office of any movie this year.

‘The Farewell’ follows Chinese-born, U.S.-raised Billi (Awkwafina), who reluctantly returns to Changchun to find that, although the whole family knows their beloved matriarch, Nai-Nai (Shuzhen Zhao), has been given mere weeks to live, everyone has decided not to tell Nai Nai herself. To assure the happiness of Billi’s grandma, her relatives gather under the joyful guise of an expedited wedding, which unites family members scattered among new homes abroad. As Billi navigates a minefield of family expectations and proprieties, she finds there’s a lot to celebrate: a chance to rediscover the country she left as a child, her grandmother’s wondrous spirit and the ties that keep on binding, even when so much goes unspoken.

Actor Tzi Ma and actress Diana Lin star as Haiyan and Jian, the parents of Awkwafina’s strong-willed, yet equally relatable, protagonist in ‘The Farewell,’ which was written and directed by ‘Posthumous’ filmmaker, Lulu Wang. The semi-autobiographical story in the scribe-helmer’s latest feature is based on the journey she and her family went on together, following the diagnosis of her grandmother’s illness.

Ma and Lin generously took the time recently to talk about starring in ‘The Farewell’ during an exclusive phone interview. Among other things, the performers discussed that they were drawn to star in the comedy-drama because they cherished Wang’s abilities as a filmmaker, as well as the rare opportunity to to work in China with a predominately Chinese cast. The duo also praised Awkwafina’s talent as a versatile, dedicated and caring actress, and noted their enjoyment of collaborating with the up-and-coming star.

ShockYa (SY): You both portray the parents of Awkwafina’s character, Billi, in the new comedy-drama, ‘The Farewell.’ What was it about the project that influenced you to star in the movie?

Tzi Ma (TM): Well, this movie has a wonderful story. It’s also a rare opportunity to work in China, at least for me, and collaborate with a predominately Chinese cast, which excited me. The story itself is also compelling, as is Lulu.

Diana Lin (DL): For me, it was important that Lulu is a great filmmaker. The plot’s based on her own family’s story, and it’s an amazing one. Overall, everyone we worked with are so talented.

SY: Speaking of working with Lulu, what was your experience like of collaborating with her as the film’s writer-director?

TM: It was an advantage that she was the writer-director, because we got two for the price of one! (Lin laughs.) A lot of times, the writer’s not around, so you have to find, and consult with, him or her, but we didn’t have to do that.

Also, the fact that Lulu made it so easy for us, in terms of her preparation, was helpful. We had access to her family, and they were generous with us, and gave us their time. That experience was unprecedented for me.

DL: Yes, that was really helpful. We got everything we needed, in terms of the inspiration for our characters. So we were easily able to transform into a family!

TM: Yes, I’m totally in love with Diana now! (The two laugh.) The whole experience was totally unprecedented for me, and I really enjoyed it.

SY: What was the experience of working together and with your co-stars? Where you able to have any rehearsal time together?

TM: Well, with Diana and I, as well as most of the rest of the cast, had Lulu’s family present with us where we were shooting in Changchun (the capital and largest city of China’s Jilin Province). We did have some rehearsal time; we rehearsed before we shot our scenes, and also had a read-through. So it was the normal process, and there wasn’t anything special that we needed to do. The fact that we had Lulu’s family present there with us was an advantage that most actors don’t have.

DL: The rehearsal time wasn’t a big thing for us. But I did spend time with Lulu’s mom and grandma, and we talked about their relationships. I got a lot of information from just talking to them. We also spent a lot of time having meals together; we went to restaurants, and bonded when we went out. So we became like a family.

TM: Yes, we were like a family. That’s an opportunity that’s not often afforded to us as actors. So it was a unique situation; we spent pretty much our entire day together as a family.

The family was so generous; there really wasn’t anything that we asked of them that they shied away from, or weren’t compelled to share with us. They were so open with us. Like Diana would say, we probably know more about Lulu then she knows about herself. (Lin laughs.) Everyone was so supportive of the entire project, and they made life easy for us.

We had the opportunity to really understand the nuances and explore the subtexts. I think there are a lot of subtleties in the story that audiences may initially take at face value. But I think that the audience will pick up on our chemistry.

SY: What was the experience of also working with Awkwafina, in particular, like, as you built the parent-daughter relationship with her on screen?

DL: I think Awkwafina’s a talented young girl. She’s very smart, and the way she learned Mandarin (which, along with English, was spoken in the film) was amazing. She’s also very easy to get along with, and she has a great, big heart, and is genuinely lovely. So we really became a family.

TM: We caught her before the avalanche of praise she’s been getting recently. (Lin laughs.) She’s great. We’re both from New York, so we bonded over that. She also told me that I remind her of her dad. So we really got along from the beginning, which was exciting.

SY: Once you began shooting ‘The Farewell,’ did you and your co-stars improvise at all, or did you many stick to the script that Lulu had written?

TM:There really wasn’t much improvisation. Lulu knows the story so well that she guided us in our scenes. There was some leeway, but many of the decisions were made before we started shooting.

SY: Like you mentioned earlier, Tzi, the comedy-drama was shot in Changchun. What was the experience of filming in the Chinese city like for you both?

TM: Well, Diana’s from the area, so she had a ball! (Ma laughs.) She got to visit her family, but for me, it was an all-new experience.

DL: It was great to be able to film there! I grew up there, but I left almost 30 years ago. But I enjoyed going back to all the restaurants, and hanging out with all of the local people. It was exciting to go back.

TM: As actors, we’re always curious. So when you visit somewhere you’re not familiar with, you visit places that the locals go to, and do what they do. In Changchun, the food’s a little different, but the people are warm, open and straight-forward. The town is interesting; the places we stayed at were actually predominately German, because they have a lot of Audis and Volkswagens. So it almost felt like we weren’t in China, and actually in Germany! (Lin laughs.) But it was a lot of fun to be able to spend time in an area that wasn’t a major city, which was a really welcome change.

SY: ‘The Farewell’ played at this year’s Sundance Film Festival. What was the experience like of being able to bring the comedy-drama on the film festival circuit

TM: We were very fortunate, obviously, because the audiences seemed to really enjoy the film. I think we should have made a deal with Kleenex, which we didn’t do, because we would have made a ton of money! (Lin laughs.) We kept handing out tissues. It was so well-received, and we’re getting so much love from everywhere. It’s great, and really good for the ego! (Ma laughs.)

SY: What do you both hope that audiences can take away from the movie?

DL: I hope that people will bring their families, no matter what nationality they are, to see the movie. The story’s all about the love of family, which is so important.

TM: Also, this movie is rare in this business, as it’s predominately Chinese-speaking. So if you’re talking about recent immigrants who speak Mandarin, how often do they get to see a film, in a main-stream theater, where they get to understand what the story’s about, without their children explaining what’s going on?

The fact that they finally have an opportunity to see a film in a main-stream theater is great, as the movie’s intended for them. I can’t think of any other film in recent memory that comes close to offering that.

I also don’t think another film is going to address immigrants in the same way anytime soon, so I think this is a rare opportunity. I think the fact that the parents can go out on a date night is a welcome change. We know that the general audience will like it, too, because we felt that in all the festivals.

DL: Yes, we had people tell us that certain characters reminded them of their moms. They came from all cultural backgrounds, but have the same connections with their moms, which is rare. This movie is really unique, and was beautifully made. 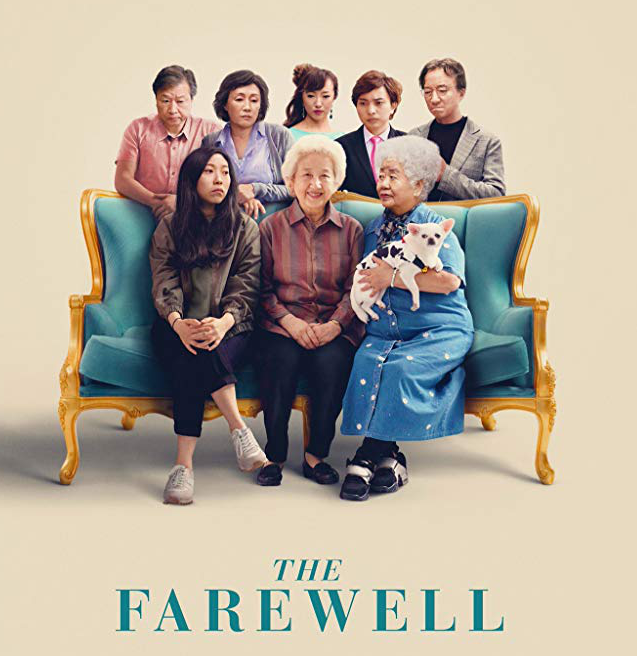