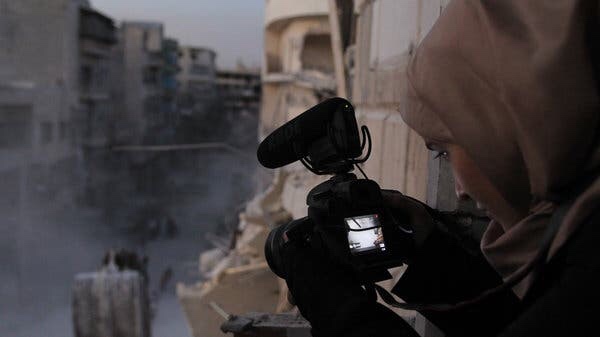 A woman I met in New York City told me a story. After spending the first five years of her life in Baghdad, Iraq she moved with her family to Tehran, Iran. After political unrest in Tehran the family moved to Istanbul, Turkey. She never lived in any city more than a few years and moved from Istanbul to Cape Town, South Africa and from there to Toronto, Canada and Sydney, Australia. After acquiring a legal status in the U.S.A. she moved from New York City to Atlanta, Georgia. One Saturday afternoon, while waiting for my connecting flight in Atlanta airport, I called her and was told that: “Meg does not live here anymore”. The point here was that Meg resided in many cities but never lived in any. Once she “finished” a city she would move to another.

The narrator of “For Sama” presents a different situation of a young Syrian woman. Waad (Waad al-Kateab) grew up in Syria and went to the University of Aleppo in 2011. Aleppo, was the second most important city in Syria, located within twenty-eight miles from the Turkish border. In Aleppo she met Hamza (Hamza al-Kateab), a young doctor. Their romance blossomed so they got married and had a daughter, Sama (Sama al-Kateab) in 2016. This film is dedicated to Sama. Wadd and Hamza made a difficult choice to stay in Aleppo since he wanted to help the injured and the dying, during the Syrian government siege (2011-2016), and set-up a new hospital after the previous one was destroyed during Russian air strikes. Sama lived with her parents in the hospital for a year before they were forced to flee to the U.K. in 2016.

For Sama is a heart-wrenching documentary that captures the daily life of the Hamza family in Aleppo during the Syrian conflict. Some of Wadd’s personal experiences photographed here include: a successful attempt to revive the limp body of a child born dead; a surreal wedding scene of Wadd and Hamza dancing to the tune of Patsy Cline’s “Crazy”, while planes loaded with explosives hum in the sky; and a wailing mother carrying her son’s dead body in the bombed streets of Aleppo.

For Sama was edited in a non-chronological order by Chloe Lambourne and Simon McMahon. The film was photographed with a hand-held camera and a cell phone by Waad al-Kateab. Her mournful narration in Arabic and English can be heard throughout. Co-directing was done by Edward Watts, also known for Escape from ISIS and The Mega Brothel. Excellent English subtitles were provided in white with black background.

Story: B+
Acting: B
Technical: B
Overall: B+