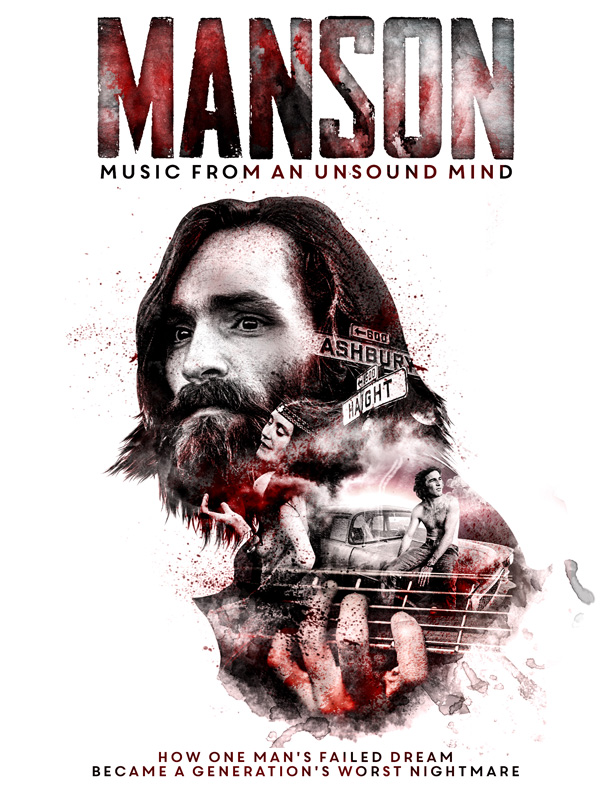 The poster for writer-director-producer Tom O’Dell’s documentary, ‘Manson: Music From an Unsound Mind.’

Being able to pursue a long-cherished goal is one of the appeals of the American dream, even for those who live on the fringes of society. That insatiable quest was even-and especially-true for infamous California cult leader, Charles Manson, throughout the 1960s. The late convicted criminal’s journey of obtaining success as a musician in Los Angeles is chronicled in the new documentary, ‘Manson: Music From an Unsound Mind.’

In honor of the movie, which looks at the little known part of the life of the title leader, now being available, ShockYa is premiering an exclusive clip from the feature. In the clip, Gregg Jakobson, who was a close friend of Dennis Wilson, recalls how he saw Manson at The Whisky a Go Go on the Sunset Strip. Jakobson, who was at the West Hollywood nightclub with the late co-founder of the Beach Boys one night in the 1960s, saw the packed crowd give Manson space on the dance floor so that he can dance alone. Jakobson noted that during Manson’s performance, he seemed to be radiating electricity that couldn’t be rivaled.

‘Manson: Music From an Unsound Mind’ is being released today on all major VOD platforms, including iTunes, Amazon, GooglePlay, Vimeo and FandangoNow, as well as such US cable platforms as Comcast, Cox, Spectrum, Dish, Verizon and Frontier, by Vision Films. The documentary was directed, written and produced by Tom O’Dell.

“I first found out about Manson’s musical ambitions back in 2007, while producing a Byrds documentary,” O’Dell has said. “It was an unbelievable backstory to a case I thought I understood. We’ve gone back and have interviewed those who were actually there, who believed in Manson’s talent and were appalled by his transformation into a monster. The revelations in this film make the Manson myth more real, more complex and ultimately, more tragic.”

To get a better understanding of Manson, O’Dell interviewed Manson Family member Dianne Lake, who joined Manson’s cult at just 14-years-old, and was arrested with him two years later; Jakobson, who was Wilson’s song-writing partner, and became Manson’s closest ally on the L.A. scene, before coming a key witness for the prosecution at his trial; Manson’s fellow inmate from 1966, Phil Kaufman, who would release the cult-leader’s only ever album; Beach Boys producer Stephen Desper, who recorded Manson at Brian Wilson’s home studio; and Ernie Knapp, the guitarist in Manson’s only ever band, The Milky Way.

Vision Films has unveiled the following synopsis for ‘Manson: Music From an Unsound Mind’:

When career-criminal Charles Manson was released from prison in 1967 after a ten-year stretch, he headed straight into the heart of San Francisco during the Summer of Love. He had one goal – to become a rock star. The film follows Manson’s journey from the Haight-Ashbury to the Sunset Strip, recording sessions in Hollywood’s most illustrious studios and auditioning for the most powerful figures in the music industry. It reveals the untold story of his musical ambitions, his close friendship with Beach Boys drummer Dennis Wilson, and the fear and pain that spread through his Los Angeles contacts once they discovered the darker side of the man they called “The Wizard.” As Manson’s dreams fell apart, it would lead to his descent into violence and chaos.